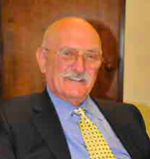 As president of both the Oregon Area Jewish Committee and Income Property Management, the company he founded in 1974, Jeff Reingold is aware that human rights and social justice are of paramount importance. Reingold started his two-year term on the OAJC board in June. But the OAJC’s social justice priorities have long been on his radar.

For the past decade, the USDA has ranked Oregon near the top of the list for food insecurity. Oregon often ranks among the 10 hungriest states in the nation.
“That people have to choose between food and medicine is antithetical to all we as Oregonians and Jews stand for,” says Reingold. “People aren’t as aware of (hunger) as they should be, and elected officials aren’t doing enough.”

Reingold was born in Portland to Marion and Richard Reingold, z’l. A graduate of Sunset High School, Reingold earned a fine arts degree from the University of Oregon in 1973. While still in college, he bought his first house in Eugene with his father’s assistance.

“The math seemed good, so I kept doing it,” he says, noting there was a need for rental property in Eugene. The year after he graduated he started IPM in Eugene.
Now he uses the experience he gained managing his own properties and taking real estate management courses to ensure IPM “helps clients gain maximum value for their real estate dollar while providing quality spaces for tenants to live and work.”

In 1979 Reingold completed the requirements needed to obtain his designation as a Certified Property Manager from the Institute of Real Estate Management. In 1981 the firm met the institute’s strict requirements for designation as an Accredited Management Organization – one of only 620 in the country.
“I enjoyed property management; I still do,” he says.

In 1984 he expanded the business to Portland. Currently the firm serves as managing agent for more than 6,000 residential units and about 700,000 feet of commercial space in Oregon and Southwest Washington.

He attended Congregation Beth Israel growing up, but when he and his wife, Francine, moved to Portland, they joined Congregation Neveh Shalom, where their sons, Jonathan and Jacob, became b’nai mitzvah. Now 31, Jonathan, an attorney, and his wife, Lauren Fine, live in Seattle. Jacob, 25, just returned from teaching English in Oman for two years.

Reingold says he was invited to join OAJC 10 years ago by board member Miles Newmark. “Frankly, once I found out the work (that) needed to be done, I’ve been pleased to be able to do it,” he says.

OAJC policy initiatives focus on economic equality/hunger, equal rights/marriage equality and anti-Semitism/Israel advocacy. OAJC works to ensure that the public and elected officials are aware of the prevalence of food insecurity and the far-reaching effects of hunger on educational and economic outcomes.

In terms of marriage equality, it really all comes down to fairness – and that is the argument the OAJC made in its amicus brief to the Oregon Supreme Court, says Reingold.

Born the same year as the modern state of Israel, Reingold says, “As a Jew who’s lived 65 years, I’m seeing things in the world I never thought we would see again.”

The worldwide increase in anti-Semitic violence and the resurgence of neo-Nazi parties in Europe are a trend that Reingold, and many Americans, believed would never rise again. The OAJC in conjunction with the Community Relations Committee, the Jewish Federation of Greater Portland and the Oregon Board of Rabbis recently issued a policy statement in support of Israel’s reaction to rocketfire from Gaza.

“(W)hile we yearn for an enduring peace and an end to this violence, we also urge international diplomats to continuously remind the world that there is no moral equivalence between Hamas’ deliberate targeting of civilians and Israel’s military response in self-defense,” reads the joint statement.

In addition to “providing a needed voice for the Jewish com- munity on these three issues forcefully and cogently,” Reingold says OAJC also provides programming specific to these issues. The OAJC’s annual Yom Hashoah programs ensure Americans, and especially young people, are aware of the dangers of anti- Semitism. The most recent Lunch and Learn program focused on “Facing Race.” And the annual interfaith seders promote cultural and interfaith ties.

“OAJC has benefited from Jeff ’s generosity and passion for making a difference for over a decade now,” says OAJC Executive Director Joanne Van Ness Menashe. “I am personally fortunate to have had great board leadership in my first year as executive director and am looking forward to working with Jeff in his new role as president in my second year at the helm. Jeff has many great qualities, including clarity of vision, and he is guided by a deep sense of commitment to OAJC’s mission.”
Reingold’s IPM was one of the first companies to step up as a sponsor for the Oct. 29 event.

“Our company works quite a bit with nonprofits,” says Reingold, noting he also serves on the board of Cedar Sinai Park. “Both Francine and I have had family members residing there,” he says, calling CSP a great resource in the community. “What a safe refuge.”

Since IPM manages some affordable housing units, Reingold says he hopes he will be able to uses his experience in that sector to help CSP make informed decisions regarding the four afford- able housing buildings it owns in downtown Portland.

Whether at work or on volunteer boards, Reingold knows how to combine passion, vision and experience to make a difference.

Judge Learned Hand Award Luncheon Oct. 29
Oregon Attorney General Ellen F. Rosenblum will be the keynote speaker at the Oregon Area Jewish Committee 2014 Judge Learned Hand Award Luncheon. The Lifetime Achievement Award will be presented to Lisa Kaner of Markowitz Herbold Glade & Melhaf, PC. The Community Leadership Award goes to Amy Edwards of Stoel Rives, LLP. Since this is the first year both honorees are women, Rosenblum will focus her comments on current issues facing women, including the “equal pay” amendment.
The OAJC Judge Learned Hand Award honors the memory of Judge Billings Learned Hand, who was recognized as a jurist, philosopher and poet of liberty. Judge Hand was appointed by President Taft as U.S. District Court Judge for the Southern District of New York. The event will be at 11:45 am-1:15 pm, Oct. 29, at the Benson Hotel Mayfair Ballroom. For ticket information, visit oajconline.org.