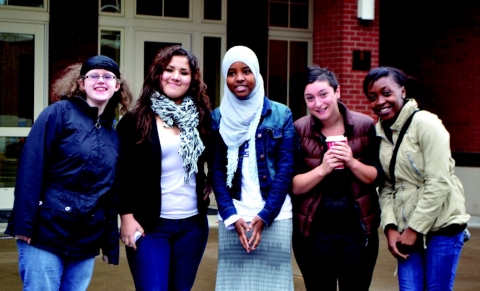 “We have a special obligation from our history and our perspective as Americans and as Jews that should align us with the interests of immigrants and make us struggle against anti-immigrant sentiment.”
Strong words, but if you want wishy-washy talk about this controversial subject, don’t ask Portland resident Rebecca Shine what she thinks or those are the words you’ll hear. “We have created this whole morality about migrating. People migrate, animals migrate. They go where the resources are, where safety is. We can’t say ‘it shouldn’t happen.’ We should figure out how to make it sustainable for the people here and for the people moving here.”

Her commitment is total, and the values that shape that commitment extend to all who are underrepresented and marginalized. And she believes now is the perfect time to empower these communities.
“You can be elected president of the U.S. with only 39% of the white vote,” she points out. “Look what can happen when disparate groups work together.”Rebecca grew up in Los Angeles, the child of successful parents who taught their children social responsibility and encouraged them to push themselves to achieve their goals. Rebecca graduated from Lewis and Clark and then got a master’s degree in public administration, focused on nonprofit management and community development. With Portland as her new – and, she says, “forever” – home, Rebecca hung up her shingle consulting for nonprofits and government agencies on economic development, social services and youth programs.

In 2005 she and her partner, Anne Galisky, a building contractor, took a documentary film course. They were both passionate about social justice and wanted to learn how to tell stories that could inspire conversation and motivate change. The result was “Conversation Is Interruption,” a 10-minute video about how culture shapes conversation. It featured nine Portland-area Jewish women, including Rabbi Ariel Stone of Congregation Shir Tikvah. Rebecca and Anne loved filmmaking, and they formed Graham Street Productions in 2006, but they had to return to their day jobs.

“Why do they hate us?” The question came from Cesar Pineda, a young, undocumented student riding in the passenger seat of Rebecca’s car. Rebecca was tutoring in the Step Up Program at Roosevelt High School. Designed to retain and educate the kids most at risk for dropping out, it connected each youth with an adult who would be tutor, mentor and advocate. Rebecca met Cesar and many others while volunteering with this program. “The Jew in me was moved,” she remembers. “I had no answer. Do I get why people would rather dehumanize others rather than work with them and solve the problems at hand? They were grief struck. I was grief struck.” And she was galvanized into action.

Rebecca and Anne fired up their film company and began work on what was to become the “Papers” documentary and then much, much more. To do it, they obtained some grants and raised money with 1,400 small donations from 22 states. Rabbi Daniel Isaak of Congregation Neveh Shalom was an early supporter. “People have to know these kids the way you know them in order to help them,” he advised. He wrote in the congregation’s newsletter, “This is a truly Jewish film.” “Papers,” like “Conversation,” used interviews and discussions, this time with five youth who were brought to the U.S. as small children and, although raised as Americans, are not entitled to many basic rights and privileges because they are without papers. The project had two primary, equally important goals: to educate, engage and empower the youth who worked on the film crew and to stimulate meaningful dialogue.

The documentary was incredibly successful. Today it is shown on college campuses and in art houses all over the country. “Youth see kids telling the truth about their lives and they say, ‘This is our story,’” Rebecca says. “They stand up themselves, see allies standing around them and get bolder about making their case.” The momentum of “Papers” spawned The Student Alliance Project (SAP), whose mission is to cultivate a youth-led community of diverse young leaders who build self-confidence and trust, achieve their goals and become advocates and allies for social justice. They build on the support of diversity that came out of “Papers.” According to their website, SAP is made up of “undocumented, immigrant, LGBTQ, indigenous and low-income, students of color, students with disabilities, youth in foster care, teen parents and their allies.”

SAP itself led to the formation in July 2012 of the Momentum Alliance, a 501(c)(3) to house SAP and other new programs. Its bylaws require that 51% of its board be youth 25 and younger. The six adult board members are themselves a diverse group: John Duke, clinic director of Outside In and a member of Havurah Shalom; Karen Belsey, associate director of Open Meadow and a member of P’nai Or; Christina Thacker, an employment lawyer at Barran Liebman LLP; Gabriele Ross from the Evergreen School District, who works with incarcerated, homeless and undocumented youth; Tony Domingue, football coach at Roosevelt; and Joaquin Lopez, a musician and co-owner of La Bonita restaurant. “We are a community resource,” Rebecca says. “Lewis and Clark will ask for a young person to speak to psychology students about working with youth. Oregon Students of Color Coalition asked for our workshop on how to build alliances among Muslim, undocumented, and gang-affected youth as well as youth with disabilities. We did training for the National Association of Social Workers. We are making progress.”
Funding is always a potential roadblock, and, while it is still a huge challenge, SAP has had support from key local foundations as well as from individual donors. Among them is the Oregon Jewish Community Youth Foundation.Oscar Tzintzun, 17; Natalie Lerner, 16; and Vanessa Dominguez, 17, all active in Momentum Alliance, sat proudly at a table while their program was given a grant at the OJCYF annual dinner last spring. When it was time for the Mitzvah Moment, all three raised their own paddles to support OJCYF programs.“Youth groups need to have other youths’ backs, even if it’s just with $18,” Vanessa says. “Giving is better than getting,” says Oscar. “I want to return the favor and help other organizations that are working to make the world a little better,” adds Natalie.

“I love tzedakah,” says Rebecca, using the Hebrew word often translated as charity but which literally means justice. “But we are not either givers or receivers. We all have something to learn and something to teach. Then the power becomes more equal.” “There is a role for Jewish people in this changing country,” says Rebecca. “Who do you want to be? Be the people who dig in their heels and resist this change? Or do you want to be in the future of America, be an ally? Have their backs and they have yours. “I want to see Jews help contribute to this future because these are fundamental Jewish values.”