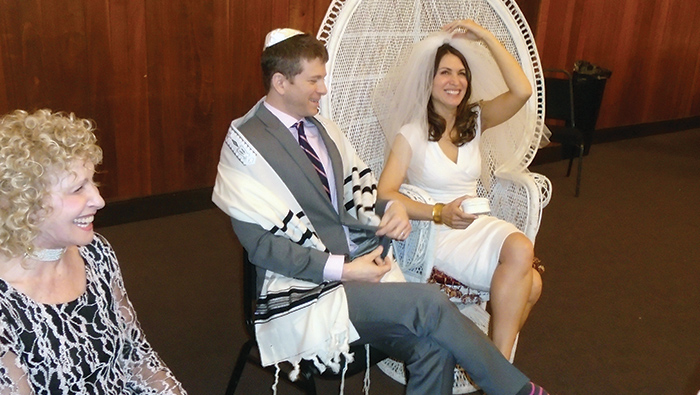 For nearly two decades, fifth graders at Congregation Neveh Shalom have had front row seats for a full Jewish wedding ceremony as part of their life cycle class. Each year a Neveh Shalom couple has volunteered to recreate a full wedding so the students can participate in the day, from the signing of the ketubah to the reception honoring the couple with songs, dancing and refreshments.

The photographs on these pages show the key elements of a Jewish wedding with explanations condensed from the class curriculum. Most of the photos are also from these Neveh Shalom wedding re-creations.

The three essential elements of a wedding are the signing of the ketubah, the giving of the ring(s) and the yichud (seclusion). Under the chuppah two ceremonies take place: Erusin (betrothal), also known as Kiddushin (sanctification), and Nissuin (the nuptials).

Usually separate receptions are held for the bride and groom as the guests arrive at the ceremony site. The bride is seated in a throne-like chair where friends and relatives may greet her. Meanwhile, at the groom’s reception, the guests listen to a d’var Torah by the groom, who is often interrupted by songs or jokes.

The ketubah, written in Aramaic, is the Jewish legal contract that states the rights, provisions and conditions of the marriage partnership. The contract becomes the bride’s property.

3.  Bedeken – Veiling of the Bride

During the ceremony the bride wears a veil. The groom approaches the bride, looks into her eyes and lowers the veil. By doing so he makes sure that he has the right bride, unlike Jacob, who married Leah first instead of Rachel.

The wedding canopy is a multifaceted symbol: it is a home, a garment and a reminder of the tents of nomadic ancestors. Stepping under the chuppah, the bride and groom enter their new home, established in the presence of God.

Before the bride takes her position next to the groom, she may circle him either three or seven times. This ancient custom symbolizes the couple making an invisible wall of protection around themselves.

The rabbi recites the blessing over the wine and then the betrothal blessing, Birkat Erusin. Drinking from the same glass indicates that the bride and groom are ready to begin a life of sharing.

The giving of the ring is the central legal element of the betrothal ceremony. In the presence of the witnesses, the groom recites the Harei At, the public proclamation of this union. Tradition stipulates that the rings be simple, unbroken bands without precious stones, symbolizing that rich and poor are alike in love and marriage. The rings are placed on each other’s right index finger, making it easy for witnesses to see this legal aspect of the ceremony.

The bride’s acceptance of her ring marks the end of the betrothal ceremony. At this natural break between Kiddushin and Nissuin, the ketubah is read aloud and then given to the bride to keep.

Each blessing has its own significance: the first is for the wine; the second is in honor of the wedding guests; the third celebrates the creation of humankind; the fourth, fifth and sixth bless the couple’s marriage; finally, the seventh is in honor of Israel and the wedding couple. These blessings are recited over the second cup of wine, after which both groom and bride drink.

The groom breaks a glass placed under his foot at the end of the ceremony. The most well-known interpretation is that it represents the destruction of the Temple. This reminds us that even at times of greatest joy and happiness, we should not forget the suffering of our people – past and present. At the sound of the broken glass, family and guests call out words of congratulations and “Mazal Tov” (good luck).

This is the formal seclusion of the bride and groom. A few moments of quiet time are spent together as they break bread as husband and wife.

Upon the couple’s return from yichud, family and friends join together in dance, songs and a festive meal.