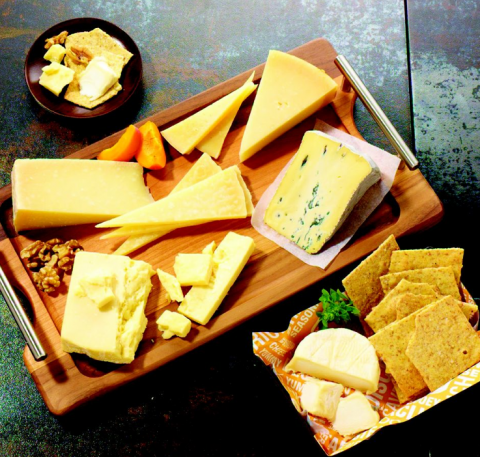 Portland’s cheese scene recently got a lot more sophisticated with the addition of three Murray’s Cheese mini-stores. These satellite shops, which are the first to open west of the Mississippi, are located inside selected Fred Meyer supermarkets. The first Murray’s Cheese shop in Oregon opened at the Burlingame Fred Meyer in May of 2012 and is now also at the Hollywood and Hawthorne Fred Meyers.

For those who might be unfamiliar with Murray’s Cheese, it is New York City’s oldest, and arguably most famous, cheese shop. Founded in 1940 by Jewish businessman Murray Greenberg, the store was originally a small establishment that served the local Italian community in Greenwich Village. In 1991 Jewish entrepreneur Robert Kaufelt bought the store and greatly expanded its offerings. Today, Murray’s Cheese sells more than 175 different kinds of cheese as well as accompaniments like nuts, crackers, dried fruit and olives. The business, which has now partnered with grocery giant Kroger, is fulfilling its mission of bringing the best cheese selection to America. In keeping with the spirit of mitzvah, Murray’s Cheese continues to donate to charitable organizations that enrich the health, social, educational and cultural life of the country.

New visitors to Murray’s Cheese need not be overwhelmed by the colossal array of washed-rind, cave-aged, blue-veined and soft-ripened cheese. They can start out with tried-and-true favorites like cheddar. Murray’s Cheese offers traditional Irish and English cheddars as well as a special-edition clothbound Cabot version made from a single varietal of Vermont cows.

Lovers of the local will want to sample the increasingly well-known Rogue River Blue, which is wrapped in grape leaves and then soaked in pear eau de vie from a neighboring vineyard. Rogue River Blue is an ongoing favorite of the American Cheese Society, which has bestowed numerous awards upon the cheese. Other local favorites carried by Murray’s Cheese include Tumalo Farms’ Pondhopper and Cascadia Creamery’s Sleeping Beauty.

Those who keep kosher will be glad to know that Murray’s Cheese offers a wide variety of cheese made with rennet from non-animal sources. Cabot, in particular, is certified kosher.

Every Murray’s Cheese shop employs an expert cheese master who can answer any cheese-related question, including how to pair a specific cheese with wine. The store also aims to forge links between customers and producers with “Meet the Cheesemaker” events. Murray’s Cheese has plans to open three more Oregon locations this year.

Food and travel writer and jazz pianist Kerry Politzer is a transplant from New York who greatly enjoys the Portland food scene. She publishes a blog on the Portland-NYC culinary scene, The Rose and the Apple.