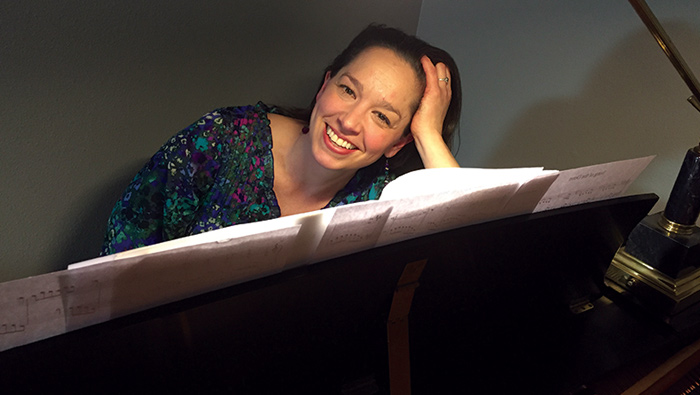 Sharon Fendrich is like so many moms: She, too, sings to herself while idling in the school pickup line. But unlike most moms, Fendrich – a professional musician and vocalist – is truly inspired.

She uses her precious few moments before welcoming her two children into her minivan to record a few bars into her phone to keep their memory and sound fresh. Talia, 11, is in fifth grade at The International School, and Max, 4, attends The Gan Preschool.

Fendrich, 40, also is productive in slumber. “I write (music) while I’m sleeping,” she says in an interview at home with her husband, Mark Epstein. “Only, it’s not so wonderful when it disappears when you awaken.”

Fortunately for her and her growing fan base, there’s plenty that remains, along with increasing inspiration – from Judaism and current events – from which to draw.

Released in November and available on iTunes, “Memory of a Bittersweet Love” is Fendrich’s first single, a pensive, mellifluous New Age instrumental heavy on lively piano. Her second, “Song of the Dove,” is due out this month. She hopes the third – and many successive pieces, comprising an entire album – will follow in a year’s time.

And soon she’ll be coming to a venue near you. Well … not likely.

Musically inclined since age 3, Fendrich’s piano teacher introduced her at age 15 to Chopin.

“It’s like the heavens opened up,” Fendrich says, sitting with Epstein on the couple’s couch in the first-floor room they’ve turned into a recording studio, complete with the Steinway baby grand piano she’s had since age 14 and an Alesis QuadraSynth8 keyboard.

“I wrote poetry and music,” as a child and teen, she continues. “And then my soul came out in the music. I suddenly had a venue for all emotions. … I grew up in a volatile environment, and I’d scrambled to find footing and safety.”

Music, which has no walls and endless opportunities for exploration, became – and remains – Fendrich’s ultimate safe place; much of her current work is improvisational, first written out by hand and transcribed later.

Fendrich’s relationship to and with music deepened in college. At Tufts University, from which she graduated in 1998, she was always part of the musicians’ community. But she maintained a unique position in it.

“All of my associates in college were in performance groups,” she says.

She instead spent time outside her international relations and ethnomusicology classes studying composition, orchestration and conducting. She once conducted the fourth movement of Mozart’s “Requiem” with a full chorus and co-scored an entire film.

“There’s a belief that you have to perform in order to make it,” she says. “And I don’t believe in that. It’s not about me, the performer. It’s about the music.”

The Fendrich-Epstein family permanently settled in Portland in 2014, and they are active at Congregation Neveh Shalom, where Talia, a fifth-grader, soon will begin preparing for her bat mitzvah.

Fendrich decided to brush up on her leyning (Torah chanting) skills, and, last summer, she took to learning her daughter’s forthcoming Haftarah.

Neveh Shalom Cantor Deborah Bletstein says, “Sharon is a naturally gifted singer who transmits the chanted Hebrew texts of Torah and Haftarah beautifully. She overwhelmed the congregation with her gorgeous chanting of the Haftarah on the first day of Rosh Hashanah this past fall.”

Fendrich prepared for two months solid for the new challenge and remembers that after chanting the New Year Haftarah, “Dr. (Victor) Menashe had tears in his eyes and didn’t have the words to thank me. And that’s what I want: people to enjoy the music when it’s personal, private, enjoyable.”

She continues: “When I’m up there (on the bimah) I feel spiritually moved. What I wanted to gift my congregation is the connection that I feel with my heritage,” she says, referencing the emotional legacy of her maternal grandmother, whom she describes as her “best friend” and “rock.” Her grandmother escaped Germany in 1936 and died only four years ago.

Sharon says, “I am someone who, to a fault, leads from my heart and my connection to my ancestors.

“To me, music is music no matter where you are. And human emotion is at its rawest either in a sanctuary or in a room by yourself,” she says, adding rhetorically, “How do you get human emotions into music?”

When not in the school pickup lines or grasping at elusive tunes from dreams, Sharon is infusing notes with what flows from her heart and gut.

Sharon says that “Memory of a Bittersweet Love,” produced by Dreamland Productions, captures in sound the feeling of “anyone who’s been in love and lost it and must reconcile their profound joy and carefree happiness” with loss.

“(I) was moved when I listened to her new musical composition,” Neveh Shalom’s Senior Rabbi David Kosak says of the single. “Sharon is a person of some spiritual depth, and the clarity of her vocal talent seems an honest expression of who she is as a person, as well.”

Writes Stephen Hill, an esteemed producer of New Age music, of “Memory of a Bittersweet Love”: “(the) … composition, performance, production are all quite competitive with other New Age piano artists.”

With Enya (who rarely performs and relies heavily on instrumentals) and Chopin as Sharon’s musical muses, she sneaks in about 10 hours a week for her creative craft.

The rest is consumed with mothering her children and assisting Epstein, 49, with his job search as a software engineer and IT director. She also is on the steering committee of Chevra Kavod Hamet (Jewish burial society serving the non-Orthodox community), and she shares her talents with her late grandmother’s contemporaries, singing Monday afternoons in the Rose Schnitzer Manor Chorus.

Sharon says some RSM residents have a “mopey” demeanor when they first sit to listen to the chorus. Epstein jumps in, saying that after they experience the music, “They leave with a spring in their step.”

“Every step I take, I feel my heritage on me and in me. Eventually, Jewish music will come out of (all my experiences),” says Sharon. “I give color and sound to human emotion.”

Sharon Fendrich’s music can be heard, enjoyed, downloaded and purchased at dreamlandproductions.com/music.