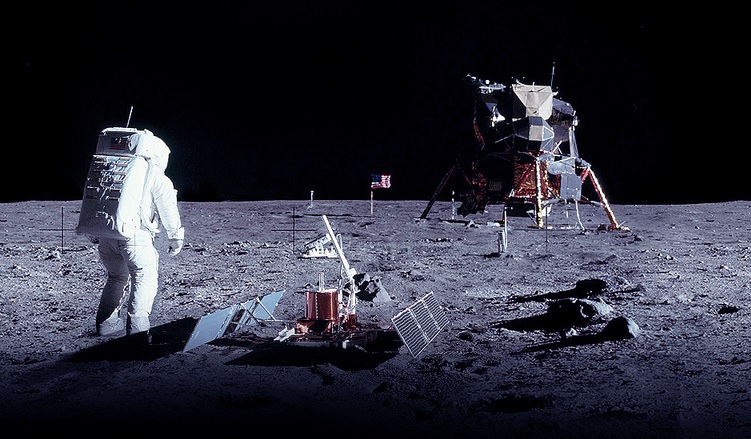 Photo: Astronaut Buzz Aldrin next to the Passive Seismic Experiment Package with Eagle in the background. Photo by Neil Armstrong/NASA/Creative Commons

The Apollo 11 space mission, during which humankind took its first steps on the moon, was so momentous we hardly need an excuse to celebrate it. We do so this year to mark the half-century since Neil Armstrong stepped on the moon’s surface, of course, but the particular significance to a 50th anniversary goes well beyond marking our calendars. The biblical idea of a jubilee, to be celebrated after seven cycles of seven years have passed, is an ancient one that renews the relationships between the sacred, infinite value of every human being, the interconnectedness of society and the abundant gifts of the earth.

The Book of Leviticus instructs us to celebrate a jubilee as a season of liberation. All debts are cancelled, and all slaves go free. The flaws and limitations of human beings — our greed, our desire for money, power and status and our willingness to sacrifice the well-being of others for our own gain are, all at once, put aside in the 50th year.

“You will make the 50th year a sacred celebration and proclaim liberty throughout the land and all its inhabitants, everyone will receive back their original property and the enslaved will go home to their families.”

The ideas of equality and freedom described in this passage are so central to the founding ideals of the United States that this passage is inscribed on the Liberty Bell. Because of its association with freedom, that which we most crave, the word jubilee came to be associated with the hyper-superlative word, “jubilation” or intense joy.

The tech age that seemed to dawn that day 50 years ago has indeed been one of superlatives and hyper-superlatives. Since Apollo 11 landed on the moon, technology has been portrayed as a force that would make us happier, more prosperous and more free. Technology would make the impossible possible. From every new bold destination reached, we could strive yet again.

Technology is an audacious expression of human hope and our striving to attain the fullest yield of human creativity. The look of wonder on the faces of regular people watching the Apollo 11 spacecraft take off captures a timeless and sacred experience. What makes the recently released Apollo 11 movie so spectacular is the emotional experience of people watching the mission — from the NASA team in Houston to the Americans camped out in the parking lot of a J.C. Penney department store.

The space program, paid for by every American taxpayer and advanced by the dreams of individual visionaries and entrepreneurs, used technology to advance the cause of the human race. We should hold our technology today up to the test of whether it inspires society toward wonder, hope and courage or increases fear and insecurity about our shared future.

Life-enhancing, humane, aspirational technology transcends party and ideology. When a Republican president greeted the astronauts whose mission into space was launched by a Democratic predecessor, all of humankind were the beneficiaries of those shared policies and investments.

Because human hunger for technology is immense, it has an almost boundless potential to solve big problems and to offer great promise. But the jubilee’s ancient dictum to set people free from debt and enslavement reminds us that the hunger for technology, or any human hunger, ought not make some of us manor lords to whom others are held in service. The technology that humans cultivate should continue to create a better life and more prosperity for all.

Many Americans now live in part as avatars composed of the data created by our choices and our decisions online. We need to examine the relationship of those online identities to our sovereign identities and our personhood and make sure that people are not made to feel or to be less sovereign or less safe by engaging, whether voluntarily and intentionally or incidentally and of necessity, in the cyberworld.

Finally, we must be guided by Neil Armstrong’s prescient and perfect articulation as he stepped onto the moon’s surface. Whereas he was supposed to say, “one small step for a man, one giant leap for mankind,” he spoke both clauses in the universal, saying instead, “one small step for man, one giant leap for mankind.” Armstrong later suggested that the static in the audio transmission had obscured the singular article “a.”

Whether Armstrong spoke these words in the plural because it intuitively felt right, or whether humankind heard them that way when broadcast across the infinite vastness of space, Armstrong said it perfectly. No one person, but only all of us together, can take such an important positive step forward as when he stepped onto the moon. There are no singular parts of speech in the cosmos. Technology belongs to all of us.

Julie Schonfeld is the former chief executive officer of the Jewish Conservative denomination’s Rabbinical Assembly and is now managing director of Leading Ethics, which helps organizations build an ethical culture.