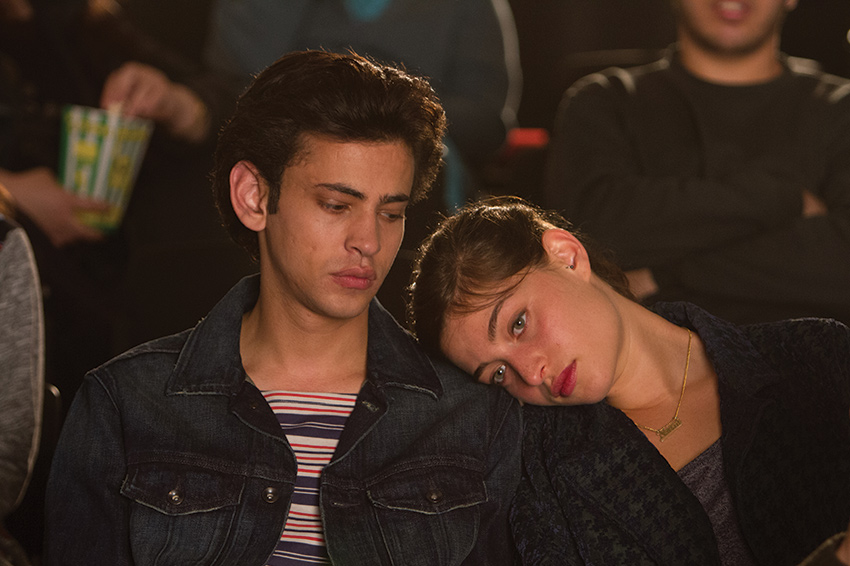 Exceptionally intelligent and resourceful, and supported by a loving middle-class family, the young protagonist of “A Borrowed Identity” has a wide-open future.

He does have one handicap, though, that will block his ascent into the upper echelons of

The film will come as something of a revelation to American audiences who’ve never been exposed to the Arab Israeli perspective, at least as it’s manifested in everyday dreams and aspirations. At the same time, the central character’s innate morality and unfailing decency make “A Borrowed Identity” anything but an uncomfortable experience for Jewish viewers.

The movie begins in the town of Tira in 1982, and devotes its first half-hour to Eyad’s childhood and family life. The boy adores his grandmother, excels at math and logic, and takes pride in his father’s unspoken yet radical past (which was more vocal than militant, but got him a prison sentence nonetheless).

“A Borrowed Identity” patiently inculcates us into Eyad’s demonstrative family, an otherwise easygoing clan who root impotently for the Arab side in every regional conflagration from the Israeli invasion of Lebanon to the U.S. invasion of Iraq.

When Eyad (played by Tawfeek Barhom) is accepted to the Jerusalem Arts and Science Academy, an exclusive boarding school populated almost entirely by Ashkenazi Jews, his parents kvell at the great opportunity he’s been given. It doesn’t take Eyad long, however, to figure out that being a minority among entitled high school students is a particular challenge.

But he’s good at sloughing off the daily racism – casual, intentional and institutional       – and making friends, so Eyad thrives. He bonds with an Israeli his own age with muscular dystrophy, who he’s been assigned to visit as part of a community-service project, and has a Jewish girlfriend by his junior year.

It’s all perfectly natural and conveys the fundamental truth that we like who we like and we love who we love, regardless of their identity or background. It can only happen, though, once we know the other person as an individual. To a teacher on the first day of class, or a soldier on the street who overhears Arabic spoken or a café owner ostensibly in need of a waiter, Eyad is nothing more or less than an Arab.

The film conveys Eyad’s growing awareness that he’s in a bind between his parents’ expectations (he could be a doctor) and the array of limitations (romantic and occupational, for starters) that Israeli society imposes on Arabs.

Longtime fans of Eran Riklis (“Cup Final,” “The Syrian Bride,” “Lemon Tree”) will not be surprised to hear that one of the strengths of “A Borrowed Identity” is its heartfelt humanism. Despite the continued disintegration of Israeli-Palestinian relations, the director’s faith that people of good will can transcend fear, stereotypes and peer pressure has not faded.

Riklis’ optimism is tempered by the real-life experience of Sayed Kashua, an acclaimed novelist, Haaretz columnist and creator of the popular sitcom “Arab Labor.” For all his success, Kashua is acutely aware of being seen as an outsider in Israeli society.

The film was originally called “Dancing Arabs,” after Kashua’s first book, presumably a barbed reference to the CNN video of Palestinians celebrating the 9/11 attack. The title also alludes to the struggles of Palestinians – exemplified by Eyad – to create their own identity and fulfill their promise.

Without naiveté or cynicism, “A Borrowed Identity” invites us to identify with one talented young man who asks what each of us asks – to be seen, judged, loved and rewarded for who we are. It’s a deeply rewarding film, and an important one.

Michael Fox is a San Francisco-based film critic and journalist.