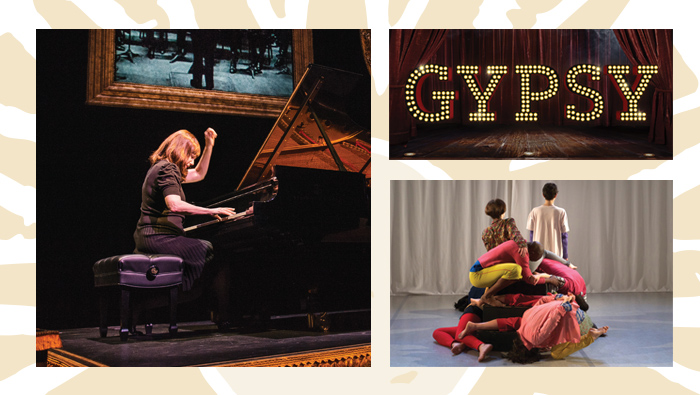 Grammy-nominated artist Mona Golabek returns to Portland Center Stage at The Armory for a limited engagement of “The Pianist of Willesden Lane,” adapted and directed by Hershey Felder and based on the book The Children of Willesden Lane: Beyond the Kindertransport; A Memoir of Music, Love, and Survival by Mona Golabek and Lee Cohen. The surprisingly uplifting true story of a young musician separated from her family when she was sent to England on the Kindertransport enjoyed a sell-out run at The Armory in 2016. The return engagement opens on June 17 and runs through June 30 on the U.S. Bank Main Stage. Tickets are available at pcs.org, 503-445-3700, or in-person from the box office 128 NW 11th Ave., Portland.

Based on the 1957 memoirs of world-famous striptease artist Gypsy Rose Lee, “Gypsy” begins at the end of the vaudeville era as overbearing stage mother Rose carts young daughters June and Louise (the young Lee) throughout the country, performing in fading venues for dwindling audiences. Rose’s desperate desire for fame soon pushes the family to its limits, unraveling relationships, unveiling a new star, and revealing the raw power of ambition laid bare. With six Broadway productions and two film adaptations, Gypsy has transfixed and astounded audiences for generations, holding its place among the greatest of all American musicals. Broadway Rose summer performances are at Deb Fennell Auditorium,

The 2017 Risk/Reward Festival
features new work by six indie performing artists from across the Northwest June 23-25 at Artists Rep: