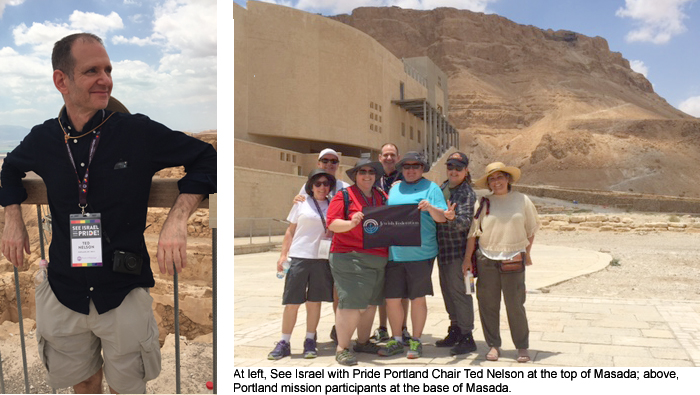 Jewish members of the LGBTQ community from across the United States embarked on the groundbreaking “See Israel with Pride” mission May 26. The trip has been organized and led by the Jewish Federations of North America in partnership with A Wider Bridge, to experience Israeli culture, politics and character through a LGBTQ lens.

The Jewish Federation of Greater Portland organized a Portland delegation with Ted Nelson chairing the Portland Organizing Committee. Of the nearly 100 mission participants from around the country, Portland’s delegation of seven was a substantial part of the group.

Portland delegates have been submitting blog posts about their experiences, all of which can be found at this link.

On June 1, the Portland delegation made a special site visit to the Tel Aviv LGBT Youth Center to learn about the incredible work of Israel Gay Youth.  Supported by funds from the JFGP’s Overseas Special Projects Committee over a number of years, IGY is currently the only  organization in Israel dedicated to serving all LGBT youth. IGY’s goal is empowering LGBT youth within the formal and informal education systems, creating a meaningful social youth leadership and help them design a better community and eventually a better Israeli society.  This was an incredible way to see, first hand, how our Portland Jewish community is impacting lives in Israel every day.

The mission, the largest ever of its kind, met with top Israeli figures across many fields – including Israeli President Reuven Rivlin, U.S. Ambassador to Israel Daniel Shapiro, and innovators and leaders in the business and arts communities.

On May 31 President Rivlin welcomed the U.S. delegation. The group were briefed by senior advisors to the President on the work of the President and the President’s Office, and in particular about the flagship ‘Israeli Hope’ initiative which through a range of projects and programs was aimed at building a shared future for the different communities in Israel, described by the President as the ‘Four Tribes’ in his speech to the Herzilya Conference in 2015.

The President concluded, “I hope that this visit will help you look beyond the headlines and see that, despite the challenges, Israel is still a beacon of democracy and equality in the Middle East, and the world.”

The delegation also visited Yad Vashem for a Holocaust program focusing on the persecution of LGBTQ individuals under the Third Reich. The mission will end with beginning of the Tel Aviv Pride Parade.