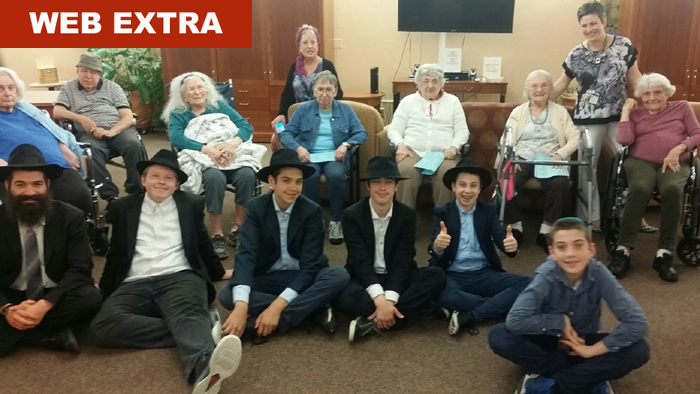 PHOTO: Throughout the school year, five students have visited seniors at Cedar Sinai Park in Portland each week as part of a program called “Torah & Us.” From left, bottom row, are: Rabbi Shneur Wilhelm, principal of Maimonides Jewish Day School and the boys’ teacher; Noach Both, Menachem Wilhelm, Ari Becker, Mendel Greenberg and Shmuel Dovid Mishulovin. The program will continue in the fall with the oldest class at Maimonides Jewish Day School. The current participants graduated on June 15.

Some bar mitzvah-age boys in the U.S. Pacific Northwest who will head off to yeshivah and high schools this fall will take with them many experiences and fond memories from their current academic year. One of them is sure to be their weekly trips to Cedar Sinai Park, a senior-citizen housing campus in Portland, Ore.

Five teens started visiting residents there in October, leading sessions related to the weekly Torah portion. The program evolved into its current format, “Torah & Us,” over the course of several months. Now it includes a PowerPoint presentation, a question of the week and a lively discussion with those at the assisted-living facility. The young men also present a modified program once a month for the campus’s nursing home.

“We wanted to teach about working with other people and recognizing everyone’s strengths, especially the elders, who have so much to give,” says Rabbi Shneur Wilhelm, the boys’ teacher and the principal of Maimonides Jewish Day School, which is under the auspices of Chabad of Oregon.

Mendel Greenberg, 13, says his favorite week was when they tackled the topic of modesty. The conversation drew a large crowd, he relates; people came with a “whole bunch of views” on the appropriate way to dress. “It made the whole day, the whole thing worthwhile,” he says.

Attendance has been on the rise since the introduction of “Torah & Us,” affirms Jemi Kostiner Mansfield, director of spiritual life of Cedar Sinai Park. She also helps coordinate the visits.

“The residents regularly comment on what a joy it is to see young people actively sharing their love of Judaism and learning. The singing, especially, brings smiles to most faces, as does the enthusiasm,” she says. “There have been very thoughtful conversations about the question of the week and some discussions that veer far off the intended path, challenging the students to think beyond the limits of their current learning.”

On a personal level, she says, she enjoys the opportunity to interact with the students and has relished watching them grow into their roles as confident presenters and discussion moderators. “It doesn’t hurt that I’ve raised two boys,” she adds, “and so I look on this group with more than a drop of motherly pride at their progress.”

Preparing is hard work, but it’s worth it, says 13-year-old Ari Becker. The boys develop their PowerPoint presentations and choose stories ahead of time. “It’s fun, and it’s an opportunity for us to learn about and interact with the older generation.”

Becker says that in addition to improving his public speaking and getting the chance to do community service, he’s been impressed by how open everyone has been to sharing their opinions. “I really like the conversations we have. I like the variety and hearing other people’s perspectives.”

‘How to Be Better Mensches’

Devorah Both, whose 14-year-old son Noach takes part in the program, drives the group to the senior center and likes to stay for the program. “One of the most important things to me is the response from the seniors: They tell the kids to ‘speak louder, speak slowly.’ It’s really fun to watch them respond to the kids, to teach them how to be better mensches,” she says.

With the fellows off to different yeshivahs and high schools in the fall, Kostiner Mansfield hopes that they’ll take with them the experiences they have created over the past year and the relationships they have built. She also looks forward to a new contingent of students from the school coming to visit. “I’d love to see ‘Torah & Us’ continue to grow and thrive, strengthening the connection between the elders at Cedar Sinai Park with the rest of the Portland Jewish community.”

The rabbi confirms that the program will continue in the fall with the oldest class. As for the current crop of boys, they graduated on June 15.

Wilhelm says as these students look to the future, “I hope they remember the power and importance of every individual, and the ability each of us has to make a positive imprint and difference in other people’s lives.”

Reprinted with permission from Chabad.org.