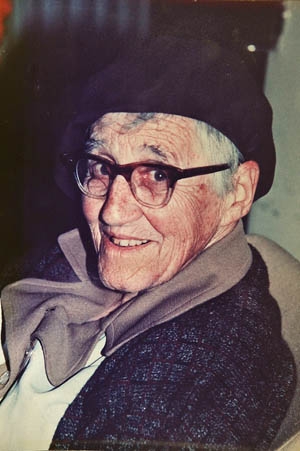 That is the inscription on the tombstone of Nehama Leibowitz, a master Torah scholar and teacher. Nehama, as she was commonly referred to, was born in Riga, Latvia, in 1905 to Orthodox/Zionist parents who spoke Hebrew to their children. Learning was extremely important in the Leibowitz family, and private tutors were hired to provide both Nehama and her older brother, Yeshayahu, with a well-rounded Jewish and secular education.

Following the Russian Revolution in 1917 the family moved to Germany. There Nehama studied first in Berlin and then at the University of Marburg where, in 1930, she earned a doctorate in Biblical Studies. Shortly thereafter Nehama immigrated with her husband – an uncle of hers several years her senior – to then Palestine where she began teaching Bible at the Mizrahi teacher training seminary for women. In the 1950s she was invited to teach at Tel-Aviv University and then at the Hebrew University, in Yeshivot (Talmudic academies), in kibbutzim, on army bases and in many other institutions. She rarely turned down an invitation to speak but only in Israel. She refused to travel abroad.

In addition to these engagements, Nehama held weekly classes in her private apartment until shortly before her death. Another Nehama – Rabbi Joshua and Goldie Stampfer’s daughter – was privileged to study with her namesake at her home; she describes her teacher as someone who “holds your attention with the power of a master teacher who seeks to draw out of her students insights that they themselves had no idea they possessed.” Nehama Leibowitz’s methodology was very traditional: She rarely provided her own interpretation and she relied on commentators – ancient, medieval and modern. Yet she was innovative at the same time. Instead of learning what each commentator had to say about a certain verse, Nehama would start her lesson by asking what would become her leitmotif: “What preoccupies Rashi?” She wanted her students to understand what, in the Torah text, led Rashi and other commentators to offer a specific interpretation. She also insisted that her students argue in favor of one or another commentator. Nehama taught her students how to think.

Another of Nehama’s long-time students, Avigdor Boncheck, a clinical psychologist, further explains her methodology: “Most teachers teach knowledge, while Nehama teaches understanding… . Knowledge is the acquisition of information; understanding is a way of thinking about information … (it) is a tool for further understanding … (and it) requires thinking.”

Her love of the Hebrew Bible inspired and infected everyone around her. In 1941 following a six-month seminar in Jerusalem for women members of various kibbutzim, Nehama’s students wanted to continue studying text, but how could they do so without a teacher? In response Nehama came up with the idea of the gilyonot/worksheets. She would send her students every week a section from the Torah portion and include questions based on the passage and on commentators’ interpretations. The students would send their answers to Nehama, and she in turn would make corrections and add comments. It is worth keeping in mind that these were pre-Internet and pre-Xerox times. The gilyonot/worksheets were mimeographed and mailed via postal services every week by Nehama. This project was to last for 30 years, from 1942 until 1971, when she wrote a public letter of farewell to let her subscribers know that the gilyonot project had come to an end. Following is a short excerpt: “I am enthralled by this vast army of old and young, mothers and girls, teachers male and female, clerks and laborers, veterans and newcomers of all communities, hundreds of thousands (literally!) studying Torah for its own sake. For our joint studies involved no certificates, examinations, grades, prizes; no credits, scholarships, income-tax rebates but simply the joy so deep of the one who studies Torah.”

The gilyonot were later compiled, published in book form and translated into several languages. While Nehama was among the first woman Torah scholars in Israel, revered and respected by rabbis and even invited to teach in all boys’ Zionist Yeshivot/Talmudic academies, she did not consider herself a feminist, nor was she perceived as such by others. She did not seek to bring about changes for women in the synagogue. Yet Uriel Simon, Bible professor at Bar- Ilan University, sees Nehama as an important link leading to Orthodox feminism.

Sylvia Frankel is an adjunct faculty member of the Religious Studies Department at Lewis & Clark College. Frankel is also on the faculty of the local Florence Melton School of Adult Jewish Learning and has taught classes on Jewish history, the Holocaust and Israeli literature at Portland State University, Reed College and Marylhurst.