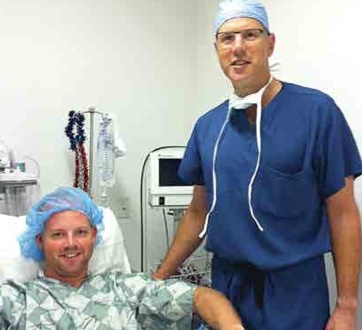 The son of surgeon and World War II veteran Zanly Edelson, z”l, Dr. Richard Edelson grew up with a strong respect for the veterans who sacrifice so much to allow Americans to thrive. Zanly Edelson was a general surgeon on a military base in England and was injured in a glider crash during the invasion of Holland. After the war, Dr. Zanly Edelson returned to Portland and he and his wife, Barbara “Bunny” Edelson, joined Congregation Beth Israel, where Richard attended religious school and became a bar mitzvah.
“He didn’t talk about it (wartime) much, but I’ve read an incredible amount and have tremendous respect for all the veterans and that entire generation,” says Dr. Richard Edelson. Now the sports medicine physician and board-certified orthopedic surgeon has founded a program that uses his expertise to repay veterans who continue to sacrifice for their country.

The Oregon Outpatient Surgery Center, where he is on the medical staff, has launched a program for veterans in need of surgery. Under this new program, dubbed Save Our Veterans: Surgery Center Assistance for Veterans, the OOSC will donate one day a quarter to provide outpatient surgical care for local veterans who meet basic qualifications. All follow-up care, including physical therapy, and necessary supplies are supplied for free by the OOSC’s staff and vendors.

“Veterans get high-quality care there (Veteran’s Administration medical centers),” says Dr. Edelson. “It’s a problem of access and volume, not quality.” He adds that in the late 1980s when he was in his training, the VA was already struggling to meet the medical needs of veterans in a timely manner. With the number of veterans rising dramatically in the past decade, Dr. Edelson says the Dr. Richard Edelson with Justin Thomas on the day of his free surgery in the Save Our Veterans program. Thomas injured his knee serving in Afghanistan with the Oregon Army National Guard. Justin Thomas does his free rehab as part of the SOV program.
system is being stressed even further. He wants to help alleviate that stress.

A press release announcing the program noted that according to 2011 statistics from the VA, it had already treated 396,552 Iraq and Afghanistan war vets for musculoskeletal complaints. In fact, joint pain (pain in the neck, back, hips and knees from carrying heavy packs and jumping in and out of high vehicles all day) is the main medical complaint of 30.5% of all returning warriors, making them strong candidates for the types of surgeries that high-quality outpatient surgery centers offer. “It is in our expertise,” Dr. Edelson explains. “We have the professional expertise and the facility expertise with outpatient surgery. We can provide extremely high-quality care.

“In the short term, we can help local vets on the wait list with their needs. We feel compelled morally and ethically to help,” he says. “We can serve as a model for government and private partnerships to allow the system to be decompressed. … For now we will do our part as charity to help individuals.”
In the long term Dr. Edelson hopes the model he has created will provide the opportunity for surgery centers to help The Edelson family from left: Brooke, Lauren, Rich, Jill and Brendan. the VA to “decompress by offloading (some cases) to private centers.”

“We would like to provide a model and inspiration of other like-minded surgery centers to do their part and solve the backlog for more veterans,” he adds.
OOSC Executive Director Jesseye Arrambide, who volunteers to administer SOV, says that several surgical centers around the country have contacted her for information and advice on setting up similar programs. Dr. Edelson is the chief medical officer and head team physician for the Portland Timbers professional soccer team and orthopedic consultant for the Portland Thorn; he also provides orthopedic support for Nike and area high schools.

Asked if he sees a similarity between veterans’ injuries and sports injuries, Dr. Edelson says, “Military service is a contact sport. They are exposed to significant physical harm whether in training or wartime.” The concept for treatment is also the same: “We try and get someone back to whatever level of activity they had been at and would like to be at again.” Working with local veterans groups, the OOSC seeks eligible veterans who need surgeries that can be performed in an outpatient surgical center. “Our priorities will be vets who were injured as a consequence of military duty, and especially those on waiting lists, but others will be considered,” says Dr. Edelson. To date, three veterans have participated in SOV.

Evan Johnson, 32, from Tigard, fought in Iraq in 2004 as an infantryman. He was the first recipient. Johnson was on a long wait list to receive ankle surgery at the VA. His wife saw news coverage on the Save Our Veterans program and called the surgery center. “It’s hard to believe that this is all for free. I’m very happy to be part of the program,” he says. Robert Gustafson, 63, is a Beaverton resident and Vietnam vet who served in 1971-72. He received complimentary surgery and aftercare to repair damaged tendons in three of four tendons in his right shoulder rotator cuff injured in a fall about a year ago.

“The surgery program is terrific. Veterans need more resources. If the Veterans Administration is overwhelmed, it’s great that there are other places stepping up and helping out. I was thrilled to have the surgery and the top-notch quality of care provided,” he says. His wife, Stephanie, calls the surgery through Save Our Veterans “a blessing.”

Salem resident Justin Thomas, 34, is in the Oregon Army National Guard and served in Afghanistan. In July he had an anterior cruciate ligament (ACL) repair on his knee. Thomas’s original injury to his knee occurred when he was serving in Afghanistan in 2002-2003:

“We were on a mission in Afghanistan, and I was running and stepped between two boulders where a helicopter landed and dislocated my kneecap, which led to other issues,” he explains. “I had problems ever since. Had surgery for my kneecap in 2005, but it didn’t take. Then I tore the ACL skiing in 2010. And that surgery didn’t take.”

“I’m in physical therapy now for 1 to 1.5 hours twice a week. After just three weeks, the knee was more stable. Recovery is not a short process. It could take six months to a year for total recovery. I’m just very grateful for the program and Dr. Edelson. … I heard that Dr. Edelson is one of the best surgeons in the area.”
There’s plenty of evidence to back that up. The Oregon Ambulatory Surgery Association has named him Medical Leader of the Year twice – in 2010 and 2014. He was recently selected as a candidate for MEDPAC (the Medicare Payment Advisory Commission), an independent Congressional agency established to advise Congress on issues affecting the Medicare program. MEDPAC is also tasked with analyzing access to care, quality of care and other issues affecting Medicare.
The phrase Dr. Edelson feels best sums up the motivation for the program is this: “We ask a lot of those who serve, and we should serve those we have asked.”
Besides, Dr. Edelson says, “It’s very satisfying to be able to help somebody.”

Dr. Edelson and his wife, Jill, the daughter of Leonard, z”l, and Lois Schnitzer both grew up at Congregation Beth Israel. But since Jill was a few years younger, they didn’t meet until a blind date his last year of medical school. He calls the program “a natural extension of the cultural and religious nature of our background.”
He adds that he hopes they have passed on those ethical precepts to their three children: Lauren, 22; Brooke, 20, and Brendan, 17, all of whom served on the
Oregon Jewish Community Youth Foundation (Brandon is in his last year on the board).

“Over the years, I have seen Lauren, Brooke and Brendan all participate with enthusiasm, knowledge and commitment as young Jewish leaders in OJCYF,” says OJCF Executive Director and OJCYF Advisor Julie Diamond. “They are forthright in expressing their opinions on fundraising, community nonprofits and grant-making.” So it seems like the Edelsons have indeed succeeded in teaching their children the value of philanthropy and giving back.