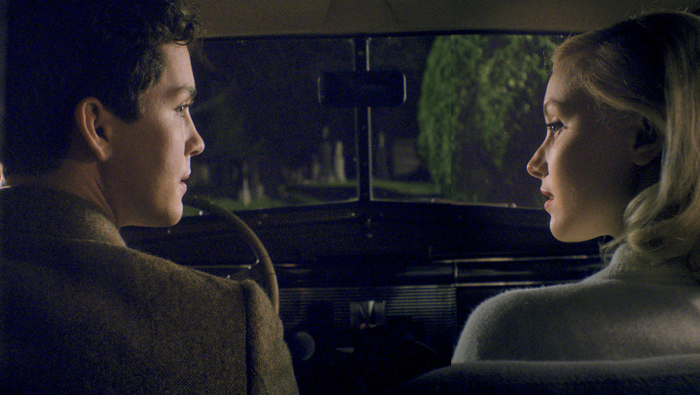 For his directorial debut, veteran producer and writer James Schamus chose a Philip Roth novel set during a turning point in the Jewish-American experience.

“Indignation” unfolds in 1951, when opportunities and prospects for young Jewish professionals were just beginning to expand.

“You discover when you start to inhabit that world that there was a genuine sense of optimism, a genuine belief that belonging in this country was possible and real and happening,” Schamus, 57, says. “And on the other hand, you have all the traumas associated with the experiences of extended families in the Holocaust disappearing, and a political culture in this country that was bizarrely – especially if you’re of my age, and you didn’t experience it but you realize that your parents did – about as openly anti-Semitic as you can imagine.”

Schamus cites the covenants for real estate developments that excluded Jews, and the quotas for Jewish students at Ivy League universities. So Marcus Messner, the protagonist of Schamus’ insightful and moving film adaptation of Roth’s 2008 autobiographical novel, is fortunate to receive a scholarship from a small college in Ohio. He has to travel some distance from his New Jersey home, but not as far as the young Americans fighting in Korea.

A model student, Marcus (Logan Lerman) believes that college—and the world—is a meritocracy, and his brains and hard work will push him forward. His parents worry that he has little margin for error, and dread any disruption—such as Marcus’ involvement with an alluring blonde named Olivia Hutton (Sarah Gavon).

“One of the great crises as articulated by the characters in the book is, ‘Oh Lord, my son is dating a shiksa,’” Schamus says with a smile in an April interview before he showed his film at the San Francisco International Film Festival. “The kind of psychic and carnal energy created by that dynamic drives a lot of Roth but really a lot of the work of most major Jewish-American male artists of mid-century America. It’s a bit of a trope.”

But Schamus, who does inordinate research for all his screenplays, found much more to plumb in “Indignation.” He realized that the author subtly drew Olivia as a parallel to Roth’s contemporary, Sylvia Plath.

‘One of the things that drew me was a spark of recognition that in this late novel Roth is going back to a much earlier time than he often [does], that he’s connecting with a generation that we often don’t realize that he’s part of,” Schamus says. “While Roth is growing up in very, very Jewish Newark, New Jersey, up the road a few towns is Allen Ginsberg, who’s a few years older. In fact, Ginsberg’s aunt was Roth’s English high school teacher.

“So Indignation, to me, is more than a tip of the hat to ‘I saw the best minds of my generation dot dot dot.’ It’s the same subject. These were those best minds who were destroyed by precisely the system that Roth rails against in the book.”

Schamus, who grew up Jewish in Los Angeles and has lived and worked in New York for many years, wrote and produced most of Ang Lee’s films from “Pushing Hands” through “Taking Woodstock.” He also headed Focus Features for many years, earning a reputation as a staunch and astute supporter of independent filmmakers. (He financed and distributed the Coen Brothers’ “A Serious Man,” among other titles.)

Well-versed in the etiquette of adaptation, Schamus reached out to Roth as “Indignation” was about to go into production.

“You don’t adapt one of the world’s greatest writers and not get a little nervous,” Schamus says. “I grit my teeth and sent him the script before we started shooting, which was scary because if he’d had a violently negative reaction it would have put me in the pickle of probably not making the movie, to be honest. Philip did me one of the greatest favors anybody’s ever done a filmmaker, and that is he refused to read it.”

For his next trick, Schamus tackled Reza Aslan’s “Zealot: The Life and Times of Jesus of Nazareth,” which he calls “an absolutely genius work of synthesis of the last 60 to 100 years of scholarship on first-century Palestinian Judaism.”

Schamus penned a first draft of the screenplay along with a 300-page compendium of research keyed to every scene.

“A great many of those [script] pages were just recitations of prayers that would have been part of the day of the characters,” Schamus says modestly. “I hope it gets made, because it was really fun to write.”