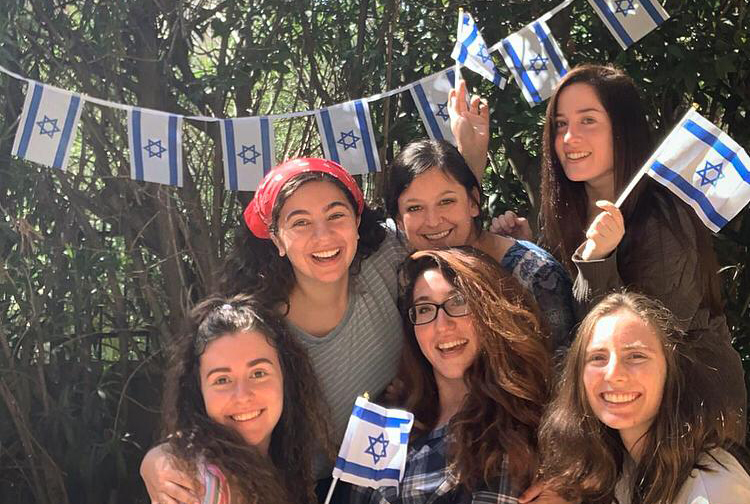 Photo: Raizel (center) with some of the other Masa Israel Teaching Fellows.

When Raizel O’Brien graduated from Portland State University in 2019, she was contemplating making aliyah when she discovered the Masa Israel Teaching Fellows with Ramah Israel program.

“I love living in Jerusalem,” says Raizel. “There’s a very special spirit here, and I already had experience with living here, so at the end of college, I was looking for my next step after graduation, and I thought it would be lovely to come back.”

Raizel first lived in Jerusalem when she participated in a gap year program after high school studying Judaic Studies at Tomer Devorah Seminary. After that program was complete, she went on to do an internship at a nonprofit mental health center for English speaking teens in Jerusalem.

She moved to Israel in mid-August and began teaching in September 2019. The goal of Masa Israel Teaching Fellows is to “advance the English communicative skills of Israeli students throughout the country.”

Her previous teaching experience includes time at The Gan Preschool in Portland. “Raizel is a vibrant young adult with a passion for her Jewish heritage,” shares Mimi Wilhelm, director at The Gan Preschool. “She lovingly shared her enthusiasm with the children at our Gan preschool while working as a Morah (teacher) for a few years. She has a joyful disposition and builds community wherever she goes.”

Most of the people in her fellowship cohort are from the United States and Canada. 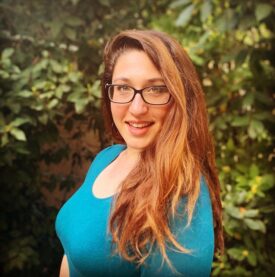 Every fellow is assigned a host teacher and a school. Raizel is teaching English at a school in Pisgat Ze’ev, the largest residential neighborhood in Jerusalem.

“My host teacher has been such a mentor in my life,” says Raizel. “She has been teaching for decades and has such a wealth of knowledge and really works with me.” Raizel has a strong background in education but had never taught a language before. “Teaching a language must be done in a multidisciplinary approach to be done well, so its been amazing learning how to hit a topic from every angle.”

She teaches fifth and sixth graders, and part of their multidisciplinary involves game-based learning. This format engages the children and gets them excited about learning a language and produces quicker results.

Raizel explains that one day they may be throwing a ball while the kids are speaking a dialogue they memorized using new vocabulary words. “It always has to be very involved with writing, memorizing, speaking, moving – we also integrate art and teaching other people,” she says.

She enjoys teaching and didn’t want to leave “her kids” when the pandemic crisis arose. Some people traveled home for Pesach and did not return. Others left right after the holiday, fearing that they would not be able to leave Israel once the program ended.

“Back in March, I was thinking about my birthday, Purim and all these fun activities I had going on,” she remembers. “People were talking about it, wash your hands a lot, etc. Then the Shabbos after Purim it was like boom! We were on lockdown.”

A few times when Raizel left her apartment to go to the grocery store, she was stopped and questioned where she was going. She is starting to feel a greater sense of community returning as the restrictions are loosening now.

“We went over that big hump, and now they are opening up school again for grades one through three,” says Raizel. “We will still be in Zoom classes for grades four through six.”

Raizel has been doing a lot of curriculum planning as she prepares to move to more structured Zoom classes. In the interim, she was doing a lot of WhatsApp calls and group texts, and the students would turn in their assignments via WhatsApp.

She got extra creative with one assignment during the lockdown. Since her students enjoy learning through songs, she chose the song “Here Comes the Sun” by the Beatles because of its message of hope and happiness.

“They chose lyrics that spoke to them emotionally and had to memorize part of the song, recite it and draw a picture that represented the lyrics they chose,” says Raizel. “They also had to record a video of themselves reciting the lyrics and why they chose them and what their drawing meant.”

Raizel is happy to have had the challenge to stretch her educational skills during this unprecedented time, and she is glad the kids are still getting the education they need. “I think they appreciate the structure, although they might not know it, of still having school work and exercising their brains,” she says.

When her fellowship ends on July 2, she will return home but anticipates returning to Israel in the fall. She has an older sister who lives in Tel Aviv and a younger brother who made aliyah when he was 14 to attend high school in Israel and joined the Israel Defense Forces on March 29.

Raizel is considering making aliyah when she returns. Despite having three children in the country, she jokes that her parents have never been to Israel. Her father is not Jewish, but her mother joined Chabad after they got married, so she has been part of the Chabad community in Portland “for forever.”

“Growing up in Chabad, there was always a lot of Israel pride and deep connection,” says Raizel. In conjunction with the fact that I live in a very proud Jewish home and community.”