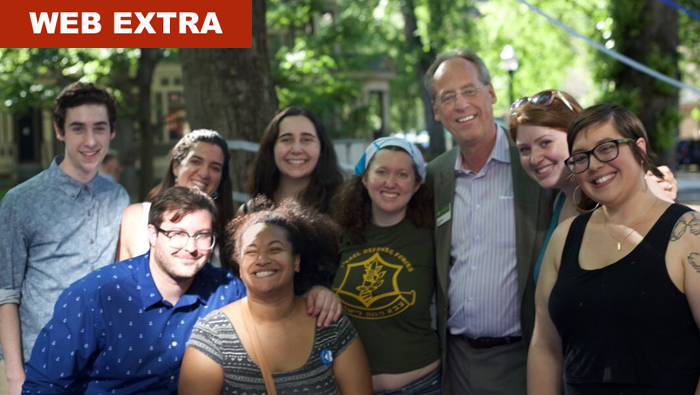 Following is the text of the June 2, 2016, statement from PSU President Wim Wiewel:

The Associated Students of Portland State University International Affairs Committee introduced a resolution to student government on May 23 calling for PSU to divest from companies doing business with the Israeli military. The resolution follows a recommendation from the Boycott, Divestment and Sanctions (BDS) movement, which was started in 2005 by pro-Palestinian organizations seeking international pressure on Israel to end settlements in occupied territories and other measures. The BDS resolution calls for divestment from companies such as Caterpillar and Hewlett Packard.

As President, I support the right of students to express political, economic and social opinions. In this case, however, I think the resolution is divisive and ill-informed.

As an initial matter, it is important to note that Portland State University does not directly invest its funds. We are one of six Oregon public universities whose funds are deposited in the Public University Fund managed by the Oregon State Treasurer, who is prohibited by law from holding any equity investments. Thus, the resolution has no practical effect and is intended as a political statement.

More importantly, I do not support this resolution because I am concerned by the divisiveness and tenor of the conversation that has taken us to this place. There is no question that members of the PSU community have divergent views about Israel, Palestine and the Middle East in general. Robust debate is central to the educational mission of a public university. So it is not clear why the ASPSU International Affairs Committee feels it is appropriate to dictate an opinion about the policies of one nation when there are multiple governments and corporations whose policies and practices we may disagree with.

We are responsible for respecting the rights of all members of our campus community. The tone and tenor of the BDS movement has made members of our community feel unsafe and unwelcome at PSU, and it is not acceptable to marginalize or scapegoat them. Anti-Semitism cannot and will not be tolerated on our campus.

We place a high value on the cultures, religions and political views that make up the rich mosaic of our community. I believe this resolution would divide us at a time when we are striving to nurture our diverse and inclusive campus environment.