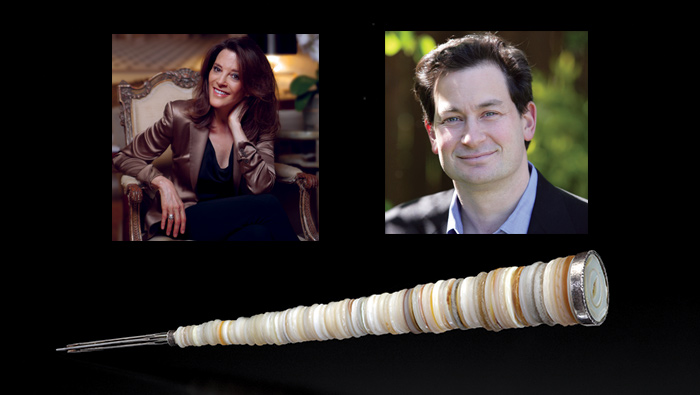 Havurah Synagogue in Ashland will host Marianne Williamson for a three-hour seminar entitled “Love as a Spiritual Revolution.”

An internationally acclaimed spiritual author and lecturer, Marianne will share insights from her bestselling book  A Return to Love from 6:30 to 9:30 pm, Feb. 11, at the Mountain Avenue Theatre in Ashland.

The following  paragraph from that book is considered an anthem for a contemporary generation of spiritual seekers:

“Our deepest fear is not that we are inadequate. Our deepest fear is that we are powerful beyond measure. It is our light, not our darkness that most frightens us. We ask ourselves, Who am I to be brilliant, gorgeous, talented, fabulous? Actually, who are you not to be? You are a child of God. Your playing small does not serve the world.”

Havurah Rabbi David Zaslow says, “In every generation there are many incredible teachers, but only a handful are true luminaries. Marianne is one of those brilliant lights who seems to have been deployed by the Divine to aid us in understanding our interconnectedness, and the underlying power of love that is the underpinning of the cosmos. This is a one-of-a-kind opportunity for people on all paths and in all religions to come together to learn and celebrate together.”

He adds that Marianne is “well qualified to clear a path in the wilderness to help us find what all of us are seeking – the miracle of love.”

A native of Houston, Marianne founded Project Angel Food, a meals-on-wheels program that serves homebound people with AIDS in the Los Angeles area. Since its opening in 1989, Project Angel Food has served more than 8 million meals. Marianne also co-founded the Peace Alliance. Advance tickets are available online at brownpapertickets.com or at the Music Coop, 268 E Main St. in downtown Ashland. Premier seating in advance; $75, general seating, $65. Tickets at the door are $80/$70. Limited scholarships and discounted tickets for groups of 10 or more, as well as tickets for those requiring wheelchair access, are available by calling 541-488-7716.

The 10th annual Weekend in Quest, sponsored by the Institute for Judaic Studies of the Pacific Northwest, will take place in Astoria, March 4-6, 2016. Registration is now open.

The event features Professor Noam Pianko, director of the Samuel and Althea Stroum Center for Jewish Studies at the University of Washington in Seattle.

Are Jews a nation, religion, ethnicity, culture or descent-based community? Pianko, a respected teacher and well-published researcher on this subject, will present four lectures during the weekend on the topic: “Is There a Future for Jewish Peoplehood?” He will consider the past, present and future of the Jewish-peoplehood idea, in the United States and the world.

In addition to the opportunity to study with Pianko, the weekend will also feature Shabbat services led by David Fuks, formerly CEO of Cedar Sinai Park in Portland. The weekend will also include schmoozing time, delicious catered community meals, lighthearted entertainment and some dancing, all within view of the magnificent Columbia River at the Holiday Inn Express in Astoria.

The event uses the entire meeting and dining capacity of the hotel, so attendees are limited to 70. Registration can be done online at weekendinquest.org, or by check and mail using a form you can download and print from the website. You can also contact Mimi Epstein at 503-203-2671 or mimiepstein42@comcast.net.

Pentacle Theatre in Salem inspires and educates through The Diary of Anne Frank
The Diary of Anne Frank reveals power, anguish and inspiration within the words written by a young Jewish girl during the Holocaust. The challenge today is keeping Anne Frank’s story alive – and using it as a springboard to combat modern-day intolerance and prejudice.

Pentacle Theatre, the 61-year-old award-winning community theater in Salem, will produce 16 performances of the 1997 Kessleman adaptation of The Diary of Anne Frank March 4-26 as part of the theater’s 2016 season.

The 7:30 pm, March 15 performance is a benefit for Salem’s Temple Beth Sholom.

In addition to the show, Pentacle Theatre will provide a wide variety of educational programs and experiences about Anne Frank and the Holocaust. Several of these programs are conducted in partnership with Anne Frank Center USA in New York and include:

Pentacle Theatre during the play’s run. The docent-led exhibit features Anne Frank photographs and historical artifacts, a 28-minute documentary and other materials about the Holocaust.  Community members can view the exhibit even if they don’t attend the play.

Cast workshop – An expert from Anne Frank Center USA will conduct an on-site workshop with cast members of Pentacle Theatre’s The Diary of Anne Frank to help them better understand their characters and the play’s historical importance.

Educational programs – A variety of teacher training and student programs will be conducted to help Salem-area students learn about Anne Frank and the Holocaust.

On Feb. 3, come to the museum at 7pm for “Delicate Regard – An Artist Talk with Anika Smulovitz.

In conjunction with OJMCHE’s exhibit Pointing the Way, an exhibit about ceremonial Torah pointers, Boise-based artist Anika Smulovitz will speak about her art and metalwork.  Two of Anika’s Torah pointers are held in the Barr Foundation’s collection, one of which is currently on display at OJMCHE.

This lecture is co-sponsored with the Museum of Contemporary Craft and is underwritten by Clay Barr and the Barr Foundation Judaica Collection.

Tickets are General Public: $5; MoCC and OJMCHE Members: Free, but RSVP required.
At 1 pm, Feb. 7, Miriam Greenstein will be the third of four Sunday Holocaust Speakers’ Bureau presentations at OJMCHE.

Born in Poland in 1929, Miriam Greenstein was the only member of her family to survive the Holocaust. After moving several times with her family to evade the Nazis, she was captured and forced into the Lodz Ghetto in 1941. From there she was sent to the Auschwitz, Bergen Belsen and Magdeburg concentration camps before she was forced to return to Bergen Belsen. There she survived until British troops liberated the camp in 1945. After the war Miriam moved to Portland to be with her only living relative. Today she is an active member of the Speakers’ Bureau.

The annual PJA/MJCC Used Book Sale returns in April, but now is the time to donate used books for the sale.

Plan to come to the sale at the same location April 3-5. Sales benefit Portland Jewish Academy and the MJCC.

Email pjabooksale@gmail.com for questions or to schedule a pick up if needed. No encyclopedias please.

'Previews' has no comments