Becca Dorn-Medeiros, Ed.S., LPC Intern, NCSP, has been working as the primary school psychologist for Grant High School in Northeast Portland since 2012. She is also currently working on her LPC (licensed professional counselor) license and has her own private practice.

At Grant, Becca assists with the QSA (Queer/Straight Alliance) Club and is also a co-advisor for the queer student group. She also holds a drop-in “talk time” for transgender, non-binary, or gender-nonconforming kids.

When Jewish Family & Child Service was getting inquiries from parents and students regarding a queer Jewish group in Portland, they reached out to Becca and asked if she would like to be involved. 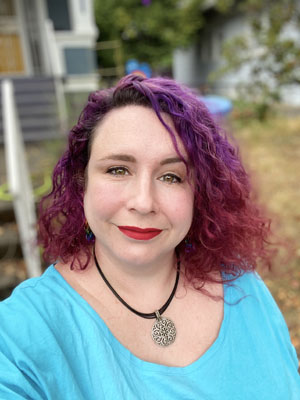 The new group is called QJYPortland, Portland’s first LGBTQQIA+ and beyond Jewish Youth Group. It is a Jewish or Jew-ish group for youth ages 14 through 17, who identify as lesbian, gay, bisexual, transgender, queer, questioning, intersex, asexual, allies, or anywhere on the spectrum of gender creativity.

“We can bring these kids from different synagogues and different youth groups all together to have that intersectionality of queer and Jewish in one youth group,” says Becca. “They reached out, and as somebody with a background in mental health and queer youth groups, I thought that sounded kind of dreamy.”

Becca grew up in upstate New York and was very involved in Jewish youth groups. She believes having a place where these teens that don’t identify with the dominant identity can meet is very valuable. QJYPortland can provide that place where kids from different synagogues, different youth groups, can come together and have that intersectionality of queer and Jewish in one youth group.

“These kids are so much more in touch with their identity than anyone was when I was in high school, she says. “They understand that gender can be fluid, that identity can morph over time. That can be isolating at school or in your family. So it’s helpful to see yourself, mirrored or reflected in peers, to feel less alone, less isolated.”

Becca would like the kids to take the lead in the direction of the group. “I’ve got plenty of topics I can bring to the table,” she says. “If they’d rather go in a more activist group or if they just want camaraderie. Sometimes there’s an assumption that that queer youth looking for a group need mental health support. But sometimes they just need peers.”

But if they need mental health support, she can help with that. She also has many resources to pull from if they need anything ranging from therapy to a clothing exchange.

“There are all kinds of stuff out there that kids may or may not know where to find, but we can certainly pull from all those resources,” says Becca.

QJYPortland will hold meetings every other Wednesday at 4:15 pm. This biweekly meeting will be held virtually through a HIPAA compliant Zoom platform. The next meeting is scheduled for Oct. 7.

Please email qjyportland@jfcs-portland.org for the meeting ID and further information.