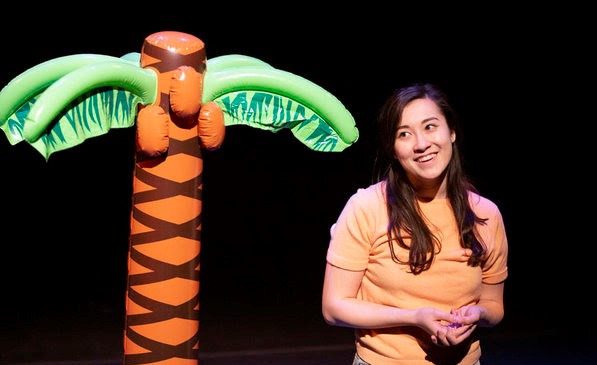 Julie Hammond presents the Portland premiere of her show “Other Inland Empires” at Portland Playhouse June 26-30, 2019.

When writer/director Julie Hammond learned that Gidget, the quintessential California girl and 1950s spark of a global surf boom, was really the Jewish daughter of Austro-Hungarian refugees, she began to imagine events in reverse. What would happen if she, a California-born Jew, went to Central Europe to learn to surf?

Armed with an audio recorder and faith in sun and waves, Hammond traveled east in a quest to weave her California surf-bum family with her grandmother’s Holocaust survival, and the hope to discover the details of her family story.

A series of stranger-than-fiction events — from discovering surf culture in a landlocked country to a wakeboarding accident that leads to a Slovakian hospital — open the door to her grandmother’s moving tale of survival, and lays the ground for this new play.

When the play opened in Vancouver, BC, Julie told Vancouver Presents, “It’s an autobiographical comedy about the Holocaust and a tragedy about surfing. How often do you see that?”

Dreamy pop music, inflatable palm trees, slow dances, and untold family stories mix with playful humour, seagulls, and the one and only Gidget.