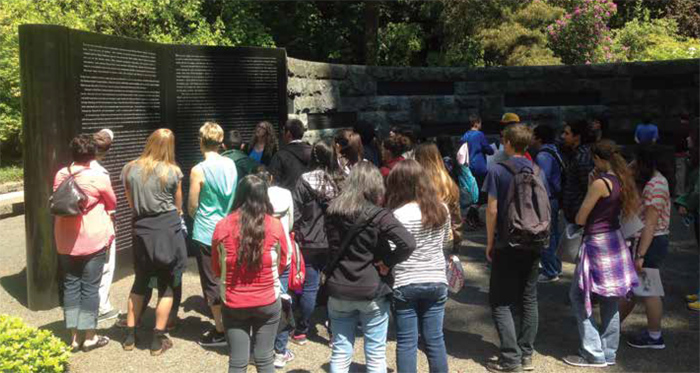 Six Oregonian women – five of them Holocaust survivors and one the daughter of a survivor – gathered in 1994 to discuss creating a Holocaust memorial in Portland. It would honor all their lost family members and also the multitude of others who had suffered profoundly and were robbed of life during that horrific time. Because these millions had perished and had no final resting place, this would provide a visible monument where people could go to pay tribute. As voiced by survivor Eva Aigner, “We never had a place to go to remember. The memorial would be a place to go to think about them and reflect.”

The original plan was to raise funds for a relatively modest memorial at the JCC. However, a tremendous evolution took place between the original conversation and the building of the memorial now found in Washington Park. As the planning progressed, the City of Portland generously donated a site, and a coalition comprised of a broad spectrum of community, religious, and civic organizations was formed to raise funds and coordinate planning. The first chair of the coalition was Jane Rosenbaum, who had been a part of the original group that conceived the idea. A design team was assembled, consisting of artists Tad Savinar (who sourced the historical objects surrounding the monument and compiled the statements from survivors inscribed on the Witness Wall), and Paul Sutinen; a writer and historian, Marshall Lee (who wrote the text for the history panels that tell the story of the Holocaust); landscape architects Marlene Salon, John Warner, and Marianne Zarkin, and typographer John Laursen (whose job was to determine how the various text elements should be displayed). Finally, on August 29, 2004, a decade after the first meeting of the group of six, the Oregon Holocaust Memorial opened to the public.

Since that time, three of the survivors who initiated the project and one of the members of the design team have passed away. And so on October 27, a panel of all of the available participants in the project will be assembled to discuss their memories of how the memorial came to be. John Laursen, lead organizer of the event, is enthusiastic about recording the history of the project, and comments that all of the participants each “have their own recollections of pivotal moments.” He notes that the discussion should be of special interest to current members of OJMCHE who were not connected to the memorial when it was being built because at the time the Oregon Jewish Museum and the Center for Holocaust Education had not yet merged. It should also appeal to all others who are curious and would like to hear more about how the memorial came to be, especially those who are new to Portland.

In August, local survivors, friends, and families met for their annual picnic at the site of the memorial. Eva Aigner reports that it was immensely gratifying to see the visible proof that all the work was worthwhile. “The biggest gift,” she says, “was observing the many visitors looking around, reading the walls. Thousands of students went through this year, and now, with the new Oregon Holocaust and Genocide Education Bill recently signed into law, it should receive more visits than ever. Students will be able to take field trips to the memorial, read the survivor quotes, and experience the history in a profound way.”

Free with admission, free for members

A conversation on the decade-long process of creating the Oregon Holocaust Memorial, led by OJMCHE board member John Laursen, who was a member of the design team. Other panelists will include Holocaust survivor Eva Aigner, second-generation survivor Debbie Montrose, Lisa Kaner (who chaired the Oregon Holocaust Memorial Coalition during construction), design team members Marshall Lee, Marlene Salon, Tad Savinar, Paul Sutinen, and Marianne Zarkin, and construction manager Paul Schlesinger. Each panelist will talk briefly about their experience, followed by discussion and Q&A.