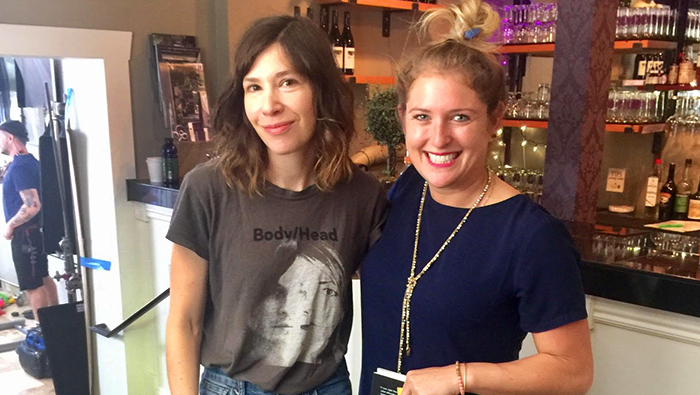 Portlandia, a sketch-comedy series that parodies life in Portland, has won four Primetime Emmys since it came on the air in 2011. In January the show’s creators and costars Fred Armisen and Carrie Brownstein revealed that Portlandia’s eighth season in 2018 would be its last.

Opal 28 will be part of Portlandia lore, when the episode filmed there airs next winter. The intimate event venue is located on Northeast 28th Avenue and Glisan.

“A location scout happened to be walking by and peeked in the windows,” explains Margot. “She had a vision for a romantic dinner scene in our Main Room!

Margot says being part of Portlandia was exciting.

“The crew came in around 6 am and transformed the venue into a whole new environment; as quickly as they set it up they took it down and by 2 pm the filming was complete,” says Margot. “The cast and crew were so nice to work with!”

“Both Carrie and Fred were incredibly nice and much smaller in real life,” she adds. “Carrie was happy to pose for a photo and was grateful to be in my space. Fred introduced himself right off the bat with a firm handshake and genuine ‘how are you?’.”

“Winning best venue for intimate gatherings is such an honor,” says Margot. “Portland has so many unique places to get married so this award is especially flattering.”

“My team and I pride ourselves on creating the most special day for our brides and grooms – alleviating as much planning stress as possible and making a comfortable and fun environment for any special occasion,” says Margot.

“It’s a unique Portland wedding and event experience without being in a hotel with so many formalities,” Margot told Oregon Jewish Life for a 2015 article. In the same article, she says the name was inspired by her grandmother Sadie Feves, z”l. “My late Gram Sadie’s birthday is on Oct. 28. Opal is the October birthstone, and we are located on 28th Avenue.”

After graduating from the University of San Francisco with majors in business and communications, Margot moved to Chicago and worked in sales and marketing, predominantly in the hospitality and event industry. These skills have transferred into the development of her own private event space in inner Northeast Portland – Opal 28.

Margot returned to her Portland roots in 2010. Shortly after returning she started a dinner delivery service called Dinner At Your Door out of a rental kitchen space. In the process of looking for her own commercial kitchen, the concept for Opal 28 evolved.

Besides being an intimate event space, Opal 28 has a commercial kitchen and hotel-style apartment accommodations.

'Opal 28 hosts Portlandia and Weddings' has no comments