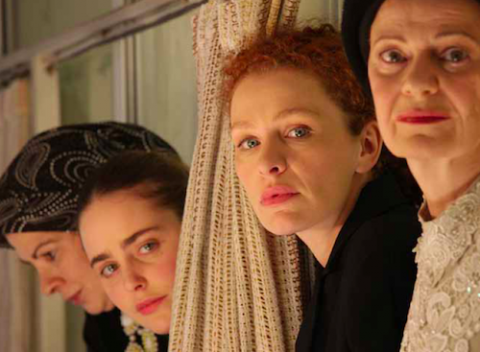 Israeli filmmaker Rama Burshtein’s gripping debut, “Fill the Void,” focuses on the quietly dramatic domestic lives of religious Jews in Israel. Even more unusual, however, is that the director is a member of that community, an observant Jew – and, as you probably discerned, a woman. Born in New York and a selfdescribed “wild child” back in the day, Burshtein became religious while she was studying at the Sam Spiegel Film and Television School in Jerusalem.

The deeply empathic “Fill the Void,” she emphasizes in an interview after the film screened in the San Francisco International Film Festival in May, wasn’t made for her community, but for everyone else. “It’s you that doesn’t know about us,” Burshtein explains. “I did the film out of pain, that we’re portrayed only [by] outsiders. No one from within really portrays us, and we have no culture voice in the world, which is crazy because we’re 3,000 years old and we’re very wise and we’re very open-minded, and it’s crazy that we don’t have a voice. So I made a little squeak, trying to say
something from within.”

“Fill the Void,” which Burshtein calls “a crazy love story” and a journey “from the impossible to the only possibility,” is the opening night film in the Portland Jewish Film Festival. The film revolves around Shira (Hadas Yaron, who received the Best Actress prize at the Venice Film Festival), a teenager whose marriage plans are upended when her pregnant older sister dies, leaving a widower and a newborn. Torn between her dreams and a sense of responsibility to her parents, Shira grapples with the strange, alluring and vaguely frightening prospect of marrying her brother-in-law. Unlike most films set among traditional, cloistered and religious people, the parents and rabbi aren’t depicted as agents of repression and suffering.

“I think it’s like a secret in life, which of course I did not make up, that if you start seeing the world without villains, then dialogue can start,” the 40-something filmmaker muses. “It’s very childish to work with villains and good guys and bad guys. So I specifically went [about] opening the dialogue.”
Misconceptions around arranged marriage are likewise addressed, with Shira having a definite say in who she marries. In the mysterious and amusing opening scene of “Fill the Void,” she and her mother surreptitiously check out a potential prospect – proposed by a matchmaker – in a supermarket.
“This is like a true portrait,” Burshtein declares. “This is how it works. Shira would probably meet the guy from the super, and he’s a good guy and she likes the way he looks, and they will marry and from that commitment they will build generations.

She will sit with someone, and if it doesn’t feel right, and it doesn’t move her in any way, she will not marry him.” Burshtein evinces amazement that the film has traveled as far as it has, being selected last year as Israel’s official submission for the Foreign Language Oscar and now receiving a national release in the United States. Above all, she’s stunned at the range of ways in which the audiences interpret and respond to the
characters.

“There’s something very weird about this film,” Burshtein confides. “I think if I had really meant it, I would be a genius. But because I’m not a genius, I didn’t really mean it. I will not take that feather and put it on my hat because it’s really weird. Everyone reads [the film] differently. But really differently.
Someone will say this is a war movie, and someone will say it’s a peace movie. This is a victims’ movie, and someone will say it’s a love story. Some think it’s so tragic and some think it’s so romantic. It’s like opposites. I have no idea how it happened. I did not mean that. I meant to do a love story, only very delicate.

The real location of the film is Shira’s heart, and the journey is to understand what she feels.” Burshtein takes a breath, then acknowledges that her mode of storytelling inadvertently generates tension and mystery. “[Her heart] is where everything happens. It’s a house with rooms. Because she doesn’t have the words for it, because I am crazy enough not to [include] a girlfriend so she would tell her what’s going on, it’s only up to you to decide.”

Michael Fox is a San Francisco film critic and journalist.