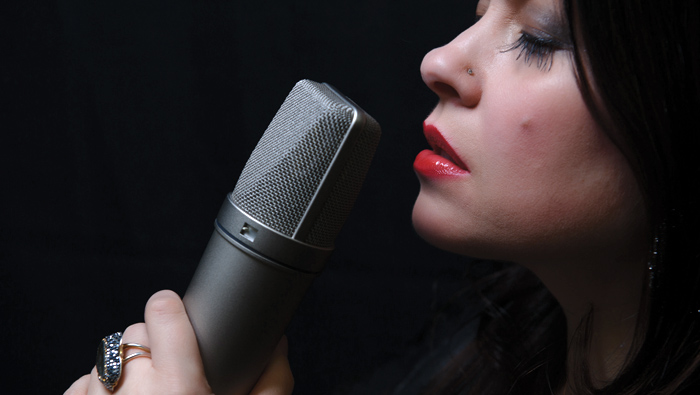 Four years after her last tour, Neshama Carlebach is once again on the world stage singing the beloved songs of her late father, Rabbi Shlomo Carlebach, and sharing his message of love for all humanity.

Neshama will be in Ashland for an April 7-8 “Legacy” Shabbaton featuring a concert, storytelling, teaching and conversation, all intermingled with music.

After four years spent in courtrooms in an “intense divorce,” Neshama says she emerged with an even stronger sense of self, a restored relationship with God and a renewed commitment to share her father’s legacy of music and love for humanity. She resumed her appearances in October of last year and was gratified to be so in demand after her hiatus with bookings across America, Israel and even Cuba.

She was not grateful to find that the world needed her father’s music, message and love more than ever. The U.S. election was the most divisive ever, and religious divides in Israel were heated. During Hanukkah, she was singing with the Women of the Wall at the Kotel when they were set upon by screaming haredi women, an event from which she is still reeling.

“In my humble opinion, love is our only hope,” says Neshama. “Music is a manifestation of love. There is harmony in music. It is a language we can all relate to. … Music is a very big unifying force in our world. We all need each other.”

She describes her father as the embodiment of that harmony. Reb Shlomo has been called the most influential composer of Jewish religious music of the 20th century. The folksy, guitar-playing Orthodox rabbi created hundreds of uplifting melodies including legendary classics such as “Am Yisrael Chai.”

“He loved humanity,” says Neshama. “He wanted to give the best of himself to everyone he met. … I hope I can continue to keep him here with music.”

Her Ashland Shabbaton is part of that mission. She last sang in Ashland in 1993.

“Reb Shlomo left a great legacy to the entire Jewish world,” says Rabbi David Zaslow of Havurah Shir Hadash, organizer of the Shabbaton. “Not only is his music sung in so many synagogues, but the way he combined Torah teachings, storytelling and music was unique. He didn’t just teach and then sing a song. He sang his teachings, chanted his stories and told his melodies.”

“She was just a teenager then, but the power of her voice and her spiritual presence was palpable,” says Rabbi David of that concert with her father. “We all knew then that she wasn’t just singing songs, but she was singing to G-d, she was singing for G-d. None of us knew then that it was going to be Neshama who would inherit the legacy of Torah teachings, music and storytelling of her father.”

Neshama rocketed into the public spotlight in 1994 when her father died after suffering a heart attack during an airline flight while on a worldwide tour – a tour she felt compelled to continue so as not to disappoint her father’s fans.

Neshama was raised in the Orthodox world, which prohibits men from hearing women sing, and she initially did not want to sing on stage with her father. But it was a way to feel close to the man who seemed to belong to the world. When the two began performing together, they were both vilified for breaking the kol isha prohibition.

When her father died, Neshama stepped in and sang at the concerts booked before his death. While she was assailed by some for her audacity to perform for men, many more were thrilled to hear her carry on the legacy. Two of her first concerts in 1994 were in Oregon – Portland and Eugene.

“At the very beginning, I sang because I was desperate for the world not to forget him; it was connected to my own sorrow,” explains Neshama. “It took me several years to own the fact I had something to offer myself. I had to accept that I am also a healer and valuable.”

She performed tirelessly for 15 years, culminating in 2011 with her seventh recording, “Higher, Higher,” which was a six-time entrant in the 2011 Grammy Awards. With two young sons and a crumbling marriage, the next year her performing became sporadic.

“I was so full of sadness, I wasn’t able to be there for people, I couldn’t give back love,” she says. “I had no music in my heart and head.”

Looking back, she finds the painful journey served a valuable purpose.

“How would we know we were happy if we never felt pain,” she says. “No one wants to live in pain, but if you knew you would survive, if you could tell yourself you will get through. … I was so full of sadness, now I’m feeling healed and ready to give.”

“What a gift to have something that breaks you in half and then rebuild; now I feel so whole,” says Neshama, adding she no longer recognizes the person she was before her divorce journey began. “Every day I get to sing, I’m giggling. Now I am awake – what a gift that is.”

But this time around she is remembering to maintain a life/work balance. Rather than a traditional tour, Neshama says she follows a schedule that suits her lifestyle yet enables her to share her father’s legacy with the world. As the mother of two sons, she says she does quick “in and out” appearances on the weekends the boys are with their father, and then she spends the week relishing her role as a single mother.

Her sons have both been called music prodigies. Micah, 6, is nicknamed Mini Jimi at the music academy where he is the youngest student and plays Jimi Hendrix on his guitar. Rafael, 10, has been known as a drum prodigy for a few years. Neshama says she sees her father reflected in her sons’ talents.

“They are my best thing in the world,” she says, adding, “My mother spends a lot of time with me, and my father is with me from another space – the circle is full.”

In September she performed at the International Lions of Judah conference, in October she started touring in earnest performing in four states and in November she was inducted into the Brooklyn Jewish Hall of Fame.

Her fall tour included some interfaith appearances with the Glory to God Singers, a gospel choir she began singing with many years ago. Just as she has reached out to all branches of Judaism, she also wants to reach out to other faiths as she continues to embrace her father’s love of all humanity.

“We are singing together because we are brothers and sisters,” Neshama says. “The love we give to audiences can make a difference. … At this point in our country’s history I will fight harder than ever to be connecting and to love every human being.”

Then in December she experienced firsthand the religious divide in Israel. Invited to sing during a Hanukkah celebration in the Jewish homeland, she traveled there, eager to also visit the Kotel, which her sons call “Hashem’s House.” She joined the Women of the Wall for a rosh chodesh (new moon) prayer service, recalling that her father bought the first Torah for those women in 1993. Not only was the prayer service disrupted, but her sponsors withheld payment for her trip, treating her as a “fallen soul in need of saving.”

In an article in The Forward, Neshama described the chaos at the Kotel:
“Then, while singing my father’s Pitchu Li, the prayer for opening the Gates of Justice, I felt the air shift and grow colder. The sounds of shrill whistles filled my ears and the voices of my sisters were buried. Where there had been peace and happiness, I was now engulfed in fear.

“The whistles and screams grew louder. I soon realized that our attackers were other women. Standing with their backs to the Kotel and God, they yelled “Chilul Hashem!!” (desecration of God’s name). “Zonot!” (whores). When they ran out of breath to scream, they blew their painful, screeching whistles.

“The women around me prayed louder for we were not just singing for God; we were engaged in battle. Unaccustomed to confrontation of this sort, I could not hold back my tears, my horror and shame. As the first Orthodox woman to publicly sing for a mixed audience I have faced criticism, scorn and judgment my entire life but this was a new level of assault. I stared at their angry faces. Are we all not Jews? Are we not one People, arevim zeh lazeh, responsible for one another?”

The day after Neshama drafted this essay, Israel’s high court ruled that the Western Wall Rabbi must explain why women should not be allowed to pray at the traditional plaza. Neshama added a paragraph to her piece before it was published, ending with the prayer: “Blessed, Holy One: Please Open the Gates of Justice to usher in this long-overdue change. Let us pass through your sheltering arms, embrace each other as one and sing your praises.”

The Women of the Wall also enjoy the support of the Reform Movement, one of the reasons Neshama proclaimed her solidarity with the movement three years ago.

“I feel in alignment with the Reform community,” she says. “When URJ President Rabbi Rick Jacobs’ spoke on Audacious Hospitality, I was moved to tears.”

The URJ website defines Audacious Hospitality as “the focused effort to embrace our diversity and reach out to those currently not engaged in Jewish life. … Audacious Hospitality is a transformative spiritual practice rooted in the belief that we will be a stronger, more vibrant Jewish community when we fully welcome and incorporate the diversity that is the reality of modern Jewish life.”

Neshama says a Judaism where everyone is welcome resonates with her. “That to me is my father’s Judaism. It is the Judaism I want to give my children.”

While a Judaism that welcomes everyone regardless of gender, sexual orientation or difference appeals greatly to Neshama, she says she is not a Reform Jew or an Orthodox Jew.

“I feel just Jewish,” she explains. “It is time to break down the walls and be one and be present together.  Nothing matters more. Let’s be one.”

Finding unity rather than building walls is the message Neshama hopes to share at the many bookings she has accepted in the coming months. Oregonians can hear that message and her father’s songs next month in Ashland.

Retired Temple Beth Israel Rabbi Yitz Husbands-Hankin is looking forward to this Shabbaton. He was the rabbi of that Eugene shul when it hosted Reb Shlomo during his Oregon visits.

“I am enthusiastic about hearing Neshama as she carries forward her father’s great legacy,” says Rabbi Yitz. “Reb Shlomo, z’l, had an extremely rare and precious gift for bringing pure and holy music into this world. He seemingly held the keys to the heavenly chambers from which sacred melody flowed. His music touched people of all ages, Jews and non-Jews, because of the stunning beauty found in his melodies. I look forward to seeing Neshama at the Shabbaton and to seeing how she is adding her own voice to the music and message of the Carlebach legacy.”

Neshama says, “I am ready to do my part to fight in the revolution for love.”