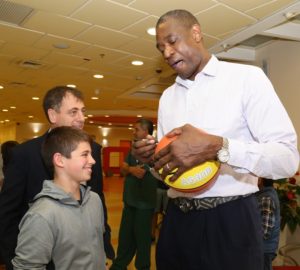 Mutombo met with Sheba’s world-renowned medical experts to discuss this potential collaboration. He also visited with sick Israeli and Palestinian children, signed basketballs and gave away t-shirts to patients and fans. He also experienced the virtual reality technology at Sheba’s Rehabilitation Hospital.

The shared goal between the partners is to bring Sheba’s advanced medical knowledge to the Biamba Marie Mutombo Hospital – named after Mutombo’s mother – which the NBA star founded in the Democratic Republic of Congo in 2007 as a passion project formed from his long-time passion for healthcare.

“I believe that healthcare is a human right,” says Mutombo. “It doesn’t matter where you come from. I believe that everyone who is born, that is living on this earth, should have access to healthcare.”

Mutombo retired from the National Basketball Association in 2009 after 18 seasons. Playing with six teams he he was regarded as one of the top inside defenders of all time. Nicknamed “Mt. Mutombo,” his combination of height, power, and long arms led to a record-tying four NBA Defensive Player of the Year awards.

In 1997, the Mutombo Foundation began plans to open a hospital on the outskirts of his hometown, Kinshasa. In 2006, Mutombo donated $15 million to the completion of the hospital named Biamba Marie Mutombo Hospital, for his late mother, who died of a stroke in 1997. When it opened in 2007, the $29 million facility became the first modern medical facility to be built in that area in nearly 40 years.

“I have been greatly inspired by my visit to Sheba Medical Center and have seen some amazing technology,” says Mutombo. “I believe that Sheba’s humanitarian mission staff will be a great help to my people at the hospital I built in the Democratic Republic of Congo. I’m sure I will be coming back for more meetings in the future.”

Sheba’s leadership team is honored by the future partnership as it reflects their mission to provide healthcare to the Middle East and the entire world. Sheba has a long history of humanitarian efforts, such as its work in Zambia amidst a devastating cholera outbreak.

“We feel that there’s a lot in common in what we do and what is done by Mr. Motumbo, and I think we can definitely collaborate and take this to very beautiful places,” says Professor Bar-On.

Born together with Israel in 1948, Sheba Medical Center, Tel HaShomer is the largest and most comprehensive medical center in the Middle East. Sheba is the only medical center in Israel that combines an acute care hospital and a rehabilitation hospital on one campus, and it is at the forefront of medical treatments, patient care, research and education. As a university teaching hospital affiliated with the Sackler School of Medicine at Tel-Aviv University, it welcomes people from all over the world indiscriminately. To learn more, visit: eng.sheba.co.il