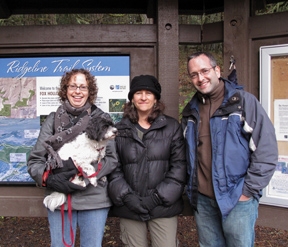 The hills are alive with the sound of… prayer chants? They are when Rabbi Boris Dolin takes eager groups of hikers out of Temple Beth Israel and into the merry woodlands surrounding Eugene.
Influenced by his Oregon upbringing, a cult of forest-screaming rabbis in Israel and a dozen other sources, Rabbi Boris decided in the fall of 2011 to begin his series of monthly “Holy Hikes” as a way to “bring some of the Jewish learning and the social experiences that TBI offers out into the community, and out into the natural areas around Eugene.”
Designed to be family-friendly, with lots of learning, singing and schmoozing, the Saturday afternoon perambulations are casual in nature (literally and figuratively), but also have a deeper purpose.
“For many Jewish people, natural areas are the true ‘holy places,’ especially for those who do not spend much time in synagogues,” Rabbi Boris commented. “With so many unaffiliated Jews in the Eugene area, I hope the hikes provide a comfortable and welcoming environment to share in our Jewish community and learn with others.”
On the next hike in mid-March to the top of Spencer Butte, the theme will be the nature of revelation. There will be a lot of uphill climbing, so it’s not as family-friendly. Rabbi Boris will discuss Moses climbing Mount Sinai in his quest for the Ten Commandments. At the same time, hikers can experience firsthand what it means to get a great new perspective from a mountaintop.
“Because we encourage preregistration,” Rabbi Boris said, “I can tailor the walks to any group dynamic. For example, in both our first hike to Mt. Pisgah, where probably a third of the 16 participants were children, and on our second hike to Hendricks Park, where half were kids, we could incorporate forest observation and learning games to add a bit more fun for the youngsters. So far the hiking groups have been small enough to stay together as one entity. Depending on the mix of adults and children who show up, however, we may be able to split up the groups to do age-appropriate activities and learning, so that everyone can have a meaningful experience.”
The final hike of 2011 along Ridgeline Trail was guided by the words of inspired Jewish thinkers, from Martin Buber to Anne Frank to Albert Einstein. A handout included this quote from David Ben-Gurion: “The energy contained in nature, in the earth and its waters, in the atom and the sunshine will not avail us if we fail to activate the most precious vital energy: the moral-spiritual energy inherent in humankind, in the inner recesses of our being, in our mysterious, uncompromising, unfathomable and divinely inspired soul.”
Such stimulating phrasings, with a bit of Hebrew scripture tossed in, were discussed each time we stopped to appreciate some particularly engaging scene or view. Ridgeline Trail has groves of twisted tree boughs and branches encircled in thick coverings of moss. Swaths of long ferns with curling tendrils run up their entire lengths, creating a stunning effect of peaceful glades in dramatic shades of lush green and rust.
When I asked Rabbi Boris how he came up with the idea to do Holy Hikes, he replied, “There is so much in Jewish tradition, texts and Jewish ritual that invites us to spend more time in nature, both as an opening for spiritual experience and also to connect more closely with the historical experiences of our ancestors. As a native Oregonian (from Astoria), I personally feel most at home in the wilderness, and my Judaism is deeply connected to my love of nature. Many people move to Eugene for the natural areas, and it just makes sense to bring Judaism into these places.”
An unusual influence he experienced during his studies in Israel was the Breslov Hasidim “forest screamers.” The group has adopted the ancient Jewish mystical practice called Hitbodedut.
“They can often be found in the middle of the night in the forests outside Jerusalem,” Rabbi Boris explained. “The practice is more about having a conversation with God – a form of very personal prayer where one actually speaks out loud. They are not always screaming, but may get very emotional in their conversations. As part of my rabbinical studies we did some experimental Hitbodedut meditation, and I found it to be a very useful experience.”
The Breslov branch of Hasidic Judaism was founded by Rebbe Nachman (1772-1810), the great-grandson of Rebbe Yisrael, the Baal Shem Tov.
Rebbe Nachman himself practiced what he described as a technique of “silent screaming,” a kind of meditational shout drawn through imagination from the lungs to the brain. If that sounds very Zen, well, mystical Judaism often does. Nachman wrote that the process actually becomes a soundless scream in your mind rather than on your lips, or as he put it, “a small still voice shouting inside your brain,” bringing emotional release and spiritual connectivity.
“They go to the forest, because it is there that they can be most alone with God,” Rabbi Boris said of the Breslov Hasidim. “In secluded forests or fields, one can more easily have a conversation with God in an intimate, informal manner. Rebbe Nachman poetically taught that when a person meditates in a private outdoor setting like that, all the grasses join in his prayer and increase its effectiveness and power.”
Rabbi Boris’ hikes, which don’t yet involve screaming except with delight, will continue throughout the spring and summer of 2012 and into the foreseeable future. And then, there are even bigger things to come.
“I’ve been working closely planning hikes with Oriana Kahn-Hurwit, who’s been trained as a ‘Nearby Nature’ guide,” Rabbi Boris said, “and she’ll be starting a program called Torah Treks soon, in which she’ll lead Jewish-themed wilderness expeditions – and that could truly be wildly meaningful.”