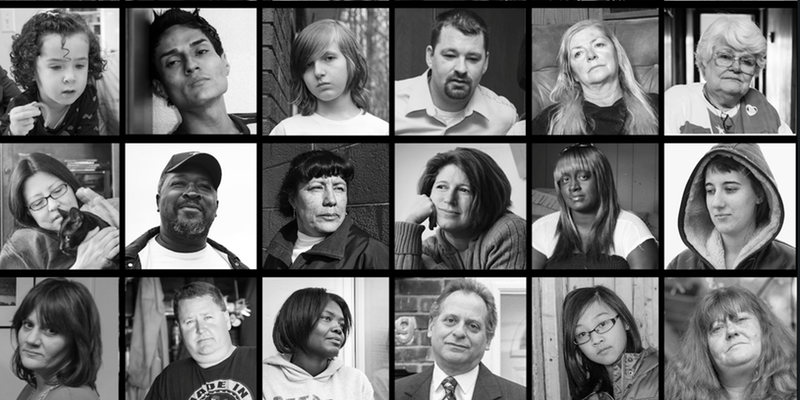 Congregation Neveh Shalom will host “This Is Hunger,” a national touring exhibit that will be in Portland Sept. 1-7. This first-of-its-kind free exhibit will bring the Portland community face to face with the stark realities of hunger through state-of-the-art storytelling techniques and interactive elements.

“We often think of hunger in stereotypes, such as the homeless person walking down the street, but the reality of hunger in Portland is much more complex,” says Rabbi David Kosak at Congregation Neveh Shalom. “This exhibit gives us an opportunity to engage the whole community with an incredible experience that will change the way you look at hunger. We want to help everyone understand that those who are hungry can be your neighbor who just lost her job or the teenager at school who can’t concentrate properly because he isn’t eating enough nutritious food at home.”

Over 16% of Oregon’s population is food insecure and struggles with hunger, significantly higher than the national average of 13%. In other words, 16% of Oregon households have experienced difficulty at some point in the last year in providing enough food for their families.

To raise awareness about the prevalence of hunger in Portland, Congregation Neveh Shalom has partnered with MAZON: A Jewish Response to Hunger to bring “This Is Hunger” to a local audience. The exhibit features black and white portraits by an internationally renowned photojournalist and the stories of dozens of Americans who have had difficulty putting enough nutritious food on the table each day. Through digital and hands-on activities, “This Is Hunger” takes participants on a compelling journey that draws them into the real-life circumstances of these individuals and deepens their awareness about who in America struggles with hunger and why. Visitors are then encouraged to educate others and advocate for change.

“This Is Hunger” is housed in a 53-foot-long double expandable semitrailer that, when parked and opened on both sides, provides nearly 1,000 square feet of exhibit space. The exhibit is on a 10-month national tour that is stopping in more than 30 cities across the country.

For free ticket reservations and tour times, visit this link.

About This Is Hunger

About MAZON: A Jewish Response to Hunger

Founded in 1985, MAZON: A Jewish Response to Hunger is a national nonprofit organization working to end hunger among people of all faiths and backgrounds in the United States and Israel. For more information, please visit mazon.org.

For close to 150 years, Congregation Neveh Shalom has been a haven for our thriving Portland Jewish community.  Through the years, we have worked together to build a community of connection and encounter.  As a welcoming community, Neveh Shalom encourages cross-cultural understanding and dialogue, engaging on multiple levels in interfaith interaction and community-buildin

'National “This Is Hunger” exhibit coming to Portland' has no comments