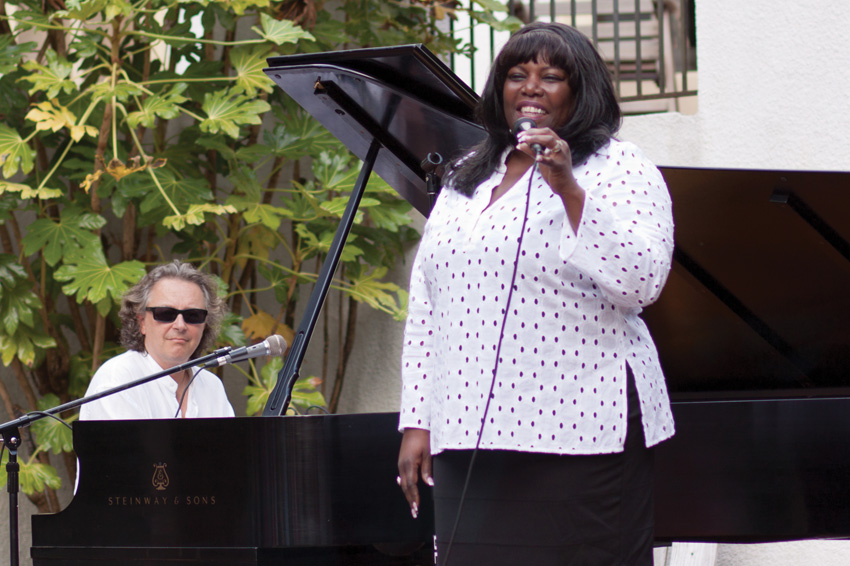 The seeds for “Soul Harmony” were planted four years ago when Portland pianist and composer Michael Allen Harrison and Rabbi Alan Berg collaborated on their first musical theater creation, “Crossing Over: A Musical Passover Story.”

As the pair worked on that musical, Alan says he told Michael their next collaboration should be based on an essay he used to teach a class at Portland State University; the class focused on “Jews who sing the blues.”

The essay by Greil Marcus (which appeared originally in Rolling Stone magazine and was later published in his book The Dustbin of History) tells the story of Jewish songwriter Deborah Chessler (aka Shirley Reingold), and how she and her mother, Irene, managed Sonny Til and the Orioles as they became the first rhythm and blues band. Deborah and Irene travelled by bus through the segregated South and along the East Coast with the black vocal group starting in 1948. After Irene died in 1950, Deborah continued to manage the group alone until 1954.

Greil Marcus will be in Portland April 16 to deliver a free talk at noon at the Burnish Theater, where “Soul Harmony” opens later that night.

During the year Michael and Alan worked on Crossing Over, Alan was also spending an hour and a half a week interviewing Deborah and her husband by phone during the last year of her life. Those interviews, which he taped, provided key insights during the writing of the play.

After Michael, Alan and  Julianne Johnson-Weiss wrote the award-winning musical score for Stumptown Stages’ “It’s a Wonderful Life,” the theater expressed interest in working with Michael and Alan on another project. So Michael and Alan began another collaboration – this time joined by Janet Mouser, who co-wrote the music and lyrics; and Kirk Mouser, director and Stumptown Stages’ executive artistic director. Julianne also returned to tyhe team as “Soul Harmony” co-director; she also appears in a cameo as Ella Fitzgerald.

“Soul Harmony” is more than a story of the manager and band that popularized doo-wop and was inducted into the Rock and Roll Hall of Fame. It is also a story about segregation, anti-Semitism and racism, and the people “walked through segregation and broke barriers,” says Alan.

“Deborah had strong ideological social justice concerns,” he says, adding that the band and Deborah “were equally intuitively committed to inclusiveness at a time when that took more guts than most of us have.”

Deborah and the Orioles came together when Deborah was looking for a group to sing a song she had written called “Too Soon to Know.” A friend called her and had her listen to Sonny Til and his four backup singers on the phone.

That moment is reflected in the play by “The Music Inside,” one of the 10 “relationship” songs Michael composed for the play. In addition to the new relationship songs, the musical also features 16 of the original Orioles songs performed onstage by the actors portraying the band. Sonny Til’s grandson, De’Sean Dooley, portrays the band leader and also provided additional dialogue for the play.

The blending of the new and classic songs is seamless. Kirk Mouser says, “Michael Allen Harrison is masterful in his understanding of musical composition. He has exquisitely blurred the lines of a modern musical composition with the innate feeling of R&B.”

Janet Mouser concurs: “Michael’s music fleshes out the individual characters (like Sonny, returning from the war to find that his freedom had not been won and things were pretty much the same as when he left … in the song ‘Over There’), establishes time and place, and moves us thematically and historically from scene to scene. Michael is a master in creating and understanding the many genres of music and the time periods in which they existed.”

She hopes the musical will bring to light a story that has been in the pages of rock ‘n’ roll history. “It has been recorded by music historians but remains fairly unfamiliar and lost to today’s general public. The genre of music, once referred to as ‘race music’ on our USA music charts, became rhythm and blues because of Deborah Chessler and the Orioles. It is an enlightening story of young musicians in the racially divided city of Baltimore, who saw past their ethnic backgrounds and together created music that would influence all those who followed them. It is an important story, and we hope our musical will be its rediscovery.”

Kirk adds, “ ‘Soul Harmony’ shares a universal language through its music. The result is riveting, participatory and engaging. You can’t help but identify with the protagonists (Sonny, Shirley/Deborah and the music) and the antagonists (society’s ignorance and fear itself). We journey through the relationships identifying self along the way. It is very cathartic.”

WHAT: Musical featuring “The Story of Deborah Chessler, Sonny Til & the Orioles”

WHERE: The Brunish Theater at the Portland’5 Center for the Arts, 1111 SW Broadway