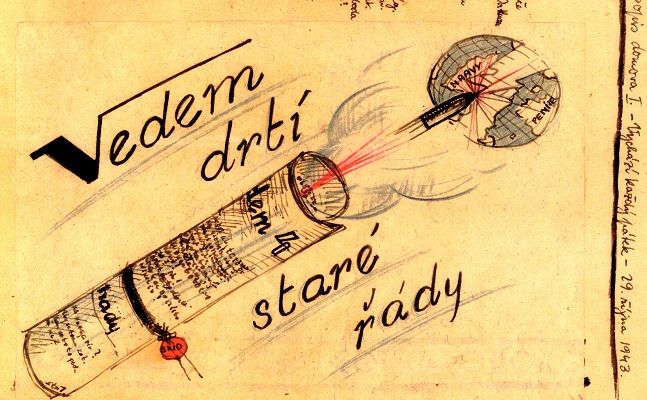 Beginning in mid-February, the Oregon Jewish Museum and Center for Holocaust Education will present two exhibits that explore the Holocaust through the written word and art.

In the museum’s main exhibit hall, Vedem Underground will examine the literary magazine written by Jewish teens imprisoned at the Nazi camp Terezin in German-occupied Czechoslovakia. Using graphics, drawings, paintings, prose and poetry, these teens wrote and illustrated the longest-running underground magazine in a Nazi camp. Vedem, Czech for “in the lead,” documented with defiance, humor and heartbreak the voices of some of the era’s youngest resistance fighters.

Also on view in OJMCHE’s East Gallery is To Tell the Story: the Wollach Holocaust Haggadah. Commissioned by Helene and Zygfryd B. Wollach, the Holocaust Haggadah is richly illustrated with lithographic prints by David Wander and calligraphy by Yonah Weinreb that link the story of liberation from ancient Egypt to the Holocaust. The exhibition includes Haggadahs from the museum collection and local collectors.

Vedem Underground is an art installation that deconstructs and reinterprets the original literary work by breaking down the magazine’s 800 pages (83 weekly issues) and reconstructing them in the form of a contemporary magazine experienced through bold graphics and didactic panels. It includes quotes from five of the original contributors. Pop art graphics, archival photographs, cartoons and pages from the original magazine celebrate the artistic and cultural legacy of Vedem.

On Nov. 24, 1941, the Nazis established the camp at Terezin. About 140,000 Jews were transferred to the ghetto; nearly 90,000 were later deported, likely to their death. The Nazis also used the camp for propaganda, declaring that it was a “spa town” where elderly German Jews could safely “retire.” In June 1944 the Germans permitted a visit by the International Red Cross. In preparation they planted gardens, removed barracks, painted houses and staged a series of social and cultural events. Once the Red Cross departed, the Germans resumed deportations.

At Terezin, the teens who produced Vedem all lived in a cellblock called Home #1. In 1942 they decided to take a stand, speak up and reveal the truth. The project started with a single page; by 1944 Vedem volumes encompassed 800 pages. Secretly the group created one handmade issue each week. Each Friday night the writers would read their articles to their bunkmates, followed by a discussion. At times famous artists or writers imprisoned in the ghetto would sneak in to listen.

Of the 92 boys who passed through Home #1, 15 survived. Among the survivors was Sidney Taussig, who buried the magazine, original artwork and a diary in a metal box. After liberation, he dug up the box with the 83 handmade weekly issues.

“We are excited to showcase Vedem Underground with its messages on the importance of activism, persistence and collaboration, which still resonate today – more than 60 years later,” says OJMCHE Director Judy Margles. “As an education center, OJMCHE hosts more than 10,000 students and teachers a year, and exhibitions such as Vedem Underground provide a profound way to bring the lessons of the Holocaust forward to a new generation. One of OJMCHE’s core values is to teach students to be “upstanders” rather than bystanders, and Vedem is a powerful tribute to the spirit of hope and action.”

“It’s been an honor to showcase the incredibly courageous and creative work by some of the youngest resistance fighters of the World War II era,” says King. “These teenage boys refused to give up their identity, their humanity and their fighting spirit.”

The exhibit premiered at the Simon Wiesenthal Center’s Museum of Tolerance in Los Angeles in 2016 and has been traveling across the United States.

Vedem Underground: An examination of the literary magazine written by Jewish teens imprisoned at Terezin, a Nazi camp in Czechoslovakia during World War II.