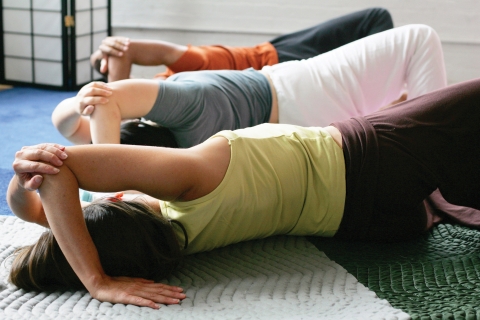 Movement has always been important to former dancer and choreographer Jacqueline Rubinstein. After she pinched a nerve in her neck, her focus shifted to movement that would alleviate rather than aggravate pain.

She discovered the Feldenkrais Method developed by Moshe Feldenkrais initially to treat his own debilitating pain from a knee injury that doctors told him was only 50% likely to respond well to surgery. After an intense study of the movement of the knee, he learned a more efficient way to walk and hold himself that enabled him to return to an active life.

He refined his method in Tel Aviv in the 1950s, and it is now widely practiced in Israel, notes Rubinstein. Rubinstein says she was attracted to a healing modality that not only worked for her but also had an approach that draws on Hassidic ideas that “blur the distinctions between healing and learning, spirit and flesh, and emotion and understanding.”

“The Feldenkrais method exploits something current research is only now confirming – that our brain is a learning system of enormous plasticity,” says Rubinstein. “Dr. Feldenkrais found that most of our physical problems, aches and pains are a result of the habits of moving that each of us had developed over the years. Under the right conditions, these habits can be changed very quickly.”

Rubinstein went on to study the method at the Feldenkrais Institute in New York City and is now a Feldenkrais practitioner in Portland.

In addition to one-day workshops (see box), Rubenstein offers six- to eight-week class series, with the next series due to start in January. The class begins with small movements and builds to full-body movements. For instance, she explains, students learn to roll from their back to side comfortably by exploring the full movement in terms of slow, small motions.

“It connects the nervous system so you can learn new, efficient movement patterns,” she says.

In the individual sessions, Rubenstein “takes over the work for the body” and introduces the brain to more efficient movements that won’t cause pain. She provides home exercises students can use between sessions to continue to sidestep habitual movements that cause pain.

“The biggest thing is it helps you to learn to be aware of your movements so you can avoid chronic pain and injury.”

Rubinstein will offer an Introduction to the Feldenkrais Method workshop at the Mittleman Jewish Community Center, Sunday, Feb. 24, 1-3 pm.

Explore sitting in all its complexity. Learn practical tips on comfortable ways of sitting, including healthy workstations and optimal chairs, and easy, effective movement exercises. (A guide for one exercise to enhance comfortable sitting is available free on the website.)

Returning to Yourself: A Movement Workshop to Ease the Stress of the Holidays
Sunday, Dec. 2, 10 am to 3 pm

The hustle and bustle of the holiday season, not to mention family stress and fried latkes, can leave a person feeling disembodied, sore, tired, cranky and in pain. Explore carefully structured movement exercises to get you into a comfortable, strong and resilient place.

Details and registration: www.feldenkraisportland.com/workshops/ or call 971-258-1885.

'Movement to ease pain' has no comments