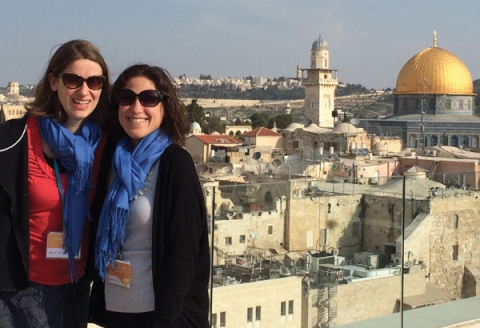 In December, 20 Portland-area Jewish moms enjoyed a free tour of Israel and came home with new connections to the land of Israel, to Jewish traditions and to the women who shared the experience.

Momentum is an eight-day journey through Israel created by the Jewish Women’s Renaissance Project in 2008. Thousands of women from 19 countries have experienced this life-changing trip, for which they pay only their own airfare and a small amount for tips etc.

The Portland moms were accompanied by Eve Levy and Meira Spivak of the Portland Kollel, which cosponsored the trip with NCSY of Portland in partnership with JWRP.

“The trip is unique because it is completely focused on the Jewish woman, mother, wife and community person,” says Eve. “The classes, activities and sites we visit are all geared to inspire and uplift the Jewish woman.”

Eve and Rabbi Gadi Levy moved to Portland just before the High Holy Days. While living in Denver for four years, Eve took more than 100 women on three JWRP trips to Israel. Before Denver the couple and their children lived in Israel.

Eve says each woman on the trips has a different experience. While the highlight of the trip is different for everyone, Eve says that many of the women tell her they enjoy “Friday night at the Kotel (the Western Wall), singing and dancing while bringing in the Shabbat together with 400 other JWRP sisters from across the United States. It is impossible to put into words the awesome experience of unity and spirituality that that was.”

She describes the entire Shabbat experience as incredible: “Shabbat in Jerusalem was off the charts – great food, classes, meeting interesting people (all the way through) Havdalah on a private rooftop in the old city overlooking the Temple Mount!”

Participants also visited the beautiful mikvah in the Tzfat, considered the center of Kabbalah and Jewish mysticism. There the women learned about the deeper mystical aspects of the women’s mitzvos. Three Portland women also received their Hebrew names in the ancient synagogue on top of Masada.

“Each woman came home with recharged batteries in their commitment to their families, to their communities and to the Jewish people,” says Levy. “I hope the ripple effects of this trip will be felt near and far.”

Participant Anna Kodesch, who has visited Israel before on missions and as a family, says the Momentum trip was an opportunity to “remind myself who I am and what I believe in.”

But she also brought a lot home. “It has brought more meaning to the things that we do in our family to celebrate our Judaism. Too often, we get caught up in the what, and not the how of the things we do; this trip gave me a chance to slow down and think about the hows for myself and how they relate to my family.”

She calls it “a wonderful opportunity to grow as a person, independent of our children, spouses, etc., and to rekindle and strengthen our connection to our Judaism and spirituality.”

While in Israel she says she had a lot of fun and connected with “some really quality people from Portland.”

One of those people is Naomi Leavitt, who calls Anna “my roommate and new best friend.”

“My roommate ended up being Anna, whom I have known since I was 8,” says Naomi. “We went to Sunday school, camp and youth group together, and now our kids are in the same bunk together at camp. The first night of our trip we were both awake at 5 am and just ended up talking as the sun rose over Tiberias for the next hour and a half about everything. We grew so close over the nine days, and we are so excited to hang out and stay in touch when we are back home. I honestly think the friendships I made were the icing on the cake.”

Going on her first organized tour, Naomi wasn’t sure she’d like having every day and every activity planned for her. But she says she soon realized that this enabled her to be totally engaged “in what I was hearing, learning, seeing and understanding. I had to let go of my life as a mom, wife, educator, queen of the house, and just be me.”

Naomi was in Israel 13 years ago during her junior year abroad, but she says this trip was a “mind-blowing experience.”

Of the women she shared the experience with, Naomi says, “We really are sisters in that we have started a journey together and are supporting one another now that we are back to the real world. I also made a bunch of connections to women in other cities and met sisters of women from Portland who live in other cities. Being Jewish really does make the world a smaller and sweeter place.”

Lara Greenberg says she was hesitant to apply for the trip because her husband, Paul Seal, is not Jewish, though she says he is very supportive of having a Jewish household. Given that support and the fact that their three children attend Portland Jewish Academy, she decided to apply.

“After filling out the online application and meeting with Eve, I was ecstatic to be selected to go on the trip,” says Lara. “Most of the other women on the trip are married to Jewish men. … I felt so comfortable talking with this group about my experience as a Jewish mother married to a non-Jew and the good and bad that goes along with it. I always felt completely supported and included.”

Noting the trip has helped her become more knowledgeable about raising Jewish children in a Jewish household, Lara says, “Thank you to everyone at the Portland Kollel and JWRP for this gift and making this possible for me and my family.”

Other Oregon moms who want to have a similar experience are invited to apply for the next women’s trip coming up Oct. 19-28. Any Jewish mom from Portland with kids still living at home can apply online at JWRP.org under The Portland Kollel October trip. The trip itself is free. The women pay for their flights to Israel, a registration fee of $36, a $50 fee that covers all tips while on the trip and a suggested donation to the Portland Kollel.

Eve says men don’t have to miss out either. A men’s mission for husbands of participants will take place in June.

“My husband, Rabbi Gadi Levy, will be leading that,” says Eve. “The impact of having wives and then husbands onboard will definitely strengthen our community.”