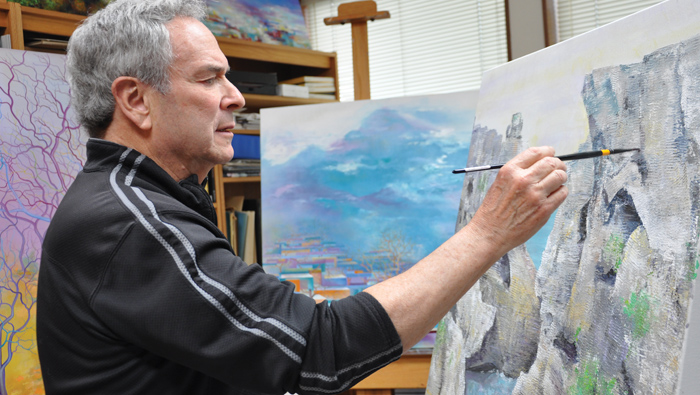 For its premier exhibit, a new art gallery in the Portland Jewish community’s “living room” will feature the diverse works of lifelong-artist Fred Harwin.

Fred is a former president of the Mittleman Jewish Community Center, whose tagline is “the living room of the Jewish community.” He’s also a painter, a published medical illustrator and the subject of an award-winning documentary entitled “Ocularist,” which reveals the meticulous process he uses to create custom ocular prosthetics (artificial eyes).

“I’m honored to help get art going again at the center,” Fred says of being asked to present the first exhibit in the new gallery.

MJCC Program Director Len Steinberg says the center is installing a professional art-hanging system, like those in museums and galleries. The 29-foot “history wall” in the J’s lobby will double as a gallery. During exhibits, a system of cables will display art in front of a shade covering the history wall display. Len says the center will avoid back-to-back art exhibits, so the wall’s 100 years of history will be visible several times throughout the year.

“(The gallery) will allow us to exhibit a wide range of artwork and attract new partnerships with artists and arts organizations,” says Len. “Our building has the opportunity to enhance public access to a broad range of visual art.”

“This project will create a new venue for art exhibitions in Portland, located in a section of the city that is largely residential and has few galleries and exhibition spaces,” says Len. He adds that the project will “enrich the lives of those who visit and make our campus a true destination for arts-related experiences.”

Fred’s show at the J’s new gallery will draw on his own diverse experiences and talents.
“My world is a visual world,” he says.

He has pursued art with a passion since beginning art lessons at the Detroit Institute of Arts with encouragement from his fourth-grade teacher. He continued those art classes into his high school years, when he studied art and architecture at Cass Technology High School. He earned a Bachelor of Fine Arts degree from Wayne State University. Then he became one of three students studying with six instructors for a Master of Science degree in medical and biological illustration at the University of Michigan.

“I wanted to observe everything. I didn’t want to work from subjectivity,” he says of his intensive observation. “I learned to express myself in something I felt I understood.”

He has put those same skills to work creating custom ocular prosthetics since 1978. Unlike many ocularists, Fred will create only a couple of artificial eyes a week. He works closely with each client to create a prosthesis that is indistinguishable from the real eye. He even developed a technique that makes the pupil appear to dilate.

“It’s not about the product, it’s about how the person feels when they leave,” says Fred. “I look at my eye work as my tikkun olam. It’s important work to help people in terms of self esteem. … This is part of our (Jewish) tradition.”

For more than a decade he has created “Eye Art” calendars featuring an image of an eye. But if you look closely at the eye, the iris is made up of related images, and the blood vessels that radiate into the whites of the eye are words related to those images. For instance, his Iris of Irises piece uses iris flowers to create the iris of the eye, and the words branching out from the iris are the names of different kinds of irises. Four of his Eye Art images will be on display at the MJCC.

Now director of the Center for Ocular Prosthetics in Portland, for the past few years Fred has been taking Wednesdays off to revisit his fine art roots and paint with oils.

“As an artist, if you don’t know the medium, the medium controls you,” says Fred. “If you understand the medium, you can use it to convey what you want.”

As he explored oils, he created a series of paintings he calls “Branches.”

“Are they tree branches or are they capillaries?” he asks. “To me it’s all the same. It’s about life. It’s bringing sustenance needed for life.”

But while tree branches and the branches of blood vessels both carry nutrients, the birds and moths that dot the dozen paintings in his Branches series point toward trees as the subject matter.

“I have to throw these little guys in,” says Fred of the hummingbirds, flickers and moths. “They may not go with what I’m doing, but … it adds an element I enjoy.”

Visitors to the MJCC will have the opportunity to decide for themselves what the Branches paintings represent. Four of the paintings will be on display at the J.

Fred also plans to share a couple of his most recent oil paintings – landscapes from recent trips. One is an image of a canyon in America’s Southwest and another is from photos he took while on a recent vacation in New Zealand.

“I always like what I’m working on at the present,” says Fred. “It’s an accumulation of everything else.”

Both of the recent paintings are from vacations with his wife, Sara Harwin, also an artist. The couple has two children: Lise Harwin, who is communications director for the Port of Portland, and Jesse Harwin, who recently married Sarah Chellis and is in a five-year apprenticeship to become a journeyman commercial electrician.

The new gallery is supported in part by a grant from the Oregon Cultural Trust. Additional support comes from the Kostiner Cultural Education Find.