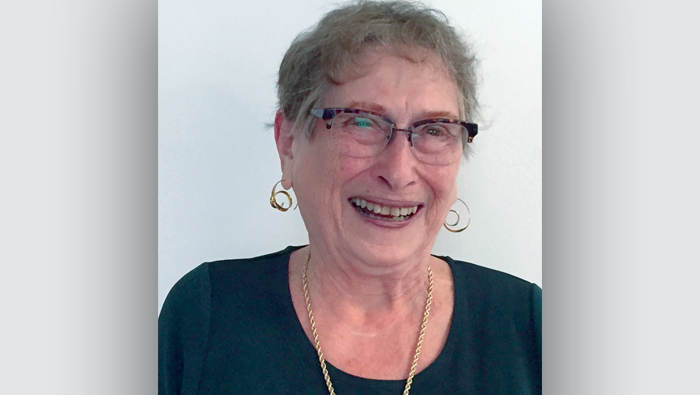 Miriam Greenstein, 86, remembers vividly the atrocities of the Holocaust. She was 15 when she was liberated from Bergen-Belsen. As a survivor, she has made it her mission to ensure nothing like that will ever happen again.

She was 9 when Germany invaded Poland, turning her life upside down.

Born to Ruth and Zalman Kominkowski, Miriam lived a happy childhood. Zalman was in the lumber and building supply business, and the family had moved four times before Miriam’s 8th birthday. The family last lived together in Lubrainec in the Polish countryside.

Everything changed on Sept. 1, 1939. Miriam remembers the day the Germans took over her town.
In the summer of 1941, Zalman was taken away to a labor camp. The last time Miriam saw her father, he was boarding a German army truck at gunpoint with all the other Jewish men from the town.

The last time she saw her mother was in Auschwitz, where the two had been taken together from the Lodz Ghetto. Miriam will never know exactly what happened to her.

Miriam was eventually moved to Bergen-Belsen, then to a slave labor camp in Magdeburg, Germany, and then back to Bergen-Belsen. She was on the brink of death, ill with typhus and TB, when liberation finally came.

She says she survived the camps out of sheer will.

“I could have easily curled up and died when I knew my mother was dead. I knew my father was murdered, I knew my grandparents had been murdered. But I made up my mind that I had to live to carry on the family name and bloodline. It’s just that simple,” she says.

After liberation, Miriam was in a Red Cross hospital then in a displaced persons camp in Sweden. She immediately sent letters to her Uncle Moniek, her mother’s brother, in Portland. She had memorized his address and knew it would be her only family contact. He had emigrated to marry an American woman he met before the war began.

She didn’t hear back from him and began to give up hope. Weeks dragged on before she finally received a telegram from him, telling her to wait for instructions.

From Portland, her uncle and his wife, who would eventually become a mother figure to Miriam, worked tirelessly to bring her to America. They pulled strings and contacted local officials after being told it could take five years because of refugee quotas.

The contacts worked. After they contacted Axel Wide, the Swedish vice counsel in Portland, he contacted his aunt and uncle in Sweden and they offered Miriam a temporary home.  The couple took care of her and accompanied her to a passenger ship in Oslo, Norway, that took her to New York City. She arrived on Nov. 26, 1945.

Her uncle and aunt had taken the train from Portland to meet her when she arrived. They spent two weeks in New York City, where her aunt took her shopping for a new wardrobe.

“She tried to make an American teenager out of me. I was skin and bones and flat-chested,” she says.

Her journey back to Portland is when she says her life truly began. She pushed her way through high school, graduating from Grant High School despite the late start, and quickly married. She immersed herself in American culture, daily life and advanced herself in every way possible.

Miriam had four daughters and sees herself as nothing but fortunate. “I grabbed life and inhaled it,” she says. “I knew I had to have children to resurrect my family.”

Except for a slight accent, Miriam says she is 100% American and proud of it. “I’ve had a fantastic life,” she says.

It wasn’t until 1988 that Miriam confronted her past. She had never spoken publicly of the horrors of her teenage years and the terrible loss of her family. Her daughters knew she was a survivor, but not from personal stories.

“My children only heard my childhood stories until age 9 in Poland,” she says. “Only after I opened up did they realize this, though.”

Miriam became motivated to share her story when a young Ethiopian man, Mulugeta Seraw, was brutally murdered in Portland by white supremacists. The horror hit home.

“I just couldn’t believe the whole thing. There were neo-Nazis around, swastikas were painted on buildings and I just thought – I have to do something,” she says.

Keeping silent was no longer an option. Miriam began speaking to groups at high schools, prisons, juvenile detention centers and different organizations about the atrocities of the Holocaust and the important message that comes with it.

She sees herself as an example of someone who took evil and turned it into good. She wants to encourage others to do so as well, especially underprivileged youth and troubled teens.

“Today I focus on prejudice, bullying, hatred – getting to know each other,” she says. “If you open their minds to how they might feel if this were happening to them, you’ve accomplished something. It might prevent one murder. It might prevent one suicide.”
After embracing her new role as a speaker, Miriam also began painting as a means of expression.

“One night, I got up. I had not painted for years. I had canvas, I had oils. I pulled them out, sat down and painted until 6 am,” Miriam says. “I had no idea just how therapeutic it would be.”

Miriam now spends most of her time dedicated to Holocaust education. She was a member of the team charged with designing Portland’s Holocaust Memorial. She authored an autobiography, In the Shadow of Death, is a board member at the Oregon Jewish Museum and Center for Holocaust Education, and is a member of the Holocaust Speaker’s Bureau.

This Yom Hashoah, Miriam will remember those who perished in the Holocaust, although that is something she says she does every day.

“If I have touched, let’s say, one in 100 people that I have spoken to, and they have changed their attitude about hatred, then I have accomplished something,” she says.

'Miriam Greenstein: A story of perseverance' has no comments