Nearly 300 people filled the Mittleman Jewish Community Center ballroom Aug. 11 to hear a moving presentation by Jona Laks, a Holocaust survivor who was subjected to human experimentation by Josef Mengele at the Auschwitz concentration camp.

Jona Laks recounted the desperate conditions her family endured in the Lodz Ghetto. She spoke of losing her parents and brothers at Chelmno extermination camp. And she recalled the horror and suffering she and her twin sister, Miriam, experienced as human guinea pigs in Mengele’s deadly medical experiments. She urged the world to remember and to keep human life sacred.

“On the Jewish calendar today is  Tisha B’Av, the Jewish National Day of Mourning which commemorates the destruction of both the first and second Temple which stood in Jerusalem and the subsequent tragedies that have befallen our people since,” said Chabad of Oregon Rabbi Motti Wilhelm in his introductory remarks.

“But today is not just one where we sit on the floor and cry,” he explained. “Rather it is a call to action. This day calls upon us to combat discrimination, bias and senseless hatred with pure, undiscriminating and uninhibited acts of love and kindness. 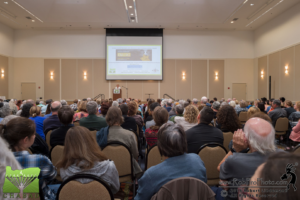 And in that spirit we look forward to hearing from Jona Laks.”

After the war Jona founded and served as chairwoman of the Organization of the Mengele Twins. In January 2015 she addressed the United Nations General Assembly at its International Day of Commemoration in Memory of the Victims of the Holocaust Memorial Ceremony. She has been featured in several documentary films.

Rabbi Wilhelm said that Jona told him that she shares her story because “the world must not forget” and we must ensure “never again.” At her presentation, the rabbi told the crowd, “We must pledge not only ‘not to forget’ but to take an active role in increasing tolerance and love.”

The Aug. 11 talk was sponsored by Chabad Center for Jewish Life-SW Portland in partnership with Mittleman Jewish Community Center and the Oregon Jewish Museum and Center for Holocaust Education.