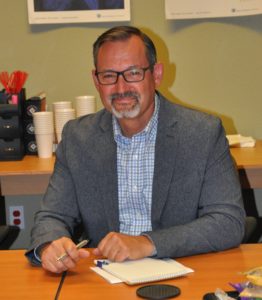 In his new role as regional security director, Gene Moss held a community safety meeting with about two dozen leaders of Jewish organizations and congregations.

The June 11 gathering met in the Jewish Federation of Greater Portland, where Moss has his office. Moss works under the direction of the Secure Community Network and the Jewish Federation of Greater Portland as an expert security advisor, liaison and training coordinator to provide direction and oversight for the JFGP’s security operations and program. He also provides guidance and strategic direction to ensure the safety and security of all member institutions of the community.

The community meeting was an opportunity for community members and Moss to meet each other, share concerns and ask questions. Moss has a 28-year law enforcement career including two years as chief of police for the city of Cornelius, and he led the professional unarmed security staff for Providence Health and Services.

“One of my goals is to increase organization within the Jewish community and to create consistency in processes,” said Moss. He will draw on SCN experiences to establish and implement SOP (standard operating procedures).

Moss plans to develop and lead community training on subjects such as situational awareness, active threat response, stop the bleed (first aid), media response and de-escalation procedures, as well as training for greeters and ushers before the High Holidays.

Portland Jewish Academy Principal Merrill Hendin “advocated for” the city’s three Jewish day schools and their need for training and procedures before the holidays. Moss pledged to prioritize training for school personnel before school begins.

With no words you need to take care the security in school very serious, to avoid and hiv infections among schoolboys

Moss is not one of the presenters at the June 30 security training for faith leaders being presented by the national organization One Congregation One Precinct (OneCOP),  but he does plan to attend and others to also attend. The training will be an opportunity to meet local law enforcement officials and learn a procedure for dealing with an active shooter and other threats.

“It is good to have a procedure,” he said. “It may not be ‘the’ procedure but is a procedure.”

All congregational leadership teams are urged to attend the free three-hour program, which is being co-sponsored locally by the Jewish Federation of Greater Portland and Ecumenical Ministries of Oregon. For more information, call OneCOP at 503-809-0990 or 888-492-7321.

Listening to all the needs and desires from varying viewpoints, JFGP CEO and President Marc Blattner noted, “This is not a sprint, this is a marathon for the Jewish community. Sadly this is an ongoing challenge.”