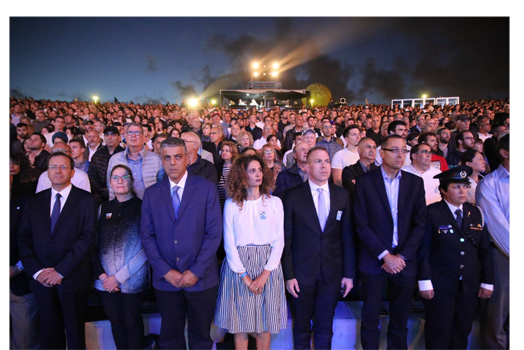 On the eve of Yom Hazikaron, a day of remembrance in Israel for fallen soldiers and victims of terror, Masa Israel Journey hosted a memorial ceremony in Latrun. This was the only English-language ceremony in Israel and was broadcast to thousands of Jews in communities and schools in the United States, Canada, South Africa, Uraguay, Ukraine, France, Germany, Australia and England, as well as on Masa’s Facebook page. It was also translated into French, Spanish and Russian.

Past Masa participants have described the organization’s Yom Hazikaron ceremony as one of the most impactful and profound experiences during their time in Israel.

This year, the stories of Alejandro Hoffman, Sean Carmeli, Jordan Ben Simon and others who were killed while in the IDF or in a terror attacks, were highlighted through videos and anecdotes from their families and friends. IDF Captain Yair Alkalai also spoke.

Gilad Erdan, Israel’s Minister of Public Security and Strategic Affairs and Minister of Information said: “In an age where terror targets our homes and synagogues, and when we face new and old forms of anti-Semitism on the streets and on campuses, the home front has become the front line, and we stand on that line together. We are always and forever committed to the core Jewish principle, ‘kol Yisrael aravim ze la ze’ (we are all responsible for one another). And we have a special responsibility to our missing and captive soldiers. Just as we never rested, for thirty-seven years, until we brought Zecharaya Baumel, z”l, home, we will never rest until we bring Hadar Goldin, Oron Shaul, and all of our missing and captive soldiers and civilians home. I believe this is our highest moral duty and a sacred oath we take to our soldiers and their families. To our enemies I say, the long arm of the IDF and security forces will reach you anywhere and everywhere, on our borders and far beyond them. We are watching you and we will act forcefully to defend ourselves against any threat.”

“The longing for those who’ve been taken from us far too soon, for their smile, their laughter, their embrace. These are the fragments of memory that can never be put back together. We long for our loved ones who fell in battle, and for those who were the victims of terror and anti- Semitic hate, In Israel, San Diego, Pittsburgh, Paris and around the world,” Said Isaac (Bougie) Herzog, Chairman of the Jewish Agency and Masa’s honorable guest at the Latrun Ceremony. “We can never put the fragments back together, but we can renew our resolve to cherish their memory and honor their legacy.”

“This ceremony allows the young Diaspora to be true partners on a day that has tremendous weight in the life of Israeli society. The ceremony has become an important way for Diaspora Jews to mourn the loss of soldiers and victims of terror alongside Israelis,” said Masa Israel Journey CEO Liran Avisar Ben-Horin.

“Masa brings thousands of participants from dozens of countries all over the world to experience the Israeli reality during the impactful times of Yom Hazikaron, and Yom HaShoah (Holocaust Remembrance Day) and Yom Ha’atzmaut (Israel Independence Day). These events continue to strengthen the connection of the Diaspora with the State of Israel.”

About Masa Israel Journey: Masa Israel Journey is the largest immersive, long-term educational experience in Israel for young adults ages 18-30. On its programs that range from two-months to a year, Masa offers an authentic, unmediated and challenging journey into Israeli society, culture, politics and history – and acts as the largest pipeline for the Jewish diaspora to access the finest Israeli businesses, social enterprises and academic institutions. Since its 2004 founding by the Israeli Prime Minister’s Office and The Jewish Agency, Masa has served over 150,000 young people from more than 60 countries.