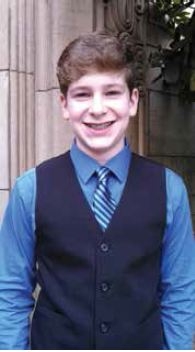 A Portland teen’s d’var Torah on marriage freedom has gone viral, getting more than 100,000 hits in its first two weeks online.

Duncan McAlpine Sennett, who became a bar mitzvah at Congregation Beth Israel on Nov. 9, delivered his d’var Torah about parashat Vayetzei, which details Jacob’s marriage to Leah and Rachel. Duncan notes that gay marriage opponents frequently say their opposition is based on the biblical definition of marriage as the union between one man and one woman. Yet in Duncan’s Torah portion, Jacob marries two women.

In his d’var Torah, Duncan supports the freedom for everyone to marry the person they love. After Oregon United for Marriage approached Duncan about sharing his d’var with mainstream social media, Beth Israel posted the video Nov. 26 on YouTube (visit www.youtube.com and search for “Duncan bar mitzvah”). In just two weeks, the video had more than 100,000 hits and the story had appeared on state, national and Israeli media sites. It also landed Duncan an invitation to speak at the Union for Reform Judaism Biennial held in California in mid-December.

Duncan is amazed and absolutely thrilled at the reception his d’var received. He’s excited to be working with the Oregon United for Marriage Campaign and hopes his speech helps to promote marriage equality in Oregon. “I really like activist work,” he says. “Maybe that’s what I want to do when I grow up!”