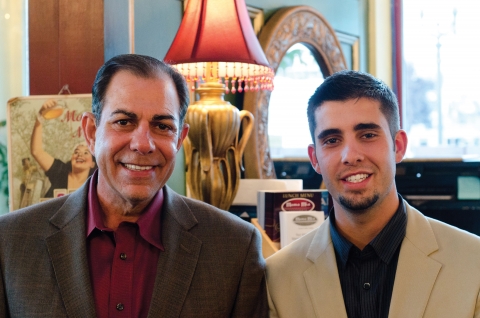 Walking into Mama Mia Trattoria, customers are immediately transported into the Old World. Sparkling chandeliers hang from the ceiling, flasks of extra-virgin olive oil grace the marble tables and the aroma of simmering meatballs fills the air. Restaurateur Barry Brown, who owns and manages the restaurant with his son Jared, has modeled it after classic New York trattorias like the legendary Mamma Leone’s.

The fourth generation of a family of restaurateurs, Brown got his start in the industry at the age of 13. He worked in his family’s first restaurant in the United States, a Jewish-style eatery in Pittsburgh. To this day, he continues to find many commonalities between Jewish and Italian cuisines.

“Preparing meals from scratch … that is where Jewish and Italian cuisines are so very similar. At Mama Mia Trattoria, we make 100 percent of our desserts. We make the tiramisu, the panna cotta and the shells for the cannoli, which we fill to order. When my family got started, we had to make our own pickles and bread. We had to slice the bread ourselves, because there weren’t any electric slicers at that time. Italians have done the same thing, in my opinion.”

Brown is excited about collaborating with Jared at Mama Mia Trattoria. “I have nachas. I’m so proud to work with my son; he’s got an uncanny ability to understand the commitment of our industry. In a very short time, he’s become completely proficient in all areas of the restaurant.” Not only can Jared expertly stretch and shape a ball of fresh mozzarella, but he is a particularly talented barista.

Mama Mia is the 45th restaurant Brown has managed. He attributes the restaurant’s success to its bold flavors, emphasis on premium ingredients, and unusually comprehensive menu. Executive Chef Dan Frosaker does not stint on fresh oregano and basil (the restaurant sources its herbs from West Linn’s Plants Beautiful). He is also not afraid to use the assertive flavors of garlic and Pecorino Romano cheese.

The restaurant’s table cheese, which is freshly grated every day, is an expensive Pecorino Romano from Sardegna, Italy. “It took us almost two months to source it. We now grate 300 pounds of it per month,” says Brown. Something else that makes Mama Mia Trattoria unique is its fresh mozzarella, which is made from scratch every morning. The buttery, silky cheese figures into popular dishes such as caprese salad, pizza and the restaurant’s 10 rotating varieties of lasagna.

One dish that is particularly beloved by customers is “Grandma Mary’s Sunday gravy.” Penne pasta is tossed with a delicious sauce of slowly simmered Painted Hills beef, Roma tomatoes and house-made sausage. Other customer favorites include fettuccine Alfredo and spaghetti and meatballs.

Diners who avoid non-kosher ingredients like shellfish and pork can eat at least 90 percent of the menu, according to Brown. Since all dishes are made to order, it is easy for the chefs to omit certain foods. “We don’t have to add the sausage,” adds Brown. Vegetarians can enjoy dishes like pasta filetto di pomodoro, Grandma Ciminello’s ravioli and potato gnocchi. There is also a substantial gluten-free menu.

When asked why Mama Mia’s menu is so extensive, Brown explains, “Our menu is incredibly large so that we can encompass all the regions of classical Italian cuisine.” He recommends that new customers order their favorite childhood dish. “If you come in and you want veal or chicken Milanese, you can just reach back into your childhood and try it here.”

Always looking for ways to better serve its customers, Mama Mia Trattoria is now offering online ordering and an email rewards program. The restaurant’s efforts appear to be paying off, as customer growth has been steady over the past year.

Says Brown, “Both Jared and I are totally focused on making Mama Mia the best Italian restaurant in the Northwest.”

'Mama Mia!' has no comments