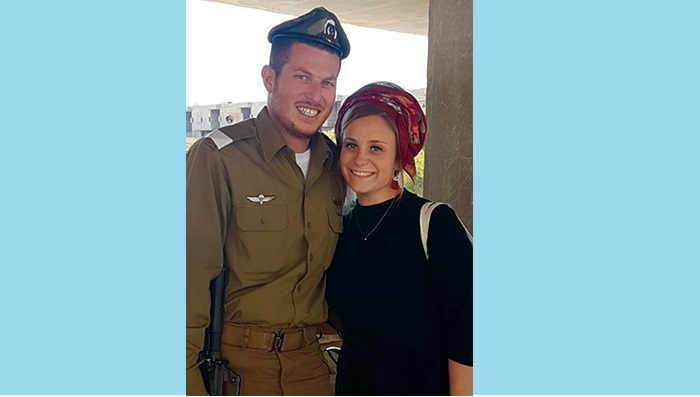 Chanukah, with its fighting Maccabean spirit, took on personal meaning for the Weinberger family recently.
On Oct. 25, nine of us headed down to Mizpeh Ramon to see Elie graduate from Officers Course. Nathan and Ruthie took a train from Tel Aviv to Be’er Sheva, and Sarah and I picked them up en route from Givat Ze’ev. Elie’s wife, Hadar, and her parents, Rivka and David, drove in one car from Jerusalem and Rebecca and Ezra in another. Given that Israelis are often blasé about graduations (many students do not attend their own university graduations), and given that a 2.5-hour drive is considered quite lengthy for our small country, this effort says a lot about the place of the Israel Defense Forces in Israeli society.
We had some time before the ceremony, so Elie showed us around the base. The facilities are quite impressive: besides the classrooms, dining halls and dormitories, there is a swimming pool, running track, tennis court, basketball court, a beautiful synagogue designed to suggest the “burning bush,” and a large building housing a gym with rooms for free weights, aerobic machines and spinning bicycles (Hadar was noticeably relieved to hear that Elie did not avail himself of the coed spinning classes).
During our walk we bumped into Elie’s course commander, Itay, who looked to be about Elie’s age (23), and Elie later confirmed this. With his fellow cadets as young as 19, Elie, who studied in a yeshiva for over two-and-a-half years before enlisting, was kind of a senior citizen. We shook hands with Itay and asked him how Elie did in the course. Itay said: “The truth? He was terrible.” We all laughed.
We took our seats and awaited the start of the ceremony, which did not begin promptly at 16:00. The ceremony took place on the base’s huge parade grounds, so huge in fact that it dwarfed the approximately 600 cadets (about 10% of them women) who were about to become officers. A small marching band stepped its way to a corner of the grounds, from where it played military and Zionist songs; a color guard brought in various flags, and a number of military bigwigs marched in along with Israel’s defense minister.
Even had we had the foresight to bring binoculars, I doubt that we would have been able to see Elie, who was with the largest contingent of cadets (the ground troops) and was standing many rows in. But then something happened. Something uncanny that moved Sarah and me to our very core. The announcer started reading off the list of outstanding cadets. I thought to myself: could it be? And then the announcer was saying “El,” and then that turned into “Eliyahu” and then “Eliyahu Weinberger from Givat Zee’v,” and there was Elie running to the front to join the row of outstanding cadets. We all jumped up and screamed like crazy. I felt flushed, and hot, and dizzy with amazement. Sarah started to cry. The son of a gun had utterly surprised us (we found out later that he had known for a week).
The defense minister personally cut the white ribbon covering the outstanding cadets’ officer’s bars. The base commander (we heard later), who was right behind, asked Elie if there was someone special for him in the crowd, no doubt expecting Elie to say “Mom” or “Grandma.” I imagine very few have answered as Elie did, “Yes, my wife.”
Elie’s name was called out one more time. At the end of the ceremony the soldiers paraded off, led by the outstanding cadets. As Elie’s group marched by, the announcer noted that it was led by “Lieutenant Eliyahu Weinberger.”
In a country that is technically at war with several of its neighbors, where there is a mandatory draft and where Memorial Day is a somber national holiday with military cemeteries full of visitors, to have your son become an officer is a source of tremendous pride, all the more so if he will be an officer in an elite combat unit as Elie will be. To have your son be named an outstanding graduate of his Officers Course feels like the entire country has proclaimed your son to be a hero, and it also feels like the entire country gave Sarah and me a massive bear hug saying: you did good.
Elie received the soldiers he will be commanding a few weeks ago at a base in the Jordan Valley. I know and the country knows they are in good hands.
Teddy Weinberger, Ph.D., writes from Givat Ze’ev, a suburb of Jerusalem. He and his wife, Sarah Jane Ross, made aliyah in 1997 with their five children. Teddy is director of development for Meaningful, a company that works with Israeli nonprofit organizations.