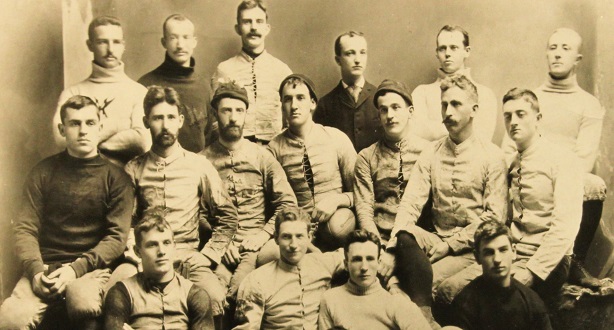 PHOTO: Will Lipman, standing right, was a member of the 1891 MAC football team. Team photos courtesy of the MAC archives.

The Multnomah Athletic Club (the MAC) is a private athletic club in Portland founded in 1891. Contrary to a common misconception that membership was restricted for Jewish applicants until the late-1950s, nine of the 26 founders of the MAC were Jewish. 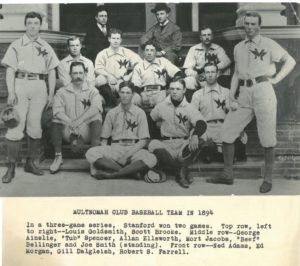 These early MAC members were, for the most part, the young adult sons of established German Jewish Portland businessmen. Their fathers were merchants (Lipman, Wolfe & Co), jeweler (Friedlander), wholesale grocer (Lang & Co), and merchant- politicians (Goldsmith and Wasserman were both Portland mayors in the early 1870s).

Moses Kline was the exception. Kline’s parents were born in Russia and he grew up in Corvallis where his father had a dry goods store. Kline was sent to Portland at the age of 14 to attend a private boarding school.

In the late 1880s, the idea of competitive amateur sports was becoming more popular throughout the United States. Football, baseball, track and field, cricket and bicycle races were gaining in popularity. The purpose of the MAC founders was to form an amateur athletic association in Portland to field sports teams that could compete against club teams in Seattle, San Francisco and Spokane. The Multnomah Amateur Athletic Club teams (amateur was dropped from the name in 1936) also played against collegiate teams until the 1920s.

Of the 26 MAC founders, 17 were football players. According to the Legacy of the Twenty- Six, Will Lipman was a leader of these football players who first met in 1890 to discuss how football would be played in Portland. The style of play was changing from a rugby-style to the “American” gridiron style. The popularity of football for amateur athletic clubs led the MAC club to lease pastureland in Tanner Creek Gulch (Goose Hollow) for their own playing field. A 3,000-seat grandstand was built in the northwest corner of Multnomah Field and a training house in the southwest corner. The first football game at this field was played Jan. 1, 1894, against Stanford launching a 25-year rivalry.

When a much larger stadium was built in 1926, Jewish merchant Charles F. Berg was a member of the MAC Stadium Executive Committee. Multnomah Stadium was sold to the city in 1966 and renamed Civic Stadium (now Providence Park). 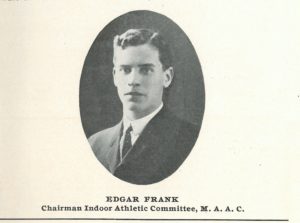 Edgar Frank was an early Jewish leader at the MAC Club. Edgar’s father, Emil, was the first Frank partner to join Aaron Meier in 1872 to establish the Meier & Frank department store.  At the 1905 Lewis and Clark Games, son Edgar won the West Coast wrestling championship. Edgar is credited with establishing the wrestling program at OSU. In 1907 at age 22, Edgar became the youngest MAC board member, serving until 1915. When his unexpected death was announced in the March 1917 Oregonian, the headline read “Multnomah Club Members Especially Mourn Loss of Young Athlete.”

Portland Jewish architect Edgar Lazarus was also an early MAC member, becoming a member in 1901. Lazarus, the descendant of Sephardic Colonial Jews in South Carolina, moved to Portland in 1890. Over his 45-year career, he designed civic projects and residences including Bernard Goldsmith’s house. Lazarus’ best known project is the Vista House on Crown Point in the Columbia River Gorge.

Several of these young Jewish MAC founders also belonged to a social club called The Concordia Club. Although the club’s name does not sound Jewish, chapters of the Concordia Club were established around the United States in the late 1800s for Jewish businessmen. Concordia Clubs were the Jewish equivalent to private social clubs like the Arlington Club in Portland. In 1912, a group of Concordia Club members purchased 100 acres along the Tualatin River to establish the Tualatin Country Club.