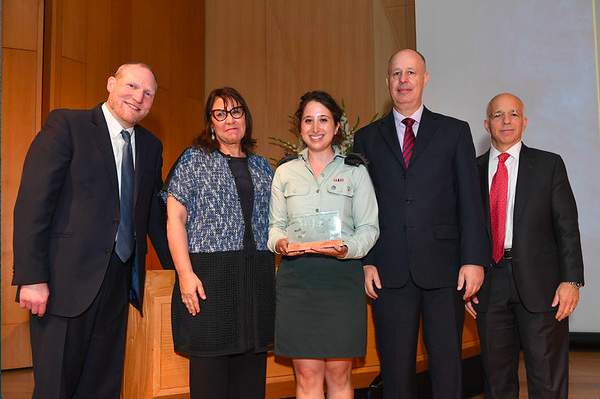 Portland native Libby Weiss received the 2017 Sylvan Adams Nefesh B’Nefesh Bonei Zion Prize June 26. The Bonei Zion Award recognizes immigrants that have made an extraordinary impact on the state and on Israeli society.

“It’s a huge honor for me to win this award, to be honest I’m almost a little overwhelmed by it,” said Libby after the ceremony. “To be able to share the stage and this award with so many Olim (immigrants) that have done so many wonderful things, I’m very appreciative of the recognition. I really didn’t expect this when I moved to Israel – I just wanted to be here and to try and follow my passion, my calling. This is beyond my wildest dreams.”

Libby was featured on the cover of Oregon Jewish Life in December 2016 (orjewishlife.com/captain-libby-weiss-brings-israels-realities-alive-for-americans/). She graduated from middle school at Portland Jewish Academy. She was drafted into the Israel Defence Force’s Spokesperson Unit in 2011 and is currently a Captain who serves as the Head of the Social Media Department.

A press release announcing the award notes: “Her exceptional leadership and excellence in her field is deserving of this award.”

This year’s prizes are sponsored by Sylvan Adams and was awarded at an official ceremony in the Knesset on June 26. Adams, a recent Nefesh B’Nefesh Oleh and Canadian real estate developer, is committed to developing the State of Israel and is dedicated to showcasing the impact and achievement of Israelis to the world, viewing the Bonei Zion Prize as an integral piece of this mission. Hundreds of Olim from English-speaking countries – including Australia, Canada, New Zealand, South Africa, UK, and USA – were nominated for the award.