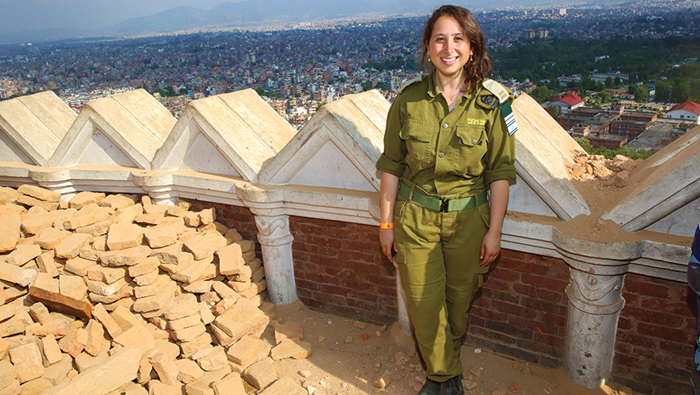 More than 2,100 years ago, the Maccabees rose up against the Seleucid Greek government that had desecrated the Temple and suppressed Jewish worship. A one-day supply of holy oil miraculously burned for eight days when the victorious Maccabees rededicated the Temple, which stood until the Romans invaded Jerusalem in 70 CE.

Just as those ancient Maccabees strove to ensure that the Jewish people could live freely in the land of Israel, soldiers in the Israel Defense Forces today safeguard the Jewish homeland. Oregonians are among those who have played a role shaping the evolution of Israel.

Capt. Libby Weiss, 28, is doing the job it seems she was born for – head of the North American Media Department in the Israel Defense Forces.

She understands intimately life in both the United States and Israel, which gives her the perfect perspective to enhance international understanding. “Democracy, equality, freedom of expression and religion, and the desire to live peacefully are of the utmost importance to both societies, and it’s an honor to help strengthen this connection by giving the American public insight into our reality,” says Libby. “Promoting understanding of the IDF, the actions we take and the challenges we face undoubtedly strengthen Israel.”

The child of Israeli parents and the grandchild of Holocaust survivors, Libby was born and raised in Portland. “I was fortunate to grow up in that calm, peaceful, stable reality,” she says.

But that sense of stability was tempered by her knowledge of her family’s less peaceful history. Her mother, Chana, was born in Israel to Holocaust survivors who came to Israel out of a displaced persons camp after World War II. The family later moved to Montreal to join an uncle living in Canada. Libby’s father, Jonathan, was born in Israel after his parents fled the rise of the Nazis to arrive in pre-state Israel just before war broke out in Europe. After serving in the IDF during the 1967 war, Jonathan wanted to study abroad and enrolled in McGill University in Montreal. The couple met there, married and moved to the United States in 1978, moving to Portland in 1987, several months before Libby’s birth.

“My dad’s side came to Palestine at the outset of the war; my mother’s parents survived the war in Europe; both those stories play a big role in my life here (in Israel),” says Libby.

“It’s fortunate in America people don’t need to understand what we go through here,” she adds. “Here we can stand on virtually any border in Israel and view an incredibly hostile country that borders us. That’s certainly different from the reality in the U.S.”

Though terror is part of everyday reality in Israel, Libby says Israelis “know how to live happily and how to enjoy life.”

Those seemingly contradictory facts are the two things that most surprise visitors from America.

“A wonderful part of my work is I get to brief groups of people from the U.S., from students to senators and all in between,” she says. “I like to bring groups to stand on the border with Gaza or Syria. When they see the geographic proximity, it very much surprises visitors. People are also surprised how much Israelis value life. We are tough when necessary, but we really live and don’t let terrorism paralyze us.”

As head of the North American Media Department in the IDF, Libby is a spokesperson on all routine and operational issues related to the IDF; she develops and implements a media strategy for the IDF; she coordinates work with the Public Affairs departments of the U.S. Armed Forces; and she manages a team of six soldiers.

“Openness, transparency and accountability are critical for us and part of the responsibility we have as a military with mandatory service, which plays such an important role in Israeli society,” she says.

Her days are diverse and range from coping with extremely challenging issues such as the death of a soldier or a terror attack to the extremely uplifting experiences of seeing the IDF use its hard-won expertise in disaster relief to help other nations.

Libby was part of the IDF delegation to the Philippines after the typhoon in 2013 and to Nepal following the earthquake in 2015. The IDF sends medical teams and search and rescue teams to aid nations in the immediate aftermath of natural disasters.

“We have decades of experience in providing world-class humanitarian care following natural disasters,” she says. “These experiences were eye-opening for me. It was nothing short of miraculous to see how, amongst total rubble, the IDF was able to establish a field hospital complete with operating rooms and birthing suites to help in these scenarios.”

While in the Philippines she became friends with the parents of the first baby delivered by the IDF medical staff. The parents named the baby Israel, and Libby enjoys following the boy and
family on Facebook.

“It’s incredibly rewarding to see these glimmers of hope and happiness in horrific situations,” she says. “Life goes on.”

She has two small handmade flags she received from children in Nepal and the Philippines. A Philippine school, which the IDF helped rebuild after the typhoon, held a reception for the soldiers and presented them with flags made by the children. Though it was difficult to bring home keepsakes, given she had to fit everything into a military backpack, Libby had no intention of leaving the flag behind. In Nepal she was also handed a small flag in thanks.

On especially difficult days at work, she looks at those flags and remembers how good it felt to help the people of those nations.

Among the difficult days she recalls were those during Operation Protective Edge in 2014, when Israel launched a ground invasion into Gaza to curtail the daily rain of rockets launched from that Palestinian area onto Israeli civilian targets.

Told of the ground invasion set to begin the next day, but unable to discuss it in advance, she hurried home to wash her uniform and do other chores that she knew would remain undone in coming days.

“I knew tomorrow’s reality was going to be completely different,” she says. “I saw people my age and knew many would be called up. I saw parents and thought, ‘You won’t sleep over the next days.’ It shows the weight of this kind of work.”

She considers herself very fortunate to be able to call both Portland and Israel home. She tries to visit her family here once a year. Her parents and older sister, Tammy, live in Portland. Her older brother, Gil Weiss, is an ob/gyn in Chicago.

Her parents visit her in Israel every year, spending summers with family there. It’s a tradition that has continued since Libby was young.

“Israel was always a large part of my life,” says Libby. “Some of my fondest memories are the summers I spent with my family in Israel exploring the country from north to south, and the semester I spent in Israel during high school. The older I got, the more my connection to Israel developed – my family connection, personal history, culture, religion.”

Her Judaism was also nurtured by Portland’s Jewish community. She attended preschool at the Mittleman Jewish Community Center and attended Portland Jewish Academy from kindergarten through eighth grade. Following graduation from Lake Oswego High School, she earned a BA in political science from Northwestern University. She is scheduled to complete her MBA in July 2017, studying at the Kellogg School of Business’s Tel Aviv campus at Tel Aviv University.

Chana enjoys seeing her daughter on television. She is especially proud of a segment still found on the internet of a tour Libby gave Fox journalist Sean Hannity (http://video.foxnews.com/v/3713313689001/exclusive-sean-hannity-tours-the-hamas-tunnels/). Libby took the journalist through a Hamas tunnel and explained the threat posed by the Hamas network of tunnels that enabled terrorists to bomb and kidnap Israelis.

“She is an American girl speaking to Americans,” says Chana. “And she always mentions she grew up in Lake Oswego and was raised to be a Zionist. She is very proud of her background.”
Libby moved to Israel in August 2010.

“After graduation, I decided to come to Israel for a year, before resuming ‘regular’ life in the States,” says Libby.

During that year she interned at the Economic Ministry and “fell in love with my life here in Israel.”
After deciding to stay in Israel, she wanted to “fulfill my responsibility and serve in the IDF, as all my Israeli peers and (my) father did.”

Being a woman in the military in Israel is a wonderful experience, she says. “Nearly all of the positions in the military are open to women; very few are not. Women are fighter pilots and infantry combat soldiers. … Personally, as a female officer, I’ve never felt my gender has been an issue in any capacity.”

She has served in the IDF Spokesperson’s Unit since she was drafted in November 2011. She was selected for IDF Officer Command Training in 2013 and has been the Head of the North American Media Department since 2014.

“After living in Israel for more than six years, I feel so fortunate to call both the U.S. and Israel my home,” she says. “We face many of the same challenges, but more importantly, we value the same things and I’m lucky to witness that on a daily basis.”