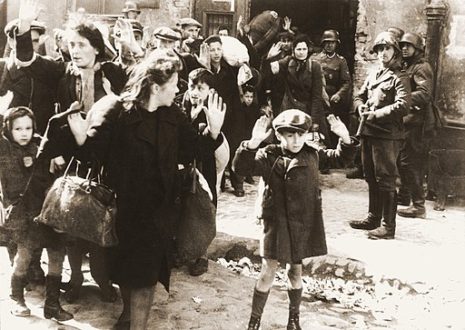 IMAGE: Polish Jews captured by Germans during the suppression of the Warsaw Ghetto Uprising (Poland). Photo courtesy of Wikimedia Commons

Emanuel Ringelblum, 1900-1944, was a scholar, a teacher and a social worker in Warsaw, Poland. He and his family were confined to the Warsaw Ghetto following the Nazi invasion of Poland. Devoted not only to his people but to the Yiddish language, he chronicled the fate of the Jews in the ghetto, particularly during the period of deportation (July-September 1942) as well as the first gassings at the death camp in Chelmno. This information was passed to the Polish Underground, which forwarded it to the Polish Government in Exile in London; thus word of Nazi atrocities was carried to the outside world.

As a historian, Ringelblum kept a record of the daily life in the ghetto and was instrumental in organizing as much communal and educational programing, especially for children, as was possible. His records were hidden in milk cans and metal boxes and buried under buildings before the destruction of the ghetto. He hoped the historical archive would survive to show the brutality of the Nazis and the strength of the Jewish people. Two sections of the archive were recovered in 1946 and 1950. A third section has never been recovered.

In March 1943, Ringelblum and his family were smuggled out of the ghetto and lived on the “Aryan” side of Warsaw. He returned, by himself, to the ghetto to participate in the uprising and its ultimate destruction in April 1943. He was captured, sent to a labor camp, smuggled out and returned to Warsaw and his family, who were still in hiding. In March 1944, the Ringelblum family’s location was betrayed. They were arrested by the Nazis and ultimately executed in Pawiak prison.

Following is part of a letter Ringelblum wrote March 1, 1944, to YIVO (Yiddish Scientific Institute) and the Yiddish Pen-Club. In Poland the principal language of the Jewish community was Yiddish. In this letter he describes the spiritual resistance in the Warsaw Ghetto.

The watchword of Jewish social activism was “life with honor and death with honor.” An example of this was the cultural work that had developed, despite the terror, the hunger and the need which grew until the martyr’s death of Polish Jewry.

There developed an underground cultural organization with the name “ICOR” (Yiddish Culture-Organization). It organized cycles of educational lectures, anniversary celebrations (honoring Peretz, Sholem Aleichem, Mendele, Borochov and others) and literary and artistic performances.

Under the concealment of children’s kitchens and homes administered by “Centos” (Central aid for children and orphans) a network of underground schools of various political persuasions was created.

A conspiratorial central Yiddish archive was created under the innocent name of “Oneg Shabbos.”

A lively underground cultural work program was run by almost all of the parties and ideological organizations, particularly the youth organizations. Through almost the entire time the ghetto existed, there was an underground press and magazines were published, as were books.

With the help of a staff of teachers, educators and artists, hundreds of performances for children were organized and took place in dormitories and clubs where the children lived and slept. There was also a central library organized for children, a theater and courses in the Yiddish language and literature.

Even in the concentration camps where the SS sent a number of Jews from Warsaw and other cities, our social and cultural activities did not cease. It was not breached nor did it stop serving the community. While in Panytov and Trovniki as well as other camps there rose a conspiratorial society of self-help. From time to time there were even secret performances and celebrations, etc. The flow of social and cultural work continued for as long as there was a pulse in the Jewish collective society. You should know that the last activists that remained alive, remained true, to the very end, to the ideals of our culture.

Author and Yiddish scholar Leon Gildin provided this English translation of the Yiddish letter, which appeared in the 2018 Summer-Fall Edition of the magazine Afn Shvel, published by the League for Yiddish, New York, NY.