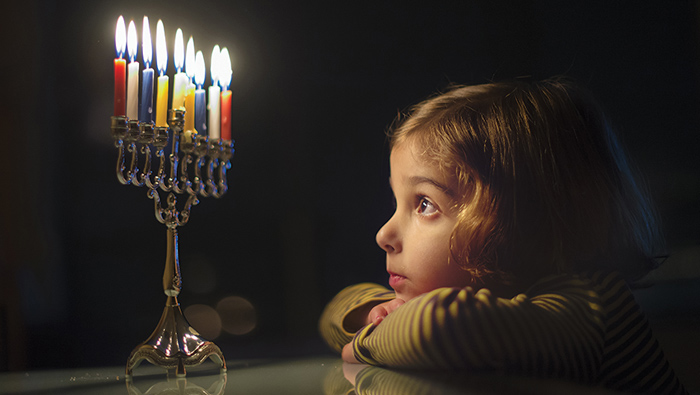 The following is my free translation based on the work of my friend and teacher, Rabbi Lior Engelman.

When we were children it was clear which of the Hanukkah candles was the most important: the shamash, the “helper” candle. It is the most prominent and tallest candle – it is one of a kind. The shamash is the leader of the pack, the only one that can light the rest. In advance of the Hanukkah plays in preschool, everyone wanted to be the shamash, and the child who landed the part was happy indeed.

Adults, too, are very impressed by the shamash. We similarly want to lead by standing out. And if we can’t lead, we often make do with getting close to the local shamash and serving him. However, anyone who has learned some of the basic laws of Hanukkah discovers something unusual: The tradition puts the focus on the regular candles and not on the shamash. Precisely, the regular candles tell the miraculous story of Hanukkah: the victory of the Maccabees and the solitary flask of olive oil that sufficed until the rededication of the Temple. The regular candles are so precious to us that we do not wish to benefit from them for profane purposes; as it says in the liturgy: “And no one may use them except to look at them, and to be reminded to thank and praise Your great name for all your miraculous rescues.”

The truth is that the shamash plays a negligible part in the Hanukkah story. It is designed to allow us to go about our lives in proximity to the Hanukkah lights – using its light and not theirs. The shamash stands out; he is impressive, he is exceptional, but on Hanukkah we are most impressed by those who are not out of the ordinary, who are part of the group. Yes, the shamash is in charge of lighting the other candles; he is responsible for the lighting, he is the leader, but his very name literally teaches him how our sages felt a leader should view himself. A leader is a shamash, an attendant, a servant. His job is to serve others. He is not valuable in himself, and the public is not supposed to worship him. It is likely that he has special abilities, which God gave him to a wonderful degree, but all this in the hands of an authentic leader turns into a tool to serve the public and not, God forbid, as a tool for the cult of his personality.

When Rabbi Gamliel, president of the Great Sanhedrin in Jerusalem in the first century, wanted to appoint two of his sages to leadership positions, they refused out of modesty. In response he said to them: “Do you think I am giving you a sinecure? I am putting you to work.” Leadership in Israel means work. Rav Kook referred to himself as “a servant of a holy people in the Holy Land.”

We are all leaders in certain aspects of our lives: parents, teachers, people in important positions at work and really everyone who has an influence over the fate of another person. We need to remember that the big light that stands out, the special one, the one we so much loved in our childhood, is ultimately just a shamash. If the shamash is filled with self-pride and thinks that his light is the most important light, he has failed in his role. If he is a humble shamash, then all the candles around him will blaze joyously with a grand light.