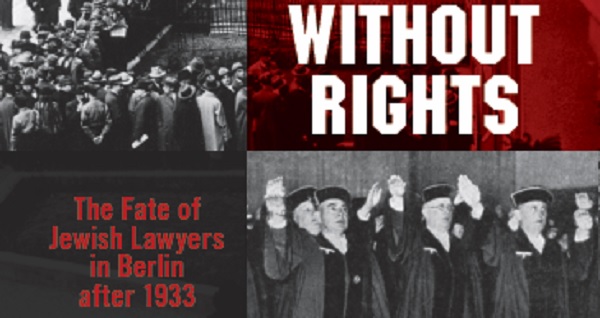 This week is the 80th anniversary of Kristallnacht, a two-day Nazi-sanctioned riot against Jews in Germany and Austria.

On Nov. 7 at a Jewish ceremony was held at a Jewish school in Berlin marked the anniversary with lighting of Yahrzeit candles. At that event Rabbi Yehuda Teichtal said that the answer to “the evil of the past is to create education for the present and the future.” He cited the attack in Pittsburgh as evidence that “the ugly head of anti-Semitism can show itself anywhere in the world.”

To mark the anniversary, the American Bar Association has released a historical and timely rule-of-law book that details how one government – Nazi Germany – systematically undermined fair and just law through humiliation, degradation and legislation leading to expulsion of Jewish lawyers and jurists from the legal profession. 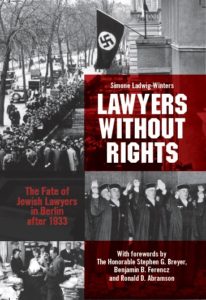 As the rule of law comes under attack today in both developed and Third World countries, Lawyers Without Rights: The Fate of Jewish Lawyers in Berlin after 1933 tragically details what can happen when the just rule of law disappears — and is replaced by an arbitrary rule by law that sweeps aside the rights and dignity of selected populations. First published in German two decades ago and updated in 2007, the book includes three significant additions — forewords from Justice Stephen G. Breyer of the U.S. Supreme Court; Benjamin B. Ferencz, at 99 years old the sole-surviving prosecutor from the Nuremberg trials; and Ronald D. Abramson, a Jewish lawyer and philanthropist whose family foundation, the Anne and Ronald Abramson Family Foundation, provided underwriting for this book.

Justice Breyer writes, “This book, Lawyers Without Rights: The Fate of Jewish Lawyers in Berlin after 1933, helps us recollect. It recounts the early days of the Holocaust from the perspective of the law and Jewish lawyers in Germany, and Berlin specifically. It is important that we and future generations remember the misuse of laws in Germany and how it permitted a society to effectively purge a significant group of lawyers solely because of their religion, sending many in exile or to their deaths. It is about the misuse of law.”

The English translation of this book is an expansion of a joint project between the ABA and the Bundesrechtsanwaltskammer (German Federal Bar). Since 2012, the two associations have sponsored the exhibit, Lawyers Without Rights: Jewish Lawyers in Germany under the Third Reich, a project of the ABA Center for Human Rights. Like the book, the exhibit’s 25 panels include short bios of Jewish lawyers from throughout Germany and outline the Nazi’s systematic approach to purge all lawyers and jurists with Jewish backgrounds from the legal profession.

The book contains more than 1,600 bios of lawyers in Berlin who could no longer practice law after 1938 because of their Jewish ancestry, and notes the fate of 1,404 of them, including scores who committed suicide and more than 200 who found their way to the United States, as well as some who became lawyers here. The English-translation of German author Simone Ladwig-Winters’ book has prefaces from the Berlin bar, the author’s insights into her research and source notes.

“The story of these lawyers in Berlin and all of Germany is more than a historical footnote; it is a wake-up call that a system of justice free of improper political considerations remains fragile and should never be taken for granted,” ABA President Bob Carlson said. “When lawyers, the judicial system and the just rule of law are undermined, when the abuses go unchecked and are permitted to flourish, only great tragedy can follow. Through this book, we hope to expand delivery of that message to far more Americans than the Lawyers Without Rights exhibit can reach.”

Kristallnacht Stories and Events from previous years in the Oregon Jewish Life Archives: