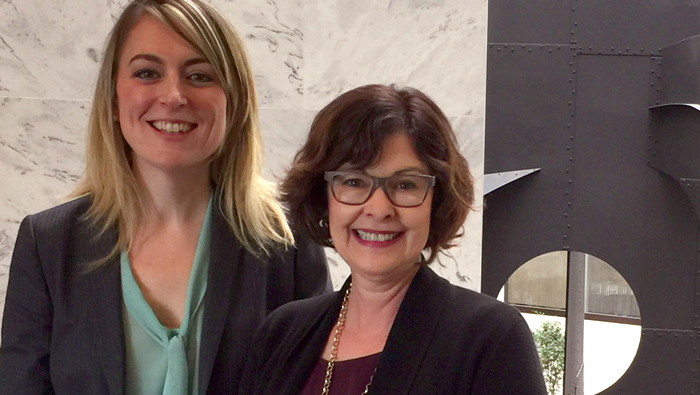 On Feb. 16, more than 200 nonprofit leaders from across the nation representing a diverse group of charities gathered on Capitol Hill to urge lawmakers and their staffs to protect charitable giving in America as part of the Charitable Giving Coalition’s “100 Years of Giving Fly-in.”

Julie Diamond, executive director of the Oregon Jewish Community Foundation, and Dawn Johnston, major gift officer of Peacehealth Southwest Medical Center in Vancouver, WA, joined the effort. Participants from 37 states met with more than 125 House and Senate offices, including 52 meetings with members of Congress who serve on the tax-writing committees.

“Our meetings went well,” says Julie. “Everyone seemed to appreciate their constituents traveling to Washington, D.C., for discussions about the importance of sustaining and even expanding charitable tax deductions. There are tax proposals being floated that are likely to reduce charitable giving in the United States, largely as an unintended outcome. Dawn and I were excited to represent Oregon and Southwest Washington and be advocates for our communities and our donors.”

Julie says she plans to continue tracking the issue and being an advocate for OJCF and the community.

This year marks the 100th anniversary of the charitable tax deduction. The CGC is urging lawmakers to recognize this remarkable milestone and preserve this tax incentive that encourages individuals to give away more of their income, investing it in their communities. The “100 Years of Giving Fly-in” served as a kickoff for the CGC’s work during the 115th Congress.

“This is a critical time for the nonprofit sector,” says Michael Kenyon, president and CEO of the National Association of Charitable Gift Planners. “Congress is poised to undertake the largest rewrite of the tax code in over 30 years, and whatever lawmakers ultimately do this year could have an enormous effect on charitable giving in this country.”

Giving USA reported that Americans contributed more than $265 billion to charities in 2015. More than 80% of those dollars are given by taxpayers who itemize and use the charitable deduction. As lawmakers are drafting tax reform legislation, several provisions have been proposed that would alter this valuable tax incentive in ways that could significantly reduce charitable giving

“The notion of an above-the-line, or universal, charitable deduction is one that has come up in many of the meetings that we have conducted,” says Chris Gates, executive vice president of external affairs at the Council on Foundations. “I think lawmakers are open to it, and I think some are often surprised to hear that when you triple the standard deduction, the number of itemizers would be so greatly reduced. So, I think meetings like these are critically important to ensure that these issues are put on the radar of members of Congress.”

The CGC formed in 2009 in response to proposals by the Obama Administration and members of Congress to limit the tax deduction for charitable contributions. As Congress and the Trump Administration contemplate comprehensive tax reform, the CGC remains a relevant, constructive voice.