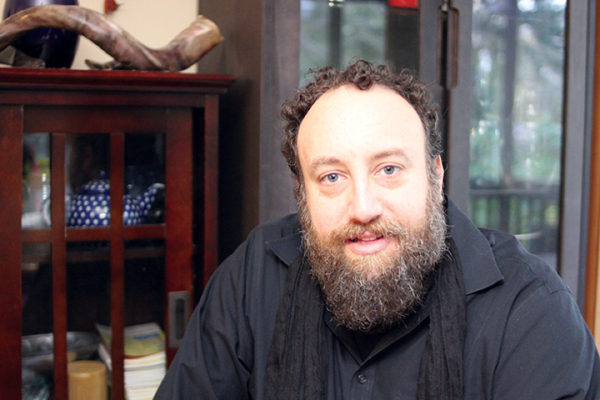 Josh Safran has built his life and his profession on rebellion. Though being a lawyer, an observant Jew and married father of three doesn’t normally scream “revolution,” for a man like Josh it’s all very much part of a life going against the grain.

As he describes in elegant and often painful self-awareness in his 2013 memoir, Free Spirit, Josh was raised by a mother who was a flower child. Born to committed leftists herself, Josh’s mother was a hippie in the ’60s who gave birth to him while living with a coven of witches on Haight Street in San Francisco. As the 1980s came around, she brought young Josh with her on countless “adventures” through commune living, homelessness and deprivation. Often going without things like plumbing, food, school or any semblance of order, Josh rebelled against the only lifestyle he knew. At age 9 he became an Orthodox Jew.

Noting that he grew up with idol worshippers, he compares his journey to Jewish observance to that of Abraham. “The Jewish tradition is great for people like me, I think,” says Josh.

Josh frequently highlights this concept – that Judaism provides a specific home for rebels. That will be at the center of his upcoming speaking engagement in January at the Institute for Judaic Studies in Portland (see below).

As the child of a flower child, bouncing around from one reckless experience to another, Josh’s transition to both Judaism and the structured learning of school was bumpy, and only confirmed his place in life as someone going against the grain wherever he was.

“I didn’t understand the conventions of a classroom, like raising your hand, not swearing, not calling your teacher a racist or the President of the United States a war criminal,” says Josh of the rough transition to civilized society as a kid.

Though his mother lived an unconventional life, she’s still his Jewish mother, which is part of what makes reading his book interesting. Trying to wrap one’s head around this type of truth and openness about family is challenging.

“I struggled with it from a halachic perspective,” says Josh.

“So I consulted with my good friend, Rabbi Judah Dardik.”“Dardik was his rabbi when his family was living in the East Bay in California. “And he said ‘your story is not merely your story, it’s meant to cast light on a generation of people and a set of experiences in common.’ ““But of course, Josh also worried what his mom would think.

“Thank God, she’s been super-supportive of the telling of this story,” says Josh.

His memoir features the type of gripping, unvarnished accounts that make the best writing memorable. And most of it can be anxiety producing, even when amusing.

“My childhood played out in two acts, and the second act was what I consider the ‘dark act,’ when my mother teamed up with this Marxist guerilla commander from El Salvador who was a violent alcoholic…,” says Josh without a hint of self-pity.

But to start the story there is a serious digression.

“I’m already fudging it by beginning with my birth,” says Josh, dryly noting that he technically can’t remember it. The act of remembering and telling one’s story is at the heart of at least two of Josh’s biggest projects.

Before writing his memoir, Josh was part of a pro bono legal team, along with attorney Nadia Costa, representing Deborah Peagler. While serving a life sentence in prison for her involvement in the murder of her viciously abusive husband, Peagler became a model prisoner, a valuable worker and beloved mentor. Costa and Safran worked to free her under a thennew California law that allowed courts to take past abuse into account during trial and sentencing for women who lashed out against their abusive partners. Their fight for Peagler’s release was the subject of the critically acclaimed 2011 documentary, “Crime After Crime.”

“Since that fight, which was a rebellion against the state of California and its aggressive incarceration of minority women, Josh has become a nationally recognized advocate for survivors of domestic abuse.

Not every case is like Peagler’s, though, and he earns a living through his Berkeley-based law firm. He splits his time between his California law practice and his home in Portland, where he lives with his wife and three daughters.

“I still do land use, real estate and commercial litigation,”“says Josh. “The main place that the government regulates people when there isn’t a crime is their land,” which is what he says motivates him. It’s the same thing he will speak about in January and at his other engagements.

“I’ll talk about the book, some of my experience with Debbie (Peagler), but I also hope to talk about what – in many ways – is most awesome about the Jewish tradition … its celebration of the outsider, the rogue, the rebel,” says Josh, with a smile and perhaps a glint in his eye.

Ygal Kaufman is a freelance writer in Portland. In addition to writing, he does photography, video, audio and graphic design, as well as curating film screenings.

WHO: Joshua Safran, “Lessons from Growing up On the Road and Off the Grid” based on his book Free Spirit