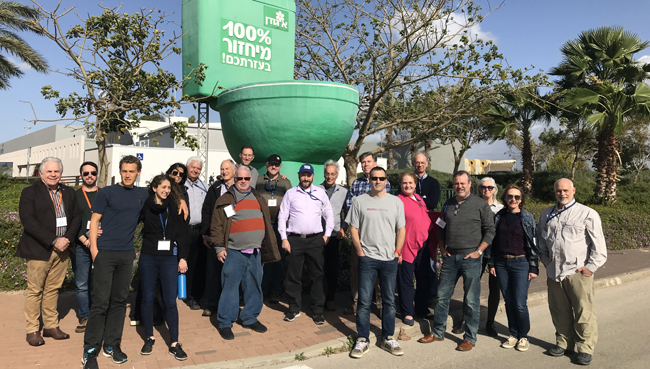 The Bible suggests that Israel is a land flowing with milk and honey, but today, with steadily decreasing amounts of rainfall and drought conditions, flowing water is perhaps more essential.

(To get involved with JNF in the Pacific Northwest, see our article or contact JNF Pacific Northwest Director Josh Lipsky at  JLipsky@jnf.org or 206-760-1188 ext. 94 or Portland JNF organizer Dan Spear at danspear7@yahoo.com or 971-570-9005.)

The H20 Tour began in the North with a visit to the Sea of Galilee, where participants learned about the complicated world of geopolitics and hydro-politics that exists in today’s drought-ridden Middle East. They toured the Sorek desalination plant near Tel Aviv, the world’s largest seawater desalination plant, and the Shafdan wastewater treatment plant, where treated wastewater is sent to the Negev Desert for use in agricultural irrigation.

Jewish National Fund has built over 250 reservoirs throughout Israel, which has raised the amount of recycled water in Israel from 4% to over 85%. In addition, over half of Israel’s agricultural water comes from recycled and reused wastewater, and most of that water is supplied by JNF-built reservoirs. Today, JNF has embarked on a $200 million campaign to build 90 more reservoirs so that Israel may reach 100% recycled water capacity.

Bob Lembke, mission chairman and president of United Water and Sanitation District of Greenwood Village, Colorado, explained, “The goal of the tour is to bring Americans – Jews and non-Jews – to understand the incredible transformation that’s been made by Israel.

Water planning here is among the best in the world and the integration of waste water and agriculture is unique.”

Perhaps one of the most fascinating days on the tour was spent in the South at the Dead Sea and the Arava, a desert valley extending from the Dead Sea to Eilat, where, utilizing JNF-supported projects, more than 50% of Israel’s fresh vegetable exports are produced. The group first stopped at the Dead Sea Works, the third-largest source of potash in the world, and one of the major economic anchors of the Negev, where Dr. Clive Lipchin, director of the Center for Transboundary Water Management at the Arava Institute, described both the high level of cooperation between Israel and Jordan in the area, and the dangers caused by the receding water levels of the Dead Sea. Dr. Lipchin spoke about JNF’s important work and role in helping improve the quality of water for local Bedouin communities by bringing on-site wastewater treatments to Bedouin villages. 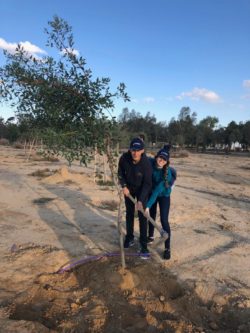 Gary Gold and Shana Weitzen on the JNF Water Mission.

Further south, on Moshav Hatzeva in the central Arava, JNF has established an innovative agricultural research and development center, where cutting-edge technology has improved crop yields.

Dr. Effi Tripler oversees soil and water research at the Arava research and development facility, and described the difficulties growing vegetables in the desert. “There is high demand, low water availability, and poor water quality. Despite this, the Arava is green. This is actually a miracle,” said Dr. Tripler. “That it is green – despite all these constraints and difficulties – is because of the research and development achievements that are made in the agricultural research institute.”

Participants in the H20 Tour visited the greenhouse and enjoyed tasting the colorful peppers grown there, as well as exceptionally sweet dates from the date palms in the moshav.

“JNF established the Arava Task Force in 2010,” she explained. “It explored initiatives that would benefit the area and would encourage those who already live there to remain, and those who hadn’t yet arrived to come and reside in the area.”

With the closest hospital nearly 80 miles away, JNF built a medical center for residents of the Arava, and also added five kindergartens, and a community center to accommodate a growing population. An emergency response center is also nearing completion, and an indoor pool is being built. “We are trying to do as many projects and initiatives as we can to encourage the population to stay and grow and do better,” Tzour Avner added.

Noa Zer, who lives in the area and is a member of the Arava Regional Council, describes the positive atmosphere that is present in the Arava. “What inspires me about the Arava is that we are creating something out of nothing. When there is a will there’s a way – everything can be achieved. This is the spirit of the community.”

Participants in this year’s Israel H20 Tour included first-time visitors to Israel as well as veterans from previous trips, who found the trip to be both informative and enjoyable. Gary Gold and Shana Weitzen, newlyweds from Scottsdale, Arizona, partook in this trip as part of their honeymoon. “We’ve learned a lot and we met great people from all over the country. We learned a lot not just about water, but Israeli politics in general. Everyone has been very welcoming. We’ve both been here before and it was great for us to come back.”