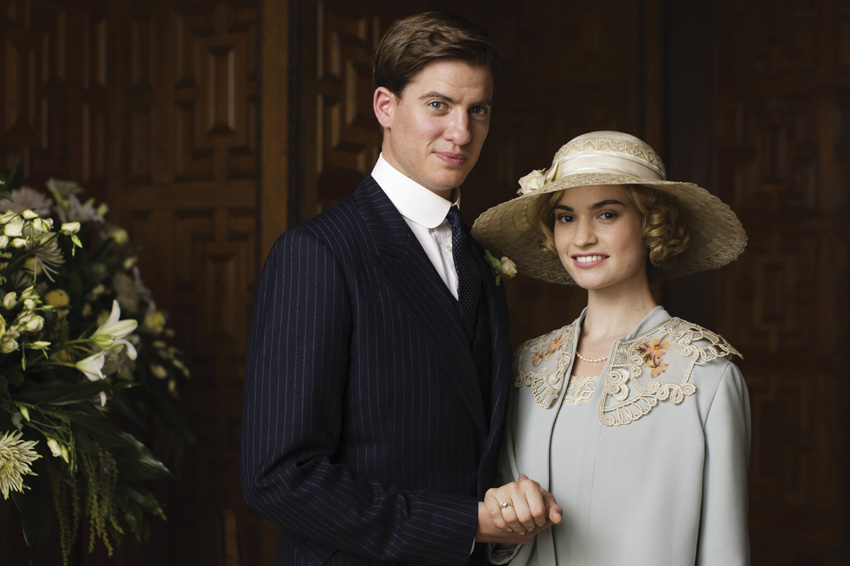 While Lord and Lady Grantham welcome the new arrivals with exquisite manners and the perfectly calibrated amount of modest warmth, series creator and writer Julian Fellowes is a good deal less hospitable. Fellowes has devised a nuclear family of cardboard cutouts that fit unflattering Jewish stereotypes and generate viewer antipathy.

Before we rush to judgment or leap to conclusions, however, we should allow for the possibility that the uncomplimentary presentation of the Aldridge family in Season 5 is merely a teaser for Season 6 (and beyond, given the series’ extraordinary popularity in the colonies). It’s not a stretch to imagine Fellowes using the Aldridges as a means of exposing and examining British anti-Semitism as “Downtown Abbey” rolls into the late 1920s and early 1930s.

As everyone knows, PBS’ hit Masterpiece series has long featured a character with Jewish ancestry. Lady Grantham, aka Lady Cora Crawley, is the American-born daughter of the late Isidore Levinson. Cora is Episcopalian, like her mother, but she doesn’t view Jews as “the other,” needless to say.

I must reveal a spoiler or two at this point, namely that Lord Grantham’s niece, Rose, doesn’t see Jews as different, either. That is, not when they’re as hunky as Atticus Aldridge, a square-jawed banker’s son who chivalrously shelters Rose with his umbrella in one of the least-inspired meet-cutes in the annals of television.

One could trace Rose’s open-mindedness to last season’s color-blind liaison with a black jazz singer, and her naive modernity to her fight with Lord Grantham over bringing a wireless into the sacred realm of Downton Abbey.

But Atticus (played by Matt Barber) is so bland, so assimilated and so devoid of personality that he wouldn’t register as Jewish if he didn’t tell us. In other words, Rose is smitten with an Englishmen of her status and breeding, and whose Jewishness is incidental rather than fundamental.

In fact, the moment when he confides that he’s descended from Jews who left Odessa after particularly brutal pogroms doesn’t belong to him but to his listeners – bitter, broke Russian expatriates of the pre-Revolution regime who insult Atticus over their shoulders as they walk away.

Now Atticus is of the right class and has parents of means, and those are the credentials that matter in Downton’s rarefied world. But his perpetually unsmiling father, Lord Sinderby, is less sanguine about his son’s involvement with a shiksa, and the utterance of the epithet stamps him as intolerant and cinches our dislike.

There are certainly valid arguments against intermarriage, and Fellowes could have written an impassioned monologue for Lord Sinderby that expressed the costs and worth of Jewish identity, and the weight and meaning of traditions and rituals. Instead, Lord Sinderby has a couple of angry lines that leave the impression that he prizes money and influence above all else.

While much is made of Lord Sinderby’s family values, namely his hatred of divorce, it’s presented as evidence of his inflexibility and anachronism rather than allegiance to vows and moral behavior. As for Lady Sinderby, she is totally gracious and agreeable, but in an unwaveringly superficial way.
To keep things in perspective, “Downton Abbey” is an upstairs/downstairs soap opera that is generally more concerned with the romantic complications of its female characters (Lady Rose, in particular) than with the big picture of class-conscious Britain.

In the last episode of the season, Lord Sinderby is revealed to be a major hypocrite with a child by a mistress. In the context of “Downton Abbey,” this feels more like a critique of the upper class’s proclivity for moral double standards than yet another dagger at a chilly Jewish character. Any doubts are extinguished when the sequence ends with the humbling and humanization of Lord Sinderby as a man who can admit his fallibilities and accept Rose in the bargain.

I find the series most interesting, though, when it invokes and reflects the changes in British society after World War I (and evokes contemporary parallels). Julian Fellowes has introduced a story arc that’s tailor-made for illuminating anti-Semitism between the wars. On those grounds, I’m already anticipating Season 6, which begins in January.