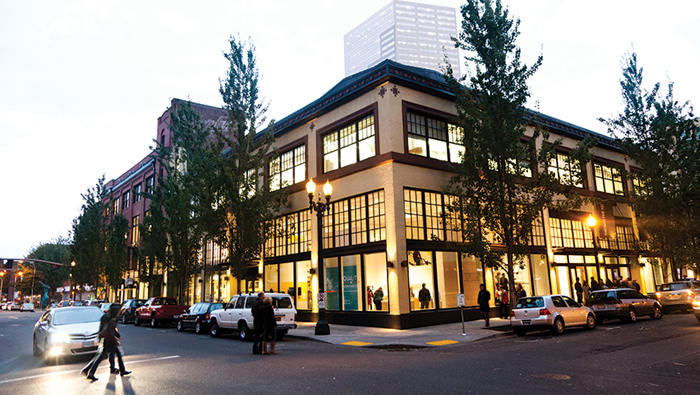 The Oregon Jewish Museum and Center for Holocaust Education will have a permanent home thanks to the  purchase of the former Museum of Contemporary Craft, 724 NW Davis in Portland.

The purchase agreement was announced July 6. The museum will remain open until Sept. 25 in its leased space at 1953 NW Kearney St. with its current exhibition, Every Minute Counts – Photographs by Katherine Joseph. The museum will reopen in June 2017 in one of Portland’s prime art destinations, allowing OJMCHE to reach many more visitors through First Thursday openings and greater visibility. The move will expand OJMCHE’s footprint from the current 6,900 to near 15,000 square feet.

During the closure, OJMCHE will continue to offer educational programming such as tours of the Oregon Holocaust Memorial and South Portland Walking Tours, as well as outreach programming in classrooms statewide.

Founded in 1990, the mission of the OJMCHE is to interpret the Oregon Jewish experience, explore the lessons of the Holocaust and foster intercultural conversations.

“I want the Oregon Jewish Museum and Center for Holocaust Education to follow to the rapidly emerging consensus that the most successful museums of the future will be places to hang out, engage and contribute: museums that blur the boundaries between what goes on inside the museum walls and what occurs outside,” said OJMCHE Executive Director Judy Margles. “I want the museum to be the moderator and filter of shared wisdom and diverse perspectives, in addition to being a source of scholarship. I want to represent the plurality of voices in our community, and I want our programs to address community concerns.”

A July 6 announcement from Margles and Board Chair Elaine Coughlin attributed the purchase to “the hard work of our board, in particular outgoing Board Chair David Newman, and the visionary leadership of a small group of key donors. … Through the galvanizing of our community, we were able to act quickly and, within a few months, a group of just over 30 donors helped us raise the $5 million to purchase a top tier museum space.”

“Securing of a permanent home for the Oregon Jewish Museum and Center for Holocaust Education safeguards a cultural treasure for generations to come,” said U.S. Senator Ron Wyden (D-OR) in a press release from OJMCHE. “Through its programming and exhibitions, this vital community institution focuses on the need to uphold democratic values and support human dignity through education and outreach. In an era where we are facing global issues of displacement, migration and racism, it is institutions like this museum and education center that are educating our next generation while also shaping Oregon’s cultural landscape.”

“It is great news that the Oregon Jewish Museum and Center for Holocaust Education has found a new home in the previous Contemporary Crafts Museum space,” Regional Arts and Cultural Council Executive Director Eloise Damrosch said when the purchase was announced. “Not only is the footprint ideal for the museum’s needs, but it will also bring much greater access and visibility to this important cultural organization.”

“My mother and I and my late father have always felt that the Oregon Jewish Museum plays a critical role in our community,” said Jordan Schnitzer in the press release announcing the purchase. “It is so important for young people in our community to understand their roots and for others outside of our faith to better understand the role that Jewish pioneers and citizens have played in our community. We are proud and honored to participate in this fundraising and would like to personally thank all those who joined with us.”

During the museum’s closure, the staff will move the archives to the new facilities where they will be housed in a secure, environmentally controlled space specifically designed to store archival collections. Dating back to 1850, the archives include 12,000 historical photographs, of which 1,260 are catalogued and accessible, and 750 archived collections including Judaica, fine art and Holocaust-related pieces.

The new facilities will provide better public access to OJMCHE’s collections with a private reading room where researchers can make appointments to work on projects. A private space will be available to listen to oral history recordings and to read transcripts from 650 oral histories collected over the past 40 years.

When OJMCHE reopens, along with rotating national and international exhibitions, the museum will have permanent exhibitions focused on discrimination in Oregon, the history of Jews in Oregon and the Holocaust. The eight-month closure will allow the museum staff to work with curators and researchers to create these new exhibitions, which will be located on the facility’s second floor.

The space will offer areas for reflection and conversation with a gift shop and a cafe on the ground floor. OJMCHE’s public programming – films, lectures, symposiums and partnered community events – will be able to reach a larger audience with a new auditorium that seats 120 people.

OJMCHE is a statewide leader in social justice education with over 3,500 students and teachers participating in docent-led tours at the museum and the Oregon Holocaust Memorial in 2016. The museum’s new home will provide state-of-the-art facilities for social justice education with an auditorium equipped with AV equipment, labs for hands-on arts and culture projects, and space to give in-depth, focused programming.