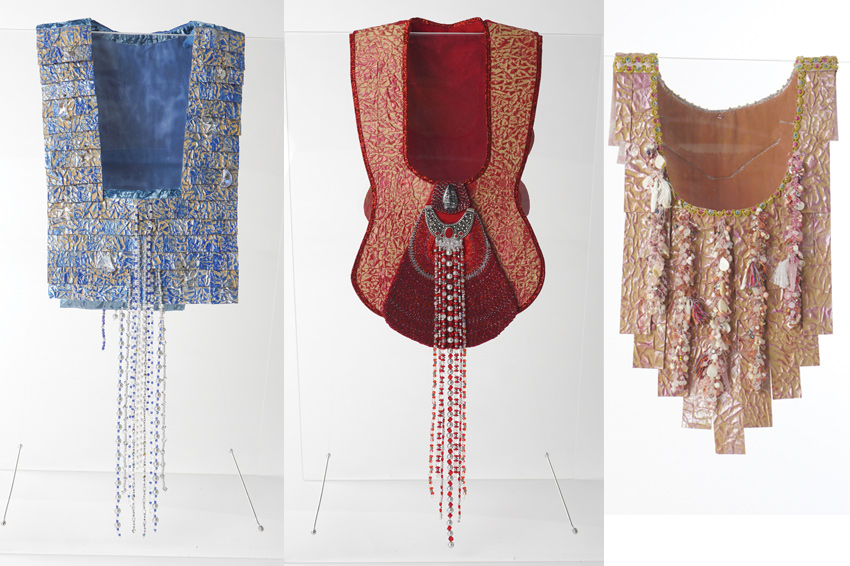 Torah offers enough about the patriarchs that we can surmise Esau needed a better razor than Jacob, and Abraham was hospitable. But Torah is less forthcoming about the matriarchs.

From Sophie Portnoy to Helen Seinfeld, strong, vibrant Jewish mothers have long made their mark on us. Were our imahot, our matriarchs, similar to Jewish mothers today? How did they see themselves? How did they adapt to their roles? Which of the matriarchs was most seductive? Most duplicitous? Who kept her sisters laughing with her wit in the red tent?

A year and a half ago, Temple Emek Shalom member Nancy Pagani, an Ashland fabric artist with more than 30 years’ experience in quilting and textile work, began wrestling with such questions. Nancy has created art in the Rogue Valley since 2001 when she became a founding member of AMBUS Contemporary Art. Her quilting has been exhibited locally and nationally, including at the Museum of the Americas in Madrid, Spain. She was profiled in the documentary “Woman’s Work: Making Quilts – Creating Art.”

Contemporary author and Torah scholar Aviva Zornberg wrote, “Women have a separate hidden history which is not conveyed on the surface of the text.”

Nancy believed it was time for them to emerge from Torah’s white spaces by creating what she calls “visual midrash.” But how could an artist coax the earliest Jewish mothers’ personalities from parchment?

To Nancy, a deeply committed Jew by choice and founder of Emek Shalom’s Temple Arts Committee, this was more than casual curiosity or a whim: this was a mission. How could she best apply her fabric art to this rejuvenation?

“I believe that the emotional makeup of humans hasn’t changed much over the millennia,” Nancy remarks.

“Artists can make use of the emotions and feelings to tell a new story.”

At Torah study of Tetzaveh in which the priestly vestments are described, Nancy felt a compelling tug – if the men had breastplates (ephodim), perhaps the women should, too. Drawing from Torah and Talmud, The Hebrew Goddess (a text by Raphael Patai), and other sources, Nancy began teasing the colors of each matriarch from the white spaces.

While designing the breastplates, her sixth sense began to “hear” the voices of these ancient Jewish mothers. Some were quite voluble. “The matriarchs, with the exception of Rebekkah, conveyed their voices,” says Nancy. “Rebekkah was not forthcoming, so I projected what she might say.”

Once she began to hear the matriarchs, Nancy expressed their emerging personalities in fiber. Mesopotamian texts from the time of matriarchs indicate that fine raiment, including fabrics woven of gold thread and embellished by jewels, was worn by the priestesses to indicate their status. Using artist-dyed silk and cotton fabrics, brown kraft paper (wrinkled and treated with metallic paint) and hand-sewn beads, Nancy fashioned the ephodim.

Sarai’s breastplate came first in April 2013, followed by those of Leah, Lilith, Rebekkah and Rachel. The project is ongoing, and Nancy is currently working on Hagar’s ephod.

Sarai’s name means princess or chieftainess. The first thing Sarai expressed to Nancy was, “I am priestess of the moon.” That gave the artist a starting point. What would a priestess of the moon wear? Blue and silver for the sky, perhaps. Jeweled moons and stars for embellishment.

While not known for her beauty, Leah was fertile, a desirable trait in her time and culture. Was she an example to other women to keep birthing? According to Torah and Talmud, having so many children did not make her more beloved of Jacob.

Lilith couldn’t wear actual garments, because according to Genesis, clothes didn’t come along until Eve’s time. But Lilith had a ribcage. Nancy explains, “She guided me. When I painted the ribcage, Lilith deemed it to be too ‘pretty.’ She didn’t like that. ‘No, not that. Yes, this is right.’ And ‘You think I’m trouble? Look what happened when Eve listened to the snake.’”

For Rebekkah, Nancy culled the clues offered by Torah. “Rebekkah left the safety of her own home and tribe to journey into the unknown. Beautiful Rebekkah, who fell off her camel upon seeing Isaac; Rebekkah, who had to hold her world together through trauma and family politics. She was caretaker of a good man who had experienced the akeda. No pretending that it didn’t affect Isaac, and thus Rebekkah. Her heart ached for having to deceive him, according to preordained decisions. And her heart ached for losing her sons to their far-away destinies.”

Rachel had a sister, who gave birth multiple times while she herself remained barren. She loved her husband Jacob; it hurt to see him father her sister’s children. But she had spirit and gumption. And like Rebekkah before her, she wasn’t above a bit of deception.

From the feral power of Lilith’s rib plate to the celestial delights in Sarai’s breastplate, the matriarchal ephodim inspire our perceptions of these ancient Jewish mothers, giving them zoetic force.

As Nancy puts it, “Mothers through the centuries have held the lineage. These matriarchs were the beginning, and we honor our own mothers for continuing this very valuable task.”