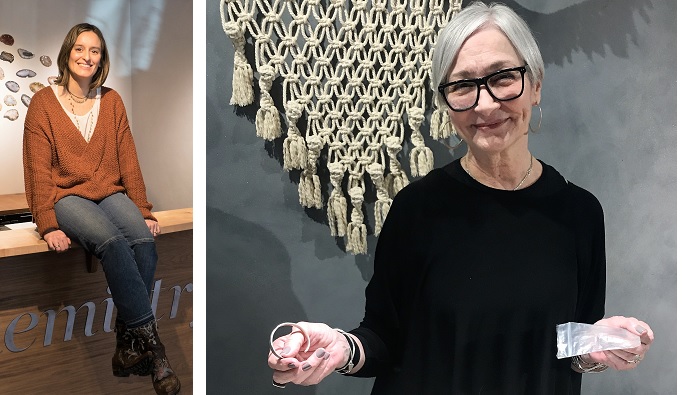 Chemistry Jewelry Store in downtown Hood River is my first stop on monthly visits to Hood River. I’m like a kid in a candy store as I scan the glass cases filled with jewelry. I adore the owner, Christine Barthmus, who loves to talk about her travels to buy beautiful pieces and share information on the artists and the materials they use.

Last June when I stopped in, renowned jewelry designer Saundra Messinger was there preparing for a trunk show.

Saundra was displaying her jewelry, and I quickly realized I owned several of her pieces.  I was a bit awestruck. I knew her home and studio were on the East Coast and had no idea she was in Hood River. Her exquisite work has been photographed and featured in Vogue, In Style, Lucky and More. Her work can be found in many art museum gift shops and in The Sundance catalogues. I was struck by how approachable, elegant and interesting she is.

Saundra will be back in Hood River the weekend of June 9 with her trunk show at Chemistry.

Her path to jewelry has been an exciting journey from singing in Manhattan to working with clothing designer Eileen Fisher. In 1999 Saundra struck out on her own to become a designer and caught the attention of Vogue magazine, which called Saundra’s style “cutting edge” and described her work as luxurious, primitive, sophisticated and even unpredictable.

Saundra grew up near the Mississippi River and now lives near the Hudson. So maybe it’s not so unusual that Saundra is drawn to the Columbia River. The following interview with Saundra has been lightly edited for clarity and brevity.

Where did you grow up?

I grew up in Memphis, TN, with a sister who is five years older. We sang together as kids, The Messinger Sisters. She was really the better singer. My parents were very musical. They were beautiful, kind, loving and supportive people, and I miss them every day.

Did you grow up in a Jewish home?

I grew up in an Orthodox home. Not ultra-Orthodox, but we kept kosher, changed all of our dishes for Passover and went to shul. We lit candles and blessed the wine on Friday nights. I remember the seders, Shabbat dinners, my father’s tallis and my mother waving her hands as she blessed the candles. These were some of the most meaningful moments of my life as I was growing up.

What did you do after high school?

I went to college in Memphis and studied education. I loved the student teaching year. My first year out of college I worked as a substitute teacher. I didn’t love that. The next year I was offered a full-time teaching position where I would have to teach five different subjects each day in a school that had a terrible reputation in many areas. I guess I didn’t love teaching enough to do that.

I got a job at the Jewish community center as the cultural arts director, a job I really loved.

How did you go from Memphis to Manhattan?

I was a singer my whole life. Our family took a trip to New York, and I decided then and there that New York City was where I was supposed to be. When I was 25 I picked up and moved there. I was lucky enough to have many survival jobs as I pursued my singing career. I studied voice and method acting while I was working full time or in several part-time jobs. I paid my dues.

I auditioned for a very cool nightclub in New York, and they hired me for a weekend gig with six weeks to prepare! I went to my voice teacher and told him I had to put together a nightclub act in six weeks and he laughed; but we did it! I did my own PR as ‘Morgan Kassel’ and got lots of press including in the impossible, the ‘Going Out Guide’ in The New York Times. I sang to packed houses. I continued to do club work in New York and eventually also started doing some studio work including jingles. I was the voice of “Windjammer Cruises” and a number of other products.

This all led to the most important moment of my life – meeting my husband, Chuck Irwin, a recording engineer in a recording studio.

Tell us about your family.

I married the love of my life. I was 40, and Chuck was 50. We made the decision not to have kids; it was the right decision for us. Our family life is rich and full with siblings, cousins, nieces, dear friends who have become family and our dogs. We only have one dog at a time, but they have been spoiled rotten and have stolen our hearts.

What was the impact of working with Eileen Fisher?

I began as Eileen’s assistant. When I left I was the executive vice president. I was there when the company was very young and there were exciting entrepreneurial opportunities to grab. I created the PR and advertising departments. I launched the company’s first national ad campaign, produced runway shows and photo shoots. We shot Isabella Rossellini, my mother’s favorite actress, and I was able to get an autograph for her. The experience I’d gained doing all those survival jobs in New York became very important in helping me do my work in this big company.

How did your love of jewelry design begin?

My love of jewelry and fashion began with my mother, father and sister, who were all very stylish. My mother had an incredible collection of costume jewelry, and I paid close attention to the way she mixed and matched her earrings, bracelets, necklaces and rings.  I also watched my father, a very spiffy guy. He was all about a breast pocket square, cuff links and a special tie tack. I have a number of pieces from both of them that I treasure.

I got seriously into jewelry when I was working with Eileen Fisher. Chuck and I had done an album together, and I finally felt that I had achieved my goal, lived my dream and had started looking for something else to do. A very small part of my job at Eileen Fisher was buying jewelry and accessories for all of her retail stores. I enjoyed working with the jewelry designers, and I also tried to redesign their lines. One of them told me, “You’re a jewelry designer.” When I left Eileen Fisher, I thought it was time to do my own thing again. I’ve never been afraid to jump into things I don’t know how to do, so I decided to figure out if that designer was right – if I was actually a jewelry designer. I knew nothing. I had to learn 8,000 new things every day or it wasn’t a good day. It worked out!

Did Christine at Chemistry Jewelers find you, or did you find Christine in Hood River?

I found Silverado and was lucky enough to land a spot in all of the stores when they were all connected. That relationship gave me the incredible opportunity to begin working with Christine in Hood River in what is now Chemistry. She is a remarkably talented, kind, fun and smart woman.

This is my third trip to Hood River. I don’t do a lot of traveling or a lot of trunk shows, so the trips I do schedule have to be meaningful. The time I spend in Hood River is worth it. I love the staff, the customers and the scenery – all every bit as important as the business.

What advice do you have for jewelry artists and business owners?

Don’t ever let an obstacle become a roadblock. Figure out a way to do what has to be done. Learn what you need to know. Don’t be afraid to ask questions. Don’t let your ego get in the way of listening to feedback. Be kind and generous with your staff, your customers, your suppliers and contractors. It comes back to you in the most amazing and surprising ways.